I know it’s something we say all the time, but I can tell you without a doubt that time flies because I know it was only yesterday that this happened: 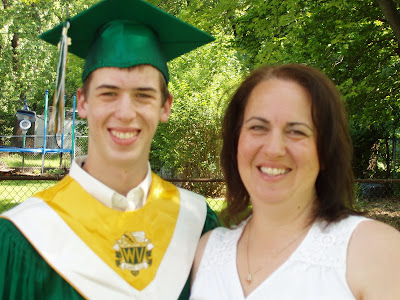 And then suddenly, this past Sunday, this happened:

That’s right. It’s been four whole years since I was wondering how this house would feel when our older son left for college and it was just the three of us, and now we’re already a year into being empty nesters.

D’s graduation from college over the weekend (Mom brag: graduation from college with honors!) was lovely. It was a proud day for our entire family, and I watched in amazement as he moved through the morning and then the ceremony itself with confidence and pure ease. I reflected on how, just a little less than four years ago, Jim and I dropped him off at his new school for freshman year. He knew nobody, and like most other new students leaving home for the first time, he was cautiously excited while a little unsure.

We heard from him a lot back then; he called us just to say hi and to ask for advice (but never, as the college kid stereotype goes, for money). Over time as he acquainted himself with his classmates–and became tight with the same group of guys he considers to be his best friends today–we didn’t get as many nervous phone calls. And we didn’t mind. That’s how it’s supposed to be when your kid spreads his wings.

He started college not wanting to be involved in any extracurricular activities, especially the campus Greek system. He finished college having held several on-campus jobs, several board positions in multiple clubs, and, surprisingly for all of us, having become an extremely active member (and officer) of a non-secret fraternity, Delta Upsilon. Oddly enough, I think we all realize that his involvement in DU shaped him more than just about anything else at school. The same guys with whom he became close in freshman year, the guys who were his roommates and across-the-hall dorm-mates, eventually became his DU brothers. They are awesome young men too. Besides D’s Bachelor of Arts in Graphic Design, those fraternity brothers are all he will take with him on the next part of his life journey.

Our seats at the ceremony were towards the back, but we had a straight-on view of him in his aisle seat. I watched him greet the many, many friends he made over his four years there as they walked past him to find their own seats during “Pomp and Circumstance”, turning to face the aisle, waving at someone, and then turning to the front again. He repeated that process over and over. It made me smile. Friends at college become chosen family, and I love that he created his own network while away from home.

My mother-in-law asked me if I thought he was looking for us in all that commotion.

“Oh no,” I said, “he’s not even thinking about us right now. He’s seeing some of his friends for the very last time. We’re the very last people on his mind.”

At that exact moment, as I watched him say hi to another friend, he suddenly looked up and locked eyes with me, smiling and nodding in my direction. That split second provided my only tears of the day.

What’s next is completely up to him. All I have to do is sit here and be a proud mom, and try and figure out a way to slow down the passage of time before the next milestone, whatever that may be.

Tagged as: Beyond Awesome, Commencement, Parenting

Previous post: Separated At Birth, But This Day Is All Hers.