A little more than two years ago, D sold his first car to an old friend from Cub Scouts. The car, it seemed, was well on its way to having problems that would have been too expensive and time-consuming to fix (even after a total engine rebuild) for a college freshman, and it was with a heavy, heavy heart that he got rid of it. I wrote about it here and included one of my favorite pictures ever when it comes to “a picture is worth a thousand words”: 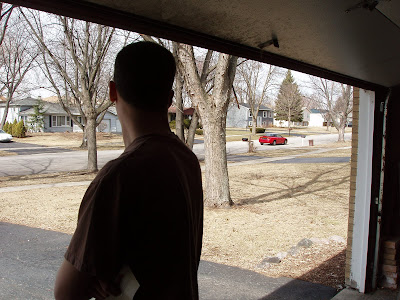 For two years, D has been heartbroken over that car, especially because the young man who bought it took amazing care of it just like we knew he would and it was difficult for D to watch, but he couldn’t look away. There were some customizations that made D drool, and there was even talk between the two of them that D might buy it back some day. Unfortunately for my son’s heart, it wasn’t meant to be: he realized that the car–now even older, of course–looked and ran amazingly well when his friend was ready to sell it, but it wasn’t a practical investment for him, and he had to let it go.

Oddly enough in these last two years, his younger brother J has been a car-buying machine. First there was Zeus, the Neon. Zeus ended up needing a major repair so he sold it and bought the car-that-shall-not-be-named, which had problems that made us all miss Zeus terribly. Finally, in a case of “The third time’s a charm!”, he ended up with his current car, which I laughingly refer to as “Lucky”, though now that I think about it I may start calling it “Tres”. But I digress.

I can imagine it’s pretty difficult for a young adult male–or anybody, for that matter–to have his own car (i.e. freedom!) (i.e. not depending on others for rides) for a couple of years and then go without a car for a couple of years. I’m sure it’s also hard to see your younger brother buy and sell three cars (for whatever reason!) in the meantime. Though they get along very well overall, the two-way ribbing on just about everything has extended to cars, too, each one giving the other a hard time about every car-related choice there is. That’s why the surprise twist ending to this story was especially funny to me.

D has been casually looking for cars while saving money since he sold the first one, and things got serious last week because he’ll soon be moving off campus and will need his own transportation. He ended up finding a car that was within his price range and seems like it’s really solid, and made the purchase last Friday. The weird thing is that I feel like I’m suddenly seeing double. Check out D’s new-to-him car, along side his brother’s:

Tagged as: An Interesting Turn of Events, parenting teenagers

Next post: Test Drive A Cadillac AND Support The Avon Walk For Breast Cancer!