The Day Burt Reynolds Kissed Me

Okay, so it was an air kiss, but I was right next to him at the time and not only was it meant just for me, but there was full eye contact. Let me tell you about it.

There are two theaters in my area (one in my town, and one in my sister’s town, right next door to mine!) that are the kind where you sit in comfy chairs and order from menus (real food, if you want, like burgers and pizza and chicken, but they also–of course–serve popcorn and other movie treats), and servers bring stuff to you. These theaters also host events at least one or two weekends each month (maybe three weekends, who knows?) during which celebrities come for a personal appearance, in conjunction with screenings of some of their movies. My sister has met Corey Feldman and Dan Aykroyd at past events.

Considering the fact that “Cannonball Run” is one of my and Julesie’s favorite movies of all time (not to mention our parents, who have always loved it too), and there would be screenings of that very movie (in addition to “Deliverance”, “Smokey and the Bandit”, and “The Longest Yard”) on the big screen once again after THIRTY YEARS (oh, and that Burt Reynolds RARELY does personal appearances!), we bought our tickets early and made plans to go stand in line to meet Mr. Reynolds.

The movie was at 4:00 today, and Julesie and I met at the theater at 2:00, to get in line. Jim and J would arrive at 3:00, to stand in line for theater seating: they didn’t care much about meeting celebrities.

As we stood in line, we saw all kinds of people. Some were wearing cowboy hats, some were full of tattoos, some were really dressed up (sequins, even!), some were really dressed down. Most were older than about thirty. As far as what people brought to get autographed, that ranged widely too. We saw models of the “Smokey and the Bandit” Trans Am, the 1972 issue of Cosmopolitan (the one in which he posed nude), his autobiography, record albums (yes, he sang!), and we even saw a woman pull out a red, satin bra for his signature (she had not been wearing it; it was in her purse!). Another lady (much older than the younger chick with the bra) had an envelope addressed to “Mr. Burt Reynolds” and carried it in the same hand as a little net bag with some Easter eggs in it. We stood in line behind a couple who brought the glove compartment from their Trans Am to him for signing, yesterday. Today they were back to get the photo of the three of them signed.

At 3:00, it was announced that Mr. Reynolds was taking a thirty minute break to eat, and you’d think that some of the people in line just got bad news about a medical test or their taxes. It’s incredible that people grumbled so much, considering this seventy-five year old man was on his third day of signing autographs and would be sitting there for about eight to nine hours today, not to mention the fact that he has had back surgery recently and the signage made sure to let everyone know that if you wanted a picture with him, you had to sit on the stool right next to him so he wasn’t standing up and sitting down all day.

He came back in exactly thirty minutes (impressive, for a celebrity!), and the line got moving again.

When it was my turn, I walked over to him and shook his hand. I didn’t say anything idiotic like I did the first time I met David Sedaris, thank goodness. (I think I’ve finally conquered that issue! Go me!)

He said hello to me, and I said, “How are you? I bet you’re exhausted after this weekend!” He shook his head and said, “Nah!” He put his arm around me (eek!) and we posed for our picture before I stood up and thanked him, and said goodbye. He looked at me and air kissed at me. I’ll never wash the air in front of my face again!! It was such a thrill, I can’t even express it. The great thing about our exchange was that he made me feel like I was the only person there. There was total eye contact and such warmth, oy vey. SO MUCH FUN.

And now? I have my holiday card picture. (Maybe. If I can photoshop the rest of the family in there.) 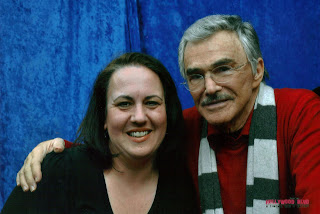 Next post: Hey! ANOTHER New Book About Chicago That Will Rock Your World!