Hey! ANOTHER New Book About Chicago That Will Rock Your World!

As humans, we naturally seek out people who have things in common with us. Though differences make things interesting and I definitely wouldn’t want to spend much time with someone who is identical to me in every way, I enjoy discovering qualities in others that align with mine. Egotistical? Maybe. But you do it too, so don’t judge. (You DO, right?) It’s a warm and fuzzy thing to find that someone else shares my love of, say, the British royals. Or someone who understands my need to make to-do lists because they also make them. Or someone who also gets annoyed at parents who are afraid to say “no” to their children.

I met Margaret all the way back in February (wow!), when I took a tour of the Chicago Pedway with her. Margaret is friendly, and hilarious. I can’t begin to tell you what a strong connection I felt when I met her, and I know that sounds weird, but it’s so true. As she took me and the others on the tour through the Pedway, her passion for her city–my city!–oozed out of her. I totally related. (She also has intense appreciation for the movie “Grease 2”, and let me assure you that you don’t find THAT just anywhere.)

Since then, I have taken to calling Margaret my “City Half”.

Guess what? My City Half has just published a book, just a couple of weeks ahead of mine! (Crazy, right?)

Margaret, who is an improv veteran, loves Chicago comedy. That’s what her book is about, in fact: the history of Chicago Comedy! Check it out: 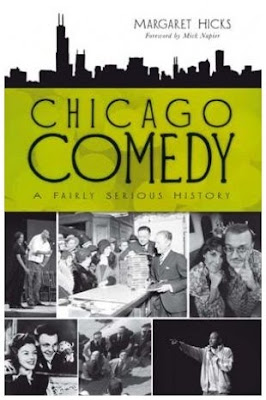 The book officially “drops” this Friday, and I have already pre-ordered. You can pre-order yours, too, at Amazon! Click here!

Best of luck on the book, Margaret. I’m so proud of you!
WE ARE DOING IT!