Jim and I headed to the city yesterday for an overnighter. We had few concrete plans except to stand next to the Chicago River this morning at 10:00 and watch the annual “Dyeing of the Chicago River” for St. Patrick’s Day. (more on that in the next post).

The two of us had all Friday evening to paint the town red, raise the roof, and cause a general ruckus. We were very, very excited to let loose in the city and looked forward to a wild night.

5:42 p.m.
Arrived in Chicago at Union Station. Hailed a cab for transport to hotel.

5:55 p.m.
Still in cab. Friday night traffic was NUTS. Cabbie was very nice and ultra-talkative as he sped through the streets, taking chances I’d never take behind the wheel.

6:00 p.m.
Checked in at hotel. Got upgraded to a room with a view. Went to room, looked at view in the same way Clark Griswold looked at the Grand Canyon, then promptly closed curtains since we were surrounded by other high rise buildings with windows.

6:20 p.m.
Decided to start our wild and crazy evening by taking advantage of the hotel’s evening reception, which had an open bar. Went there and got a drink. Hung out for a few minutes before heading (on foot) to dinner. 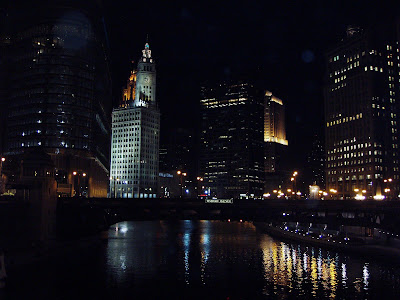 6:45 p.m.
Walked down State Street, crossed the bridge over the Chicago River, and turned left on Wacker Drive. Arrived at Bella Bacino’s, one of our favorite restaurants ever. Their specialty? STUFFED PIZZA. Yum.

7:00 p.m.
Got seated at Bella Bacino’s, ordered more drinks. Ordered pizza right away too, because stuffed pizza takes 30-35 minutes to cook and we had an off-the-hook evening planned. 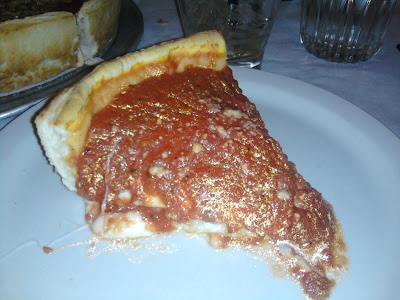 7:45 p.m.
Agonized over whether we should ask the server to box up the two slices of pizza that remained on the plate. Our plan for Saturday was to check out right after breakfast and have the hotel store our bag so we wouldn’t have to schlep it around the city with us. Wondered: would the pizza be okay, unrefrigerated, for about six hours?

7:55 p.m.
Decided that there are much bigger problems in the world that we could worry about instead, and went for the boxes, figuring we could always throw the pizza away later if we needed to. Headed out to walk to the bar at the House of Blues. 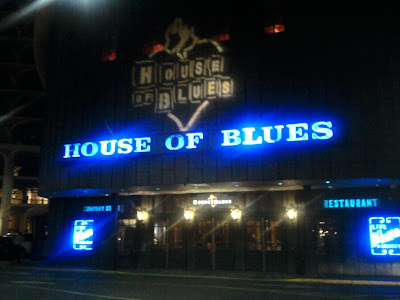 8:10 p.m.
Arrived at House of Blues and stopped at the gift shop to get a HOB guitar t-shirt for J. His old HOB shirt is way too small for him now, but he loves it so much that he wears it anyway.

8:15 p.m.
Went to the bar. It was sooooo crowded. Looked at each other, shrugged, and walked out. No worries, though: we had a Plan B. The party could start right next door at the Crimson Lounge.

8:35 p.m.
Walked right into the Crimson Lounge and found what looked like a cozy area in which to order some drinks and chill out together for a while. The club music was pounding–which I loved, and Jim hated. He may or may not have been looking for a DJ, so he could request some AC/DC. Ordered drinks. Talked about the velvet patterned wallpaper and how my Grandma had that in her house. 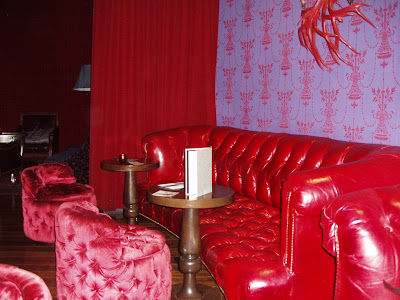 8:45 p.m.
Tried to sit back and get comfy on the couch, but frankly, it was not made for sitting on comfortably. Worked on sipping drinks. 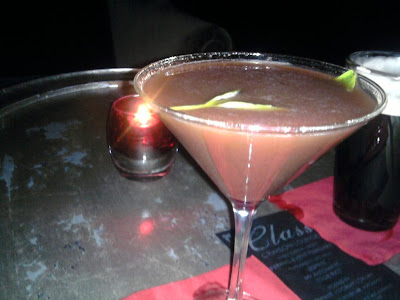 8:50 p.m.
Moved to another area that had a different couch. Every single couch in the place had a straight back. My theory? They don’t want their customers sitting around. They want their customers dancing. Unfortunately with the lack of Zumba music being played, the total absence of the “Cha Cha Slide”, and a husband who hates to dance, that was not within the realm of possibilities for us.

8:55 p.m.
Ignored my theory and continued to try and chillax on the new couch. Comfy or not, we were getting sleepy. We looked at each other and shake our heads. “Ready to go?” Jim said. *sigh* “Yes,” I replied.

9:00 p.m.
Walked back to hotel. Climbed into bed to watch some Headline News.

9:45 p.m.
Talked about how pitiful we are. Decided we can’t bring it, where partying is concerned, and our talents lie elsewhere. Sigh.

(It was still fun though, you know?)

Previous post: Here’s A Story About The Year I Gave Up The Wrong Thing For Lent