BlogHer ’11: The Year Of Fewer Parties and No Blisters

A couple of days ago, the arrival of the first invitation for an event happening the week of BlogHer ’11 (San Diego!) in AUGUST, five months from now, started excited heart palpitations (and in some cases, anxiety) among many bloggers. My good friend and BlogHer ’11 roomie Momo Fali wrote an excellent post today about her thoughts regarding events at this–or any–conference, and it made me want to share my thoughts and experiences, too.

But first, go read Momo’s post, not only because it’s fabulous, but also because she explains how conference sponsorship for brands happens to work. I’ll still be here when you get back.

Done? Great. Here’s what I have to say.

My first BlogHer conference was in Chicago in 2009. I was really excited that it was taking place in my hometown for many reasons. I didn’t realize that brands actually had so much to do with conferences, because I was a total newbie. At the time I purchased my ticket, I didn’t know anything about connecting with brands, or if I even wanted to do that. I did not have a “Reviews and Stuff” blog at that time, because it wasn’t really anything that crossed my mind.

I didn’t pay much attention to pre-conference chatter about parties and such, because I was just thrilled that I was going to be meeting some of my blog friends in person. I had signed up for the on-site evening events, because that’s what everyone suggested I do. With the exception of a last-minute invitation to a high-profile, off-site party for my roomie Sue and I, I didn’t leave the hotel for any events that weekend, just attending the ones I signed up for in the first place. (By the way, I was such a newbie that I didn’t even know about the suites upstairs that Momo wrote about, so I definitely didn’t go home with any cool pairs of jeans. Just sayin’.)

All of the parties that year were really fun. Though I appreciated the efforts of the sponsors and others who worked hard to create great events, I enjoyed myself mainly because of the people I was with. I could’ve been with the same people in a dark, damp basement with no music playing, and I STILL would’ve had a great time. (That said, I do prefer temperature-controlled rooms that have a soundtrack.)

To be completely honest, I don’t remember the parties at BlogHer ’09, and not because of anything having to do with alcohol consumption. My favorite memories of BlogHer ’09 involved spending time with my friends. 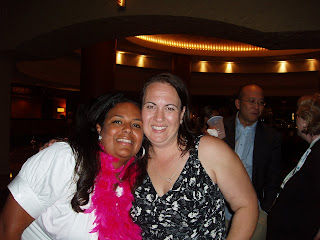 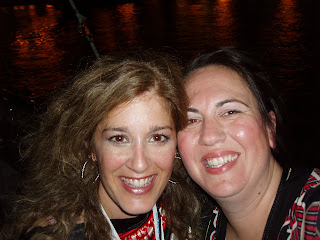 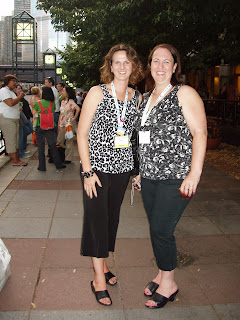 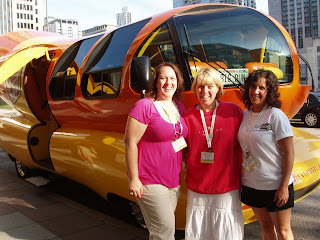 With Sue and Weaselmomma 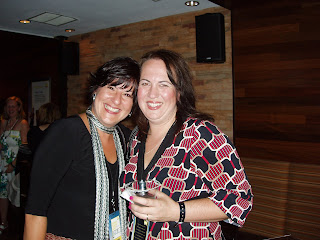 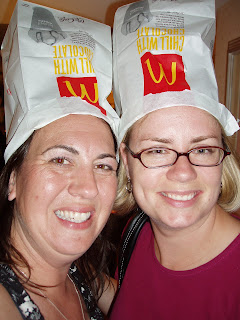 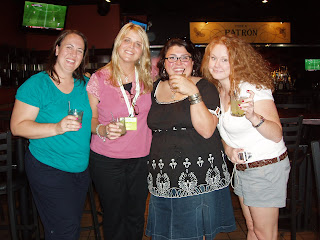 Oh my gosh. EPIC. With Momo, Mishi, and Piper
After BlogHer ’09, I decided to make a concerted effort to connect with some brands that were a good fit for me. I started my review blog, and have, in the past eighteen months or so, built some brand relationships that I cherish very much. I have also been sharing news and information about all kinds of Chicago-area activities, events, and causes, and I hope to expand that even more in the future.

When it was time for BlogHer ’10 (in New York City!), I received all kinds of invitations to “exclusive” events, and they were all off-site, due to BlogHer’s newly instated policy on only allowing conference sponsors to hold events at the hotel. I was thrilled to be included and decided to try and fit as much as possible into my schedule. On one evening, I actually had four events–

Momo and I walked to the first event together. It was a much longer walk than we had originally anticipated, and it was HOT outside. We were sweating, and my feet were killing me already due to a poor shoe choice.

By the time we got to that event, I had thirty minutes before I figured I had to leave in order to make it to event number two. Event number two was a HUGE party thrown by, let’s just say, a very high profile person and her company. I didn’t want to miss a minute.

As it turned out, I was going to miss lots of minutes because I was having a terrible time catching a cab (rush hour, you know), and the subway platform was so crowded that I had to watch two jam-packed trains leave without me before I could step into one. The nearest subway stop to event number two was still a cab ride away, and with no empty cabs to be found, I was hoofing it. In the shoes I chose badly. With blisters forming. By the time I arrived at event number two, not only was I forty-five minutes late, but they were only letting a certain number of guests upstairs at a time, and I was in the lobby for another thirty minutes. The party, which I thought would be the best one, stunk. (For me, anyway.) It was overcrowded and difficult to navigate. It was impossible to have a conversation with anybody from the company OR the one person I knew who was there, because of the volume and the amount of guests.

I stayed for about thirty minutes and hopped in a cab to go back to the hotel to drop off the fifty pound gift bags they generously gave party guests, and then grabbed another cab to head to Times Square for event number three, where most of my friends had been for a while, as evidenced by their texts: “Where ARE you?” “Are you coming??”

I was at event number three only for about forty-five minutes (and, I must add, had missed all but three of my friends!), because when I arrived it was forty-five minutes from being over. I took the subway back to the hotel for the final event, and then went to bed, exhausted and emotionally spent.

That was ONE NIGHT, people.

I looked on my computer to see if I could find the Excel spreadsheet I made with my schedule so I could show you the madness, but I apparently deleted it. In all, I estimate that over the course of the conference in New York City (three and a half days), I attended twelve parties and events, but possibly more. (By the way, that’s in addition to attending the conference sessions daily as well as the Expo!)

BULLETIN: As luck would have it, I took a picture of my schedule. Here you go; the purple boxes indicate events. 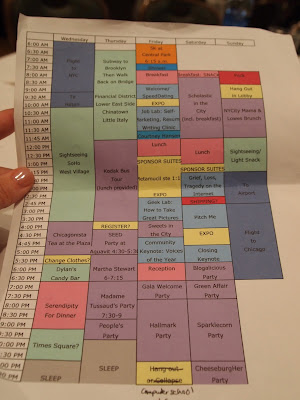 To commit myself to so many things was beyond stressful, and prohibited full enjoyment of any of the experiences. In the time I allowed myself at each event, I couldn’t effectively connect with anyone. For the most part, the best connections I made, brand-wise, were at the Expo and in the suites (run by conference sponsors!) upstairs in the hotel, not at parties I attended for half an hour (give or take) each. (There were a couple of exceptions, and those were Hallmark and Scholastic, who put on beautifully calm events that enhanced the ability to converse and exchange information. And the Brunch at the Lowes Hotel on Sunday? Was a FANTASTIC event–thanks, Carol!–and a great way to end such a busy weekend!)

An added note about that party schedule? My blisters grew by the day. My feet were a hot mess.

Do I even remember much about many of those big events at BlogHer ’10? Those exceptions, YES. But otherwise? Nope, other than how annoyed, sweaty, and upset I was. What I remember MOST about BlogHer ’10 is, once again, the fun I had with my friends:

~Like the time when Momo was so sweaty, she could walk around lower Manhattan with a napkin stuck to her forehead.

~Like the time when Michelle, Sue and I found a place that sold mini cupcakes and each chose one (in theory so we could share), and Sue popped hers into her mouth without any kind of hesitation, much to my and Michelle’s dismay.

~Like the time when Momo, Michelle, Colleen, Kelly, Sue and I took the subway to Brooklyn so we could walk back to Manhattan on the Brooklyn Bridge.

~Like the time I spent walking around Madame Tussaud’s with Liz and Patty as they made goofy poses with the wax figurines (I may have done this as well.)

~Like the time I ran my first 5K, with Michelle (best training partner ever!), both of us wearing matching pink shirts that we asked people to autograph, along with tutus.

~Like the time my roomies and I stayed up late, organizing our swag and our luggage contents. So. Much. Fun.

~Like the time Sue and I spent walking around the green market at Union Square, taking pictures.

~Like the time I went with a group of girls to the Carnegie Deli and sat next to Melissa, which was the best spot in which to have conversations about how thrilled we were that we were eating the food of “our people”. (Seriously. Corned beef sandwiches and potato pancakes? WOW.)

~Last but not least, the party in Room L, late Saturday night. We set up on a couple of lobby benches and our crowd grew as time went on, all of us talking, laughing, and sometimes wearing clown noses.

THOSE are the kinds of experiences that make a conference fun. This year, I plan to plan my schedule very, very carefully. I hope to have some chunks of empty time in which I can just “let the magic happen”. I will be carefully considering the invitations I get and will ask myself lots of questions before accepting, especially this one:

Do I have (or do I want) an existing relationship with this company or organization?

If the answer is no, my decision regarding event attendance is easy. I think it’s a strategy that will work for me, because it will leave me more down time, more time with my friends, and more time on the beach. How can I go wrong?

Tagged as: NYC, Will Someone Please Slow Down the Crazy Train