The Blizzard of 2011 Was An Overachiever, Just Like Someone Else I Know (And NO, I’m Not Talking About ME.).

In fact, though my friends in the northeast have referred to their overabundance of snow this winter as “Snowmageddon” and other such intimidating names, many of us in Chicago have referred to our blizzard as Snowprah.

I love it. I mean seriously, Oprah has had a 25th Farewell Season that yielded way more than even she ever expected, like the half-sister she never knew about, and–OF COURSE–having my own sister and me as a part of her audience. Having an actual blizzard named after her? Oh my, I’m sure she never imagined that would ever happen.

The media coverage of this storm (and the nearly giddy demeanor of the local meteorologists as they drooled all over themselves while spouting out predictions from their fancy weather computers) threw even the cynics into a mini-panic. Most school districts around here made their decision to cancel school on Wednesday by early afternoon on Tuesday. People were filling their gas tanks, stocking up on supplies at the grocery store, and getting the flashlights out of storage. My friend @thenextmartha, who lives in my town, even vlogged about stocking up on Storm Meat; if you haven’t seen it, please go and look by clicking here. It’s one of my most favorite vlogs she’s done. (and yes, she’s that entertaining in person.)

My boss even preemptively closed the salon for Wednesday, before the snow started falling. All sources indicated that this was going to be one of the biggest storms in the history of all things, here in the Chicago area.

We were busily warming up our shoveling muscles around here, and then Jim sprained his wrist. Oy. That meant that we had one less manly-man to help get rid of the snow that was going to get dumped on us.

We had one other worry here at home: D had come home for a five-day break in between his four-week January term and Spring semester, and during that time, his radiator broke. Better here in the driveway than at (or on the way to) school, but it also meant that we had to get him back to school. He could have ridden the train if this was a normal, two-day weekend, but he brought home more stuff than usual and it was too much for him to handle without a car. I decided to take him back, and had to do so early on Tuesday morning so I wouldn’t get stuck in Wisconsin by Snowprah. We left home just before 5:00 a.m. and I made it back at 8:30 a.m., which was a great time. Then I had to go to work.

It started snowing heavily in the early afternoon. I was at work, and everybody was hustling, trying to get out of there early. By the time I left at 4:00, the roads (and traffic) were awful. The drive home, which normally takes me about fifteen minutes, took an hour. It wasn’t bad, though: I expected it to be twice as long of a commute.

I spent the evening tweeting and paying attention to all of my friends here in the Chicago area and the rest of the Midwest, and it was pretty ugly all around. People were losing power, losing cable, losing internet, losing their minds…it was crazy.

On Wednesday morning, Jim and I got up at 7:30 to assess the damage. I have never seen anything like it. We turned on the news and heard about how, after an accident on Lake Shore Drive in the city brought traffic to a halt during the blizzard, the wind and snow stranded around 900 cars. (Here’s a picture of that. WOW.)

After watching the extensive news coverage for a bit, I woke J up and told him to look out the window, saying “Hey, look at it this way, if we start shoveling now, we may be done by lunchtime!”

Naturally he wasn’t buying my Pollyanna act and tried to hide under the covers, but he eventually got up and we got ourselves bundled up and ready to face the snow:

It is truly one of the great things about having teenagers: they are fabulous at helping with the shoveling after a winter storm. For the next two hours, J and I dealt with this: 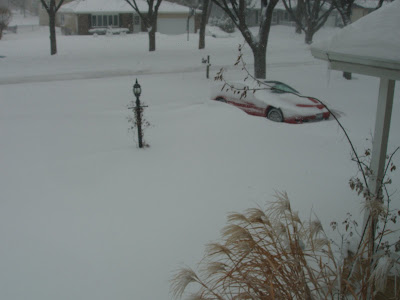 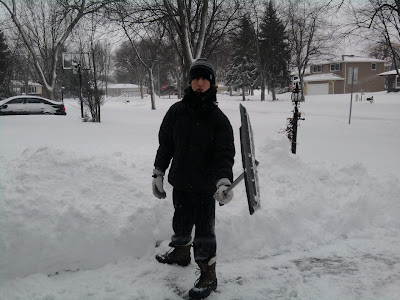 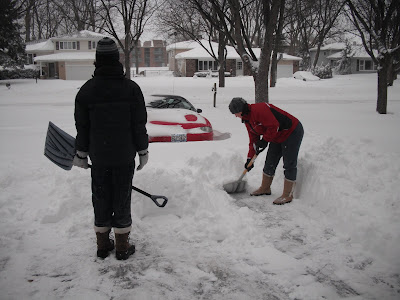 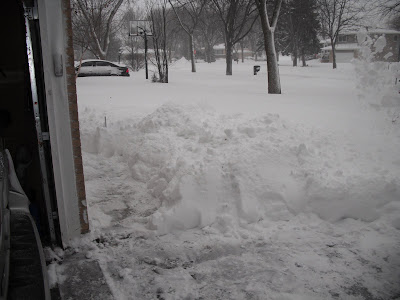 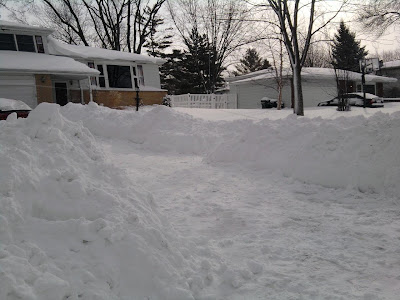 We had a pretty good time, even when you consider how many pounds of snow we moved without the benefit of a snowblower. Jim brought us cocoa and turned on the radio in the garage. We even had a really lame snowball fight: I was lamenting that the snow “wasn’t even packable” (which is actually a good thing, because had it been packable, it would’ve been much heavier). J asked me what makes snow packable and I replied, “Moisture.” He grabbed some snow and tried to pack it together into a snowball and said, “So if I throw this at you, it’ll probably fall apart before it gets to you?”

“Yep,” I said, “But try it.” I turned around so he would be aiming at my back, and he threw it over. It felt like it barely brushed my jacket and I turned to him and said, “Well, that was fun. Let’s keep shoveling!” And we did.

After we finished the driveway, we cleared a path on the sidewalks. We were so happy to be finished that J gave me a Captain Morgan. 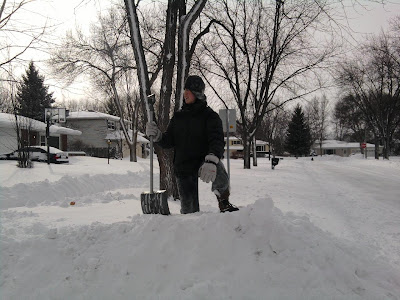 A couple of hours later, Roxie was begging to go outside. Her ears were perky and she was barking at me; clearly the dog didn’t need to relieve herself as much as she wanted to go outside for a walk. Well, walking was out of the question, considering the fact that many of my neighbors hadn’t even ventured outside yet, to take care of their snow. I said to J, “Hey wanna go out in the backyard with me and run Roxie around?”

It is truly one of the bad things about having teenagers: they won’t go outside with you to help give your dog some exercise after a winter storm. So I did it myself. Of course, once Roxie sunk into the deep snow for the first time, she went all “teenager” on me and wanted to go back inside immediately. I ended up asking J to get me some dog treats, and it all worked out from there.

Cute, huh? Guess what? I have posted another video (a short one) on the Suburban Scrawl Facebook page. Go check it out, and while you’re there, please consider “liking” the page if you haven’t done that already! Roxie and I thank you. 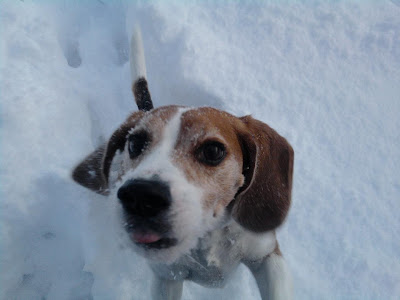 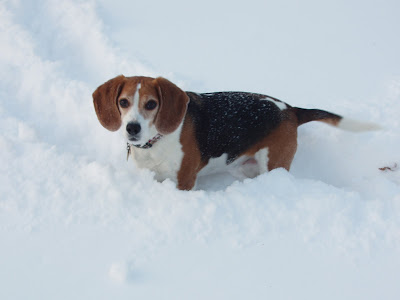 All in all, a great snow day for all of us. Thanks, Snowprah!