One of my all-time favorite activities is traveling. Back in high school, a friend and I talked about becoming travel agents someday. We subscribed to a couple of travel magazines, occasionally stopped in at the travel agency for brochures, and clipped articles and ads for places we’d like to visit someday. Putting together our little notebooks full of exotic vacations was thrilling, and since actual money wasn’t involved, the sky was the limit. Having the freedom to go wherever we wanted was an exciting thought.

Some people would be terrified of experiencing new cultures and new languages; my heart beats faster at just the thought of it. Unfortunately for me, real life gets in the way of my travel dreams and I don’t go very far (with a few exceptions, of course! Munich…sigh. Bahamas…sigh. New York…sigh.). If it were up to me and if our budget allowed it, Jim and the boys and I would travel to an exciting destination a few times a year. Maybe someday, but for now, we “travel” on the couch.

That’s why today is a grand day in the Wells house. We can barely contain our excitement over tonight’s premiere of “The Amazing Race”, Season 18, which carries the subtitle “Unfinished Business”. All eleven teams have been on the show before, you see, and they all either made an error along the way or got really close to winning–but didn’t–and were invited back for a second chance. We are SO PSYCHED. Personally, the premiere is great timing because I have just finished reading host Phil Keoghan’s book, “No Opportunity Wasted: Creating a List For Life” (any book that advocates list-making gets two thumbs-up from me!), which was both inspirational and thought-provoking when it comes to things like fear and why we hold ourselves back from stepping out of our comfort zone. (And, by the way, yay me for finishing book number three for the year so far!)

I’ve written about this show a couple of times*: it’s one of our absolute favorites. We don’t answer the phone when it’s on, we don’t tweet when it’s on, we don’t text our friends when it’s on, and we don’t read when it’s on. (We do, however, eat dinner in the family room when it’s on.) This is one of the few shows out there today that is educational, family-friendly, AND entertaining. We have been known to jump up from the couch, cheering–or screaming in protest, depending on the situation. Watching teams of two race around the world, completing challenges along the way, to try and win a million dollars, can get pretty heated, emotionally.

We have rituals: on premiere night, we always, individually, pick a team that we think will win, and, since first impressions don’t always tell you what you need to know, we pick a second choice team, too. We also have special dinners on premiere nights, like the time we made international mini burgers, served them on airplane tray-style plates, and wore “Amazing Race” wing pins, which I made myself. (This time? It’s appetizer night. Only apps for dinner. That’s it. I’ll probably serve them on those airplane tray plates, though!)

If you haven’t watched “The Amazing Race” (ahem, Michelle…), I (obviously) highly recommend it. The challenges are sometimes scary, sometimes ridiculous, sometimes creepy, and almost always entertaining. Take the cheese task, for example. A couple of seasons ago, teams had to transport fifty-pound wheels of cheese (four per team) to the bottom of a very, very steep hill in Switzerland. Naturally, hilarity ensued, and I’m not only talking about the Swiss men who were standing at the bottom of the hill, drinking beer and laughing their butts off:

Several of the teams from that season will be on Season 18, by the way.

Last season, the Race made news because of the challenge in which one of the contestants hit herself in the face with a small watermelon. OUCH!

I think our family’s all-time favorite moment was this one, when a contestant was absolutely freaking out about going down a water slide to finish a challenge and check in at the end of the race leg. Her boyfriend was doing all he could to get her down that slide, but she wasn’t having it. (It just goes to show you that, even for a chance at a million dollars, not everybody can stuff their fears.) Flight Time and Big Easy, two Harlem Globetrotters players who made up another team on the Race, showed up and, well, you’ll just have to watch it. Though the “stuck” team wasn’t happy with their behavior, my family found them hilarious: it IS a race for a million bucks after all! We LOVE Flight Time and Big Easy: they’re coming back for Season 18!

Also back for this season? Kent and Vyxsin, a pair of goth punkers who were so much fun to watch. They are one of my favorite teams ever. 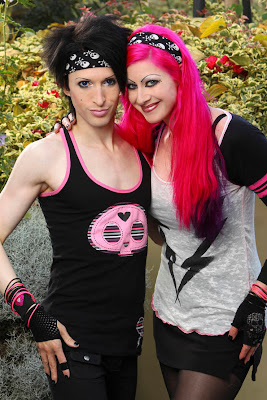 *By the way, if you missed them, Momo and I wrote companion posts to commemorate the last episode of Season 17. Click here for mine, and click here for Momo’s. They’re the next best thing to us actually participating for real.
**Also, though it may seem like it, I was not asked to write about the premiere. I’m just a huge fan, wanting to share the fun with YOU.

Tagged as: Current TV Obsessions, Fanatics In The Best Sense of the Word

Next post: Sometimes Your Talent Shows Itself Without Prompting.

Previous post: On Having A Brain That Won’t Turn Off