Sometimes Your Talent Shows Itself Without Prompting.

My boys differ greatly when it comes to lots of things; their affection for children is one of them. D has always been really great with small children: he isn’t intimidated by babies, and toddlers adore him. He babysat often in high school and his young charges thought he was the best thing ever. The five to six-year-old group idolized him completely. I believe that his being the perfect age–starting at three and a half!–to help out with the babies and toddlers in the health club nursery where I worked (and brought both boys along) for several years was partially responsible for instilling something within his personality to have these kid-friendly qualities.

J, on the other hand, was a babe himself when I first got that nursery job: he was eight months old, and one of the babies his brother helped me and the other staff to care for. By the time he was four, I wasn’t working in the nursery often anymore. He has never had the desire to babysit, even in a group: our temple sometimes has a need for a group of teenagers to take care of the little guys during events. He’s not interested. Younger kids annoy him, and I think in some ways they make him nervous!

Let those kids grow up by a couple of years, however, and he does magical work with them.

Both boys have been my teacher aids in my second grade religious school class. At our temple, religious school on Sundays has two sessions: currently the earlier session is for Pre-K through 4th grade, and the later session is for 5th through 10th grade. (The year that D was in 5th grade there were two classes: one–his class–met during first session and the other met during second session.) When D began 6th grade, he became my teacher’s aid in the morning (J was still in class). When J hit 6th grade, he became my aid and D moved across the hall to help my co-teacher in the other second grade class for a couple of years.

J is in tenth grade now, and still helping me out on Sundays. He does normal teacher aid stuff, like making copies, gathering craft supplies, accompanying kids to the restroom, and lots of other things I couldn’t begin to list here, but my favorite contribution from him is the help with Hebrew.

I don’t read Hebrew, and I never became a Bat Mitzvah when I was thirteen. It’s never too late to learn, I guess: this is my fourteenth year of teaching second grade religious school, and over the years I have become more and more familiar with the letters. (One of the items in the second grade curriculum is to start getting the kids familiar with the Hebrew letters, in preparation for 3rd grade when their Hebrew studies begin in earnest. Our job is to dip their toes in the water, getting them to try out the sounds and to try and be comfortable with the way they look.) Actually, when I’m attending Shabbat services on Friday nights or Saturday mornings, I can often follow (choppily) along in our prayerbook when someone is reading Hebrew, because I’ve taught the sounds of the letters for so long. I’m still not totally comfortable, though.

J is. In the past couple of years, he has supplemented my Hebrew lessons with great class reviews of the letters. He makes it fun for the class, using a yardstick to point out each letter on the chalkboard, asking the class to shout out the letters and, when they get too crazy, he tells them to “make the sound of Alef!” (The letter Alef is silent.) He goes into speed rounds, round-the-world quiz games, and just general goofiness. They are LEARNING it. They are RETAINING the information. He gets their attention and keeps it. His classroom management skills are bizarrely good, for a young guy his age. Some of my proudest moments have been watching him in front of my classroom.

As a high school sophomore, he’s been thinking a lot about what he wants to do, career-wise. Jim and I have had many discussions with him to try and help him figure it out. He’s spent the last two years in a toss-up between Culinary Arts (he loves to cook!) and Music (he loves his guitar: and is very talented, too!). It’s been in the last six or nine months that he has added “Music TEACHER” to his list of possibilities. I love the idea of combining his love for music with his innate talent for commanding a classroom.

No matter what he ends up doing, I’m behind him. What I want for both of my kids is for them to have fulfilling careers in industries they love.

And though I won’t push J towards teaching if it’s not what he wants to do in the end, I do hope he recognizes that he has a natural talent for it, and uses that knowledge when making his decision. 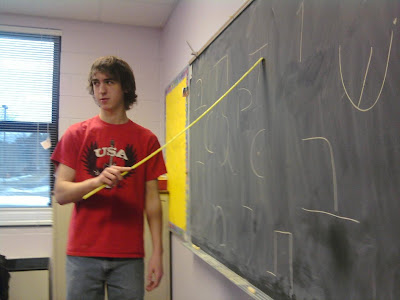 Next post: Taking "Obsessive" To A Whole New Level.