Normally I would put a post such as the one I’m about to share over at my review blog, but this experience was never meant to be a review. I wasn’t asked to participate in what you’re about to read and I did indeed pay for it with my own money. I wanted to share it here because it’s something truly fabulous that I experienced personally in the city of Chicago. It’s my duty to share it with you here!

Over the last five years as I’ve been working on my book, I’ve done lots and lots of research about things to see and do in Chicago. Some of those things are well-known by everybody (the Museum of Science and Industry or Millennium Park, for example). Some? Not so much.

Though my friends who work in the Loop have laughed at me, a Chicago native, for not knowing about this, I just discovered, while doing my research, that Chicago has a Pedway system. The Pedway system is a bunch of tunnels, concourses, and overhead bridges, all enclosed, that pedestrians can use to get from building to building in inclement weather. All along the way are businesses and offices.

I mean, a city underground: how cool is that??

I connected early on via Twitter and Facebook with Margaret of Chicago Elevated. Margaret, who has an improv comedy background as well as extensive training in the Docent program at the Chicago Architecture Foundation, founded Chicago Elevated a couple of years ago and gives tours of the Chicago Pedway in the winter months, as well as tours of Boys Town in warm weather. (I am going to be dragging my sister to the Boys Town tour when the sun finally comes out.) I was thrilled to finally be able to set the date for my Pedway tour, and so excited to finally meet Margaret.

Yesterday I drove into the city (or, as Jim refers to it when it has to do with an activity I’m attending, “Happytown”), parked in the Millennium Park garage, and scurried on foot to the starting point of the Chicago Elevated Pedway tour, 40 E. Lake Street (right around the corner from the Chicago Theater and the ABC7 studio). Meeting Margaret was like meeting an old friend: hugs, big smiles, and instant warmth. There were two others going on the tour with us, and after quick introductions Margaret started the tour by telling us a little bit about what to expect as we walked through the various corridors of the Pedway, including sights and smells. (By the way, the Wednesday tour is the “locals/commuters” tour. It’s an hour long and is more utilitarian than the original tour, which is ninety minutes long and given on Tuesdays and Thursdays.)

I would never give you a play-by-play of the tour here, because really, if you’re local you should just contact Margaret and arrange for her to give you a tour so you can experience it for yourself. What I will say is that, even being a Chicago native, even after extensive Chicago research for my book, I learned SO MUCH in that hour yesterday. Margaret was funny, informative, smart, easy-going, and had answers to every question. It made me feel even prouder to be a Chicagoan, something you probably can’t imagine would be possible if you know me.

Margaret, who has spent hours and hours (days? months?) exploring the Pedway, told us that she has found every kind of business imaginable down there (stores, bars, restaurants, public transportation–there’s a Metra train station in there!–post office, Department of Motor Vehicles, Marriage Court…) EXCEPT for a religious institution. Amazing!

In the Thompson Center Pedway connection: 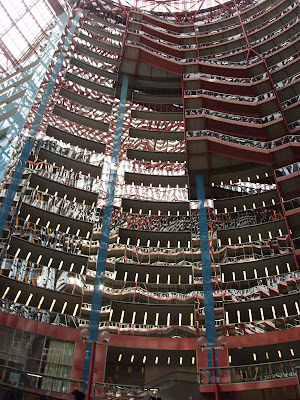 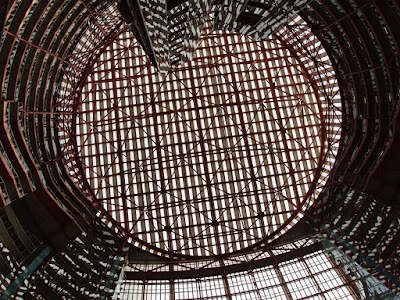 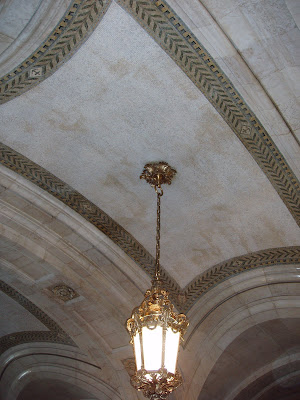 The ceiling mosaics feature the “Chicago Y” (click here to learn about that!) 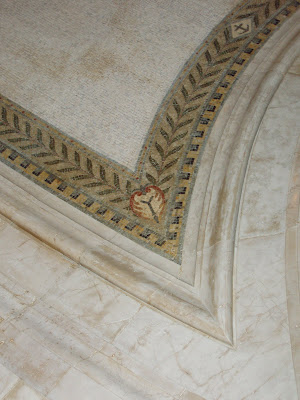 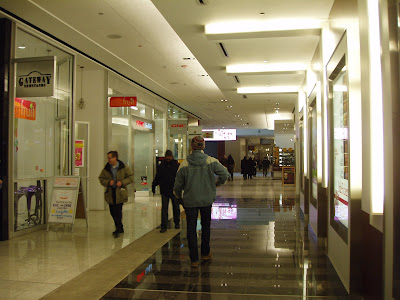 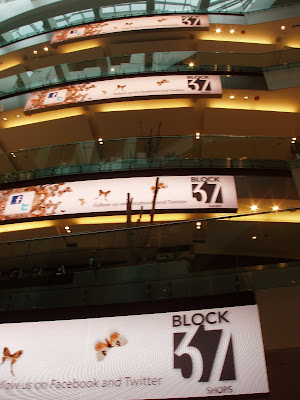 Even Macy’s Marshall Field (sorry, I still can’t make the transition) on State has Pedway access! 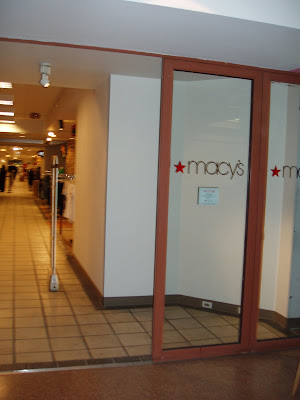 Need to catch a train? 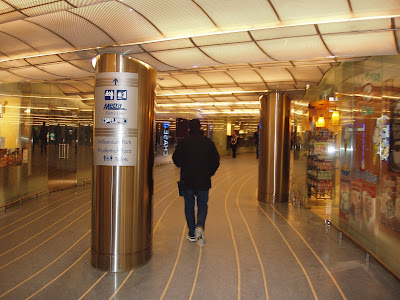 I found the Pedway to be a fascinating place, more vibrant–and cleaner–than I expected. The hustle-bustle of it all was thrilling to experience. As we walked, I kept trying to orient myself, thinking, “Okay, WHICH building are we walking under, right now? Which street is this???” Margaret warned that the disjointed nature of the Pedway makes it hard to understand, something I totally got. I was completely disoriented, but plan to return in the future so I can put some time into figuring it out.

At the end of the hour, we got into an elevator and went up to the thirty-somethingth floor (I don’t even know!) of a hotel. Stepping out of the elevator, we were treated to one of the most hauntingly breathtaking views of Navy Pier I have ever seen. 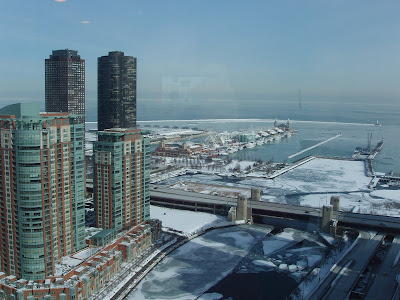 I appreciated the dramatic ending to our tour so much.

Margaret, thanks so much for a memorable afternoon! I’m looking forward to a lunch date and, of course, the Boys Town tour this summer!

If you are interested in learning more about Margaret and Chicago Elevated, click here. And if you decide to go on a tour? Let me know: I might join you!