The Chicago Wolves Provide Fun For All Ages!

Watching hockey is, for me, a lot like watching lacrosse, which is what my sons play. It’s a fast-paced, thrilling game of skill and strategy. I have a strong “first memory” of hockey: I was glued to my television during the 1980 Lake Placid Olympics, when the U.S. Men’s hockey team defeated the Soviet team and then went on to win the gold in the final game against Finland. (In fact, our family watches that often, in the form of the 2004 Kurt Russell movie, “Miracle”. I highly recommend it if you haven’t seen it!)

Believe it or not, I have never, ever actually attended a hockey game, live and in person. That’s why I was thrilled to get an invitation to bring my family to a Chicago Wolves hockey game that took place last week, against the Hamilton Bulldogs.

Before the game, we stopped in at the Family Fun Fest (which happens before every Saturday game), which took place from 5-6:30. Admission is free with a game ticket, and there’s all kinds of cool activities going on there, accompanied by awesome music from a DJ. You can get your face painted, create a poster for the game, take shots on goal, hang out with Skates (the mascot), and even try on some gear.

Once we headed into Allstate Arena to find our seats, we were sufficiently pumped up, but took cues from the big screen hanging over the ice to get loud (not a problem for me): 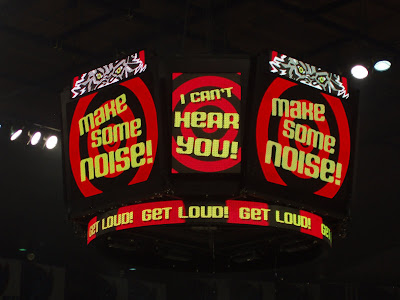 While we were sitting there, getting loud and absorbing all that was going on around us in the packed house, we were reading our program and watching the teams warm up. I had never heard of the Hamilton Bulldogs before, and was told by my husband (who isn’t an active sports fan but always has fun facts ready to go) that they are Canadian. (Am I the only one who didn’t know that?) 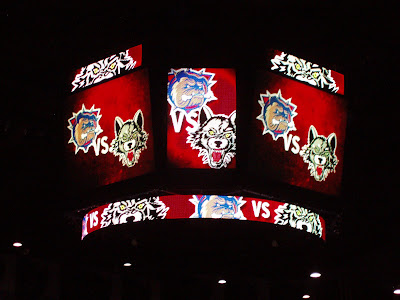 We, the audience, were not only asked to “Get Loud”, but we were also warned to be on the alert: 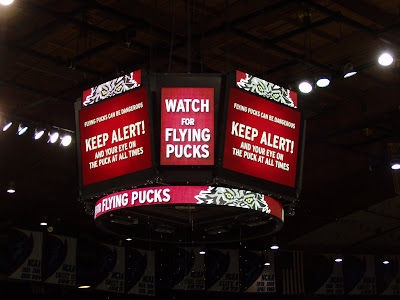 I know how hard a lacrosse ball is, so I could only imagine how much a flying puck could potentially ruin our day. We resolved to “watch out”, as warned!

Soon, it was time for the team to have their grand entrance. We were treated to an amazing fireworks show, which admittedly had me a little freaked out because there is a ROOF on the Allstate Arena, folks! And here we were, watching a fireworks show, inside! Eeek!

Of course, we survived. They’ve got pyrotechnic experts in charge, no doubt. Check out what we saw:

The game was every bit as exciting as I thought it would be, though I thought there would be more fighting. (There were 1 1/2 fights.) I can definitely see myself returning with my family, especially because the Wolves lost that particular game and I’d like to see them win! 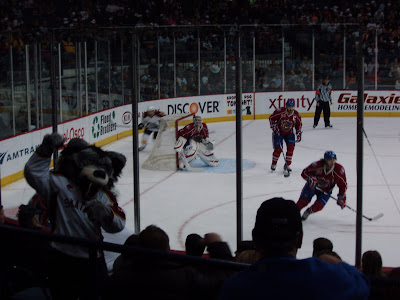 The next time we visit, we will definitely take advantage of the Chicago Wolves Fan 4-Packs, which start at $63 and include FOUR tickets, FOUR hot dogs, and FOUR drinks. That is a ridiculously good deal, and kudos to the Wolves for making it affordable to bring the whole family for an evening of excitement. It costs only a couple of dollars more than a night out at the movies, really!

Thanks so much to the Wolves, for hosting my family: we appreciate it!

Disclosure: My family was provided with complimentary tickets to the game, with no expectations of my writing anything specific in a blog post. All words and opinions are mine.

Next post: I Take the "Super" Out of "Superhuman".

Previous post: And This Is Why He’ll Probably Never Work For The FBI.