Ready For My Closeup…Sort Of. (Part 2)

Did you read Part 1 yet? You should, before moving on. Click here to read it.

When I woke up at 2:30 a.m. I was completely annoyed. Naturally my thoughts went to the photo shoot, and then to other “work” related items. I tried my best to think about things like puffy white clouds and wide open meadows, to no avail. I was wide awake. I made myself stay in bed until about 4:40, and that’s when I got up and started getting myself ready. The hair, though it took a really long time, turned out really well! I followed Lynn’s (my hair stylist) directions and was beyond pleased, even though it would’ve looked nicer if she had done it…but I worked with what little skill I have and did just fine.

Instead of wearing my winter coat, I grabbed my spring-weight* black leather jacket, because I thought it looked nice with my coral top, turquoise necklace, black pants, and black boots. I even remembered lipstick, so yay for me**!

I picked up Julesie at just a couple of minutes past six and we headed in to the city. Traffic was a breeze, and we grabbed ourselves a parking spot on Kinzie, right across State Street from Marina City, for only three bucks. THAT? Is awesome. The only reason we got such a primo parking spot was because we got there early enough; had we waited a little longer, I would’ve had to pay about fourteen dollars for one hour in a parking garage.

We walked away from my car and I was instantly reminded that it’s winter. It was about twenty degrees outside, and windy. I wasn’t wearing a hat (the HAIR, you know!), and I accidentally left my gloves in the car (oops). The photo shoot was fun, but it was hard to keep my shoulders from rising up towards my ears because of the frigid temperatures. My kids will be happy to know that I consider this photo shoot to be the payback I was owed from this one: 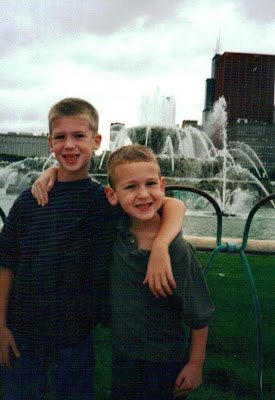 The year? 2000. Jim and I took the boys to the city to take our holiday card photo in front of Buckingham Fountain. It was an abnormally cold day in late fall, and when we arrived at the fountain, which is in Grant Park, I took off their coats*** and sent them over to start posing.

“It’s cold, Mom!” they yelled at me, their teeth all a-chatter.

That phrase has haunted me–with Jim’s help, of course–ever since. (You must admit, though, the picture is simply adorable! Right?)

So yesterday, at my own photo shoot, I did my best to act warm. Well, I did that whenever I wasn’t making statements about how I needed to “get some people” like Mariah Carey has, and that Julesie’s job would be much easier “if I had an Andre, like Oprah does”. She was not only scouting out good angles and locations, but she was hanging on to my purse and my hair and makeup bag (since most surfaces were covered with ice and snow and it wasn’t a good idea to put it all down), adjusting my hair (often: remember, it was windy!), aaaand finally, taking pictures–with two cameras: film***** AND digital.

Between the cold, the wind, my flyaway (but still ever-so-pretty) hair, my smiling issues, and my frozen toes, it’s amazing that we had as much fun as we did. Of course, things got a little goofy–just like they usually do when we’re working on a serious project–after a little while, and the Austin Powers quotes came out:

In the end, she got a bunch of fabulous pictures, and we’re working on figuring out which one will appear on the back of my book. I will also probably frame one for Jim. I’m pretty sure the last time I posed for a solo photo shoot (intentionally, with advance preparation) was in 1988, when I went to Glamour Shots, and ohmygosh, I just realized that I wore a black leather jacket in that picture, too. (and NO, I WON’T BE POSTING THAT PICTURE, even though it’s very cool.)

I was all set to post one of the outtakes for you when I started writing this post last night, but my sister told me there would be a delay because she was “doing something” to it before sending. It arrived, and it was worth the wait.

Ladies and gentleman, one of the outtakes, the “lemur picture” (objects in picture may appear larger than they actually are): 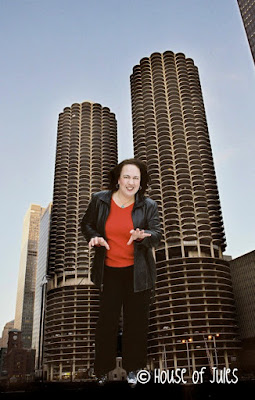 I won’t be using this one on the book cover, but it’s indeed spectacular, don’t you think?

Tagged as: Will Someone Please Slow Down the Crazy Train

Next post: The Blizzard of 2011 Was An Overachiever, Just Like Someone Else I Know (And NO, I’m Not Talking About ME.).