Phil Keoghan Would Totally Dig Us.

“The Amazing Race” is one of my favorite shows. My entire family loves to stop everything on Sunday evenings to watch. For those of you who aren’t familiar with the show, it’s a reality game show in which teams race around the world, completing tasks along the way, in hopes that they’ll be the first team to the finish line. On most legs of the race, the last team to arrive at the finish line (where host Phil Keoghan waits for them) gets eliminated. On the very last leg, the first team to arrive at the finish wins a million dollars.

Two years ago, we even had a theme dinner on the night of the premiere, during which we made several different types of “international burgers”, ate them on styrofoam airline-style trays, and wore custom “Amazing Race” wing pins (like little kids get from flight attendants), which I made. I know, it sounds insane, but it was fun.

A couple of Sunday evenings ago, shortly after we finished watching the newest episode of the current season (Season 17), I was on Twitter when this popped up in my mentions column:

Perfect. I jumped all over the opportunity to speculate with Momo for a minute on how fun it would be for us to run The Amazing Race together. I think I mentioned that she would definitely have to handle the icky food challenges, and then she said she’d do that as long as I took care of the height challenges. Hmm. I told her that I get shaky when I’m at the top of the ladder, but I think I could deal with heights better than eating goat brains. The teams on the show also nickname each other, and Momo and I established that we would have to be known as the Meat Maidens, in homage to this*.

Anyway, I thought that, rather than sit there and tweet a discussion back and forth–because really, WHO DOES THAT?**–maybe it would be fun for Momo and I to write companion posts about our imaginary participation on the show, in honor of the fact that this Sunday, the finale of Season 17 airs on CBS (not sponsored, just sayin’.). So here goes.

First of all, many teams in the last couple of seasons have been choosing a certain color or style to wear most of the time. Momo and I would definitely have these shirts, which we would buy from this place. 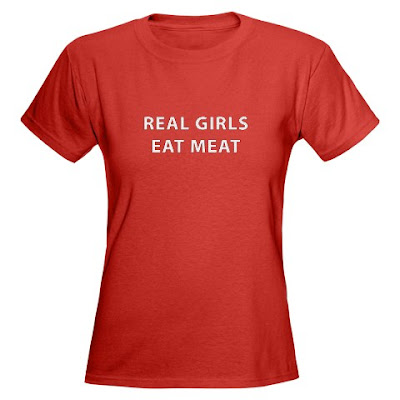 Cue our starting time for our random leg of the race, which begins in London. We get to our start and receive our clue at the exact time we’re supposed to begin, because as it turns out, I kept Momo up the night before, sneaking out and away from production to sit on the grounds outside of Clarence House, waiting for Prince William and Kate Middleton to leave.

By the time we got back to the hotel, it was late, and though she was well-rested from all of the Xanax and vodka cranberries she ingested on the flight the day before (not to mention the drink we had at the pub on the way back), I had to practically drag her out of bed in the morning.

Anyway, where was I? Oh yes, the start. Our clue told us that we had to drive ourselves to Heathrow, and get tickets to Glasgow, Scotland***, where we would find our next clue, in the airport parking lot. As we ran to our car, I ranted about the awful first experience I had at Heathrow, in which my connecting flight from Dresden, Germany was late and by the time I navigated customs, rechecked my luggage, and took the shuttle to the correct terminal, I had to run to my gate barefoot–because I had been wearing heeled sandals–and the plane nearly took off without me****.

“SHUT UP!” She screamed at me, “I’ve heard this story like, TEN TIMES!”

“It’s okay!” She exclaimed, her own eyes watering just a bit.

And then we hugged it out, because THAT is what makes a successful team dynamic on “The Amazing Race.”

We ended up on the same flight with everyone else at the airport (I hate when that happens), but we smoked them all when it was time to find the clue box.

After foolishly choosing the Detour which involved learning to play twenty seconds of a famous Scottish tune on the bagpipes (total fail), we rushed across town to complete the other Detour, which was for us to hit golf balls on the putting green until we got ten–each– in the eighteenth hole at the Glasgow Golf Club. I was really glad that Momo and I committed to do all of that weight training before the race, because this challenge was a killer workout for the arms. (Yes, even on the putting green. Shut up: this is my story.)

“Not as great as YOU!” I would respond.

Eventually we made it to our roadblock. The clue said, “Who likes to count sheep?”

Momo screamed, “ME! I was MADE for this challenge!” She took off ahead of me, and was completely devastated to find out that the challenge didn’t involve a nap at all; rather, in order to complete the task she had to eat a jumbo plateful of haggis.

If you could have seen the look on her face! 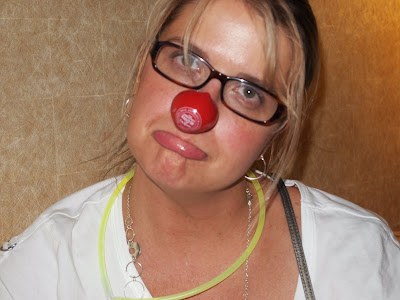 She snapped out of it immediately though, because two other teams showed up at that moment. She sniffed at the haggis, and then started eating it. It wasn’t fun for her, but she sure was a good sport about it. I shouted completely encouraging things, like “Pretend it tastes like chicken!” and “You are so LUCKY to be able to try authentic haggis, Momo! Not everyone gets to do that!” I think she might have glared at me for that one, but I let it roll off my back.

After chowing down like a pro, she finished the entire plate. I asked her if she wanted to throw up, and she said no. What a competitor! She got the next clue, I grabbed her hand, and we took off to find a taxi to take us to Phil at the finish.

Running through the park and over that huge hill, we saw Phil in the distance, standing with another person. (Phil is always standing with a representative of that country at the finish.) He was a glorious sight. Momo and I ran to him and then, looking behind us to make sure we weren’t in a foot race with any other team, switched from running to leaping, ballerina-style. We were giddy, and even more so when we saw who was with Phil…Craig Ferguson, thank you very much! (Shut up.)

Phil raised that adorable eyebrow of his like he always does and said, “Momo, Melisa…I have some news for you…YOU ARE TEAM NUMBER ONE!”

“Woooooo!” we screamed, jumping up and down, hugging each other. We rocked! This was the fifteenth win in a row! What kind of prize could we possibly win this time? We had already won vacations to Turks and Caicos, Tokyo, Iceland, Munich (had to throw that one in there), and Monte Carlo–as well as jet skis, VW Beetles (take that, Oprah), $5000 gift cards to Target, and maid service for a year…

Phil smiled. “You’re gonna like this one. As Team Number One you’ve won…”

And then we celebrated. 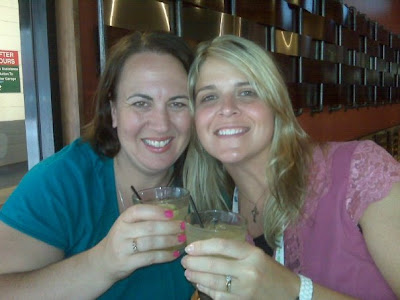 Visit Momo to get her take on our doing the race together. At least, that’s what I hope she wrote about.

*I know, I know: I said that the teams nickname EACH OTHER, not themselves. However, this is Fantasy Amazing Race, so I can do what I want.
**Haha! Get it? On Twitter, people…oh, never mind.
***If my beautiful Scottish friend Siobhan is reading, a personal message: Siobhan, I’ve never been to Scotland. Obviously.
****True story.

Next post: HomeGoods Should Be Called HomeGreats. That’s All.