I have, for the last three days so far, been working on getting my house organized in a major project I call my 12 Days of Productivity. The results have been phenomenal, and each day I am more excited to start (and finish! imagine that!) the next part of my plan; I can truly visualize my house looking the way I want it to look, even behind the cabinet and closet doors.

Yesterday’s assignment was to clean out the double cabinet over my kitchen desk. This is where I keep about half of my cookbooks, the phone book, my address book, notecards and stationery, and all kinds of other miscellaneous stuff. Over time, it became a catch-all for everything random, including old issues of Nailpro that contain my feature articles, school pictures, computer stuff, and all kinds of other miscellaneous stuff. Icky. 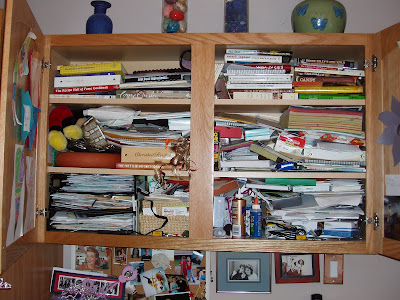 I was really looking forward to this part of my project in particular; out of all the things I have planned to organize over these twelve days, this is at the top of the list when it comes to how often I use the area. When I opened up the cabinet doors yesterday morning, I decided to work from the top shelf down, and started taking things out, stacking them on the kitchen island, and figuring out what to donate, toss, or keep.

All in all, it took me about two hours, and not only did I end up with a totally clean set of cabinets, but as an added bonus I found some interesting things, including a few surprises:

1. This book, “Love and Knishes: How to Cook Like a Jewish Mother”. 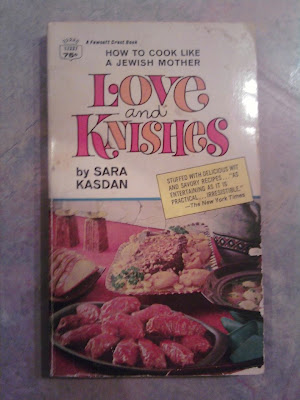 It was published in 1967 and either belonged to my mom or my grandmother. I have never, ever used it but will not get rid of it; I love stuff like this. Besides, it doesn’t really take up much space. It’s kitschy!

2. Jim’s camera battery charger, which has been missing in action since our Munich trip.

3. An REI gift card that was purchased for the older boy as an early birthday present, which I stuck in the cabinet to hide until it was time to give it to him…and then forgot about. He’ll be psyched to get it when he comes home this weekend! Oops.

4. Three copies of the Green Curry Chicken recipe that Jim loves to make; each time he puts it on the menu, we can’t find it and he prints a new one. Oops. Yesterday I put all of our loose recipes in a clear plastic folder.

5. The older boy’s coaching form for lacrosse. At the end of junior year, his coaches filled out sheets for every player, letting them know what they needed to work on for the following season. I made that kid rip his entire room apart looking for it because I knew it was in there somewhere. He never found it. Oops.

That was all great, but in the end what I was most excited about was the space I found. 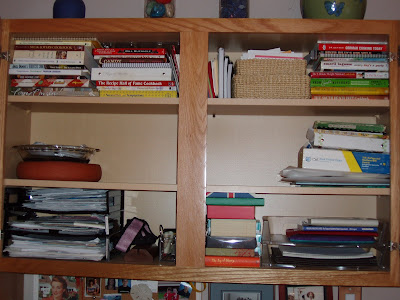