Another Hanukkah Tradition Lives On…

My dog is not stupid. In fact, the way her brain works, I wouldn’t be surprised if she has a whole other life that I don’t know about: maybe a doggie husband, a couple of puppies?

I got an unexpected reminder of how smart she really is today, when she carried on her sixth annual Hanukkah tradition of locating the gelt* (chocolate coins**) I had hidden (from her), and eating them, but not before she took off the wrappers. (Do you know how difficult it is for a human to take those wrappers off sometimes???)

Here’s the deal. I had the gelt in a Target bag (YES! Target sells gelt for Hanukkah! Woot!) and buried it under a pile of stuff on my desk.

Earlier today I was upstairs, washing the gray outta my hair. When I started the process, Roxie was in my bedroom, having a nice nap on her bed.

After I rinsed out my hair? Her bed was empty. No biggie; that happens. Sometimes she goes downstairs to sit in the bay window and howl at passersby. When I went downstairs to check it out, I heard it.

She was in her usual hiding place, behind the couch. I still didn’t know what she was eating, but as I moved closer, she heard me and started to move around back there in a total panic.

I had to totally bribe her with a Milk Bone to get her out of there (that would be really, really bad parenting if I were dealing with a child. Of course, I wouldn’t be bribing my child with a Milk Bone. Ba dum bump!), and she wasn’t even excited about that. I found out why when I saw what she had.

After I got her out of there and cleaned up the scene of the chocolate massacre, I checked out the scene of the crime. That sneaky little jerk dog stood on her hind legs, pulled my Target bag out from the stack on my desk just enough to rip a hole in the corner, and fished out two net bags of gelt. 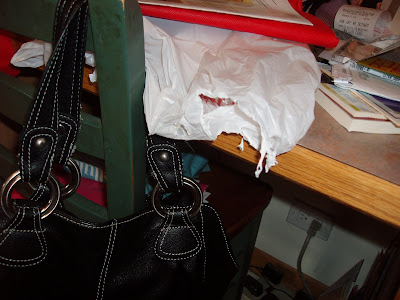 I was really, really annoyed for many reasons***, and, as always, amazed that she pulled it off again, for the sixth year, including taking the wrappers off. 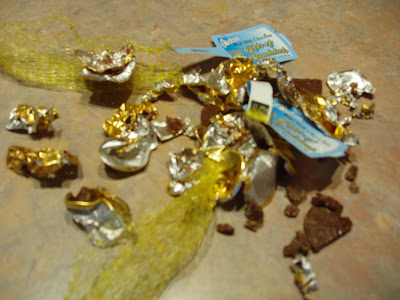 Next year? The gelt goes on top of the refrigerator. And the ladder goes to the neighbor’s house.

*This is not the first time she’s stolen and eaten candy, not by a long shot.
**Chocolate can be toxic to dogs. Do not INTENTIONALLY feed your dogs chocolate, and try to keep it away from them, as I always try to do.
***All is “not lost”: I’ll probably see the chocolate–and a piece of wrapper or two–again later tonight. Gross. Sorry.