I’ve been belly-aching–mostly to myself–about how unorganized our house has become over the past couple of years. A few years ago, I went through everything–EVERYTHING–and cleaned up, cleaned out, and generally streamlined wherever I could. I haven’t taken the time to do that since then, and I have slowly felt myself smothering under our clutter. It was for this reason that I decided to seize the opportunity I got this year, with an early occurrence of Hanukkah and now a couple of weeks during which, publicly, everything is quieter because most people are rushing around worrying about Christmas. I am starting my own home project, the 12 Days of Productivity.

I literally put a task on my calendar every day from today through Christmas Day (which is just another day around here), so I have a game plan. It’s a very, very ambitious project, to say the least, and even though I don’t know if I will finish everything, I know that I will make a huge dent in the projects I’ve been staring at with total annoyance for as long as I can remember.

I put my plan up on my Facebook status yesterday, and, though I got some kind words of support, I discovered who really, really, REALLY knows me.

Your Honor, Exhibit A:

Alas, they only reacted that way because they are two of my oldest friends. I’ll show them! (I hope.)

I won’t be blogging about this daily; rather, I think I’ll summarize when I’m finished. I did want to show you the behemoth I’m tackling today. (I’m currently on lunch break!) 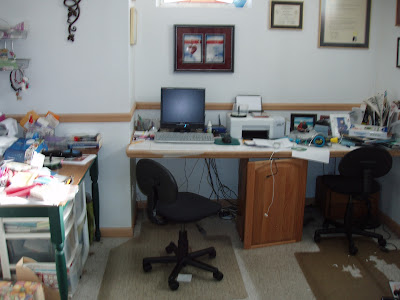 Previous post: HomeGoods Should Be Called HomeGreats. That’s All.