If The Quality Of A Birthday Is Any Indication Of How The Next Twelve Months Will Go, I’m Gonna Have An Awesome Year.

A couple of weeks ago, Jim asked me if I was getting excited about my birthday coming up. I said, “Eh, not really.”

It wasn’t that I was dreading it (I wrote about my thoughts leading up to it in my last post); I was looking forward to our family dinner out and evening at an improv comedy show, but I couldn’t say that I was jumping for joy about the birthday itself.

The day started off great and only got better. When I opened up my laptop for the first time in the morning, I had a flood of well wishes from my Facebook friends. I put up this status:

I went to Zumba class. Yay!

After Zumba, I took a nice, long shower and then spent a few hours creating holiday cards to sell at an open house we were having at work today. I really enjoyed just sitting around, CREATING, while watching some of the tv shows I had sitting in my DVR. It was a really peaceful afternoon, and I loved it.

Later, it was time for Jim, the younger boy and I to meet Julesie at a restaurant for dinner. On the way over, I felt just a teeny bit sad. My inner dialogue? Here you go:

“Aw, this is going to be the first birthday since 1991 that I won’t get to spend with the older boy. I wish he could be here (he wasn’t able to come home from school because of mass amounts of homework). It was inevitable that at some point, I wouldn’t be spending my birthdays with one or both my kids every single year, and apparently this is just when it begins…But…this is part of life. It’s supposed to be this way, and I’m sure I’ll talk to him later…”

After that dip in my morale and my pep talk to myself, we parked the car and approached the restaurant, where a friend of mine was enjoying a beer with her husband outside on the patio. We chatted with them for a minute and then said goodbye so we could go in and meet Julesie.

It took us a minute to find her, and when we did, we walked closer and–BOOM!–there was the older boy, hiding in the corner so we couldn’t see him from the front door. It was such a huge surprise, I couldn’t believe it!! He and Julesie had chatted at midnight and she asked him if he had enough homework done to get away for Saturday afternoon through Sunday morning (he did), and she drove the 90 minutes each way to get him so we could have a Fab Five birthday celebration instead of a Fab Four birthday celebration. So great! 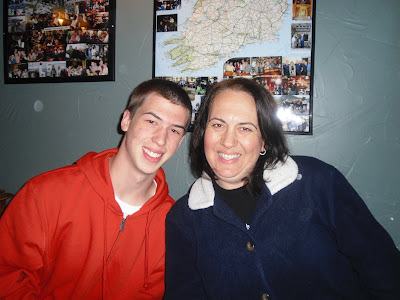 By the way, this photo cracks me up. Julesie took it before we arrived. 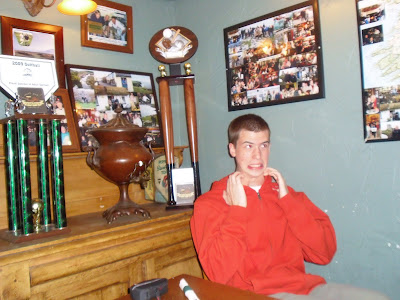 After dinner, we caught an improv comedy show, along the lines of “Whose Line is it Anyway?” It was hilarious, and it was so great to enjoy it as a five-some.

(Don’t know what “Whose Line?” is? Watch this clip, which is one of the funniest moments on the show, ever.)

At home, I got another great surprise. Julesie made me a rainbow cake! It was her first rainbow cake ever (making, not eating, of course), and when I saw it, it took my breath away. I dare you to look at this and NOT gasp in awe. 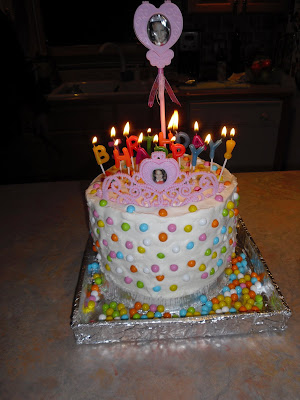 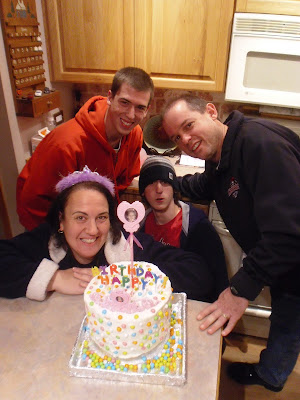 Being a more adventurous person in the kitchen (and, often, out of the kitchen, but that’s another post) than I, Julesie “deconstructed” the rainbow cake. Instead of putting all of the colors in one pan, letting them swirl together, she baked each color separately and then assembled them into a layer cake. WOW. I told her that I think it might be the prettiest cake I’ve ever seen. It left the one I made for her this year in the dust, that’s for sure. 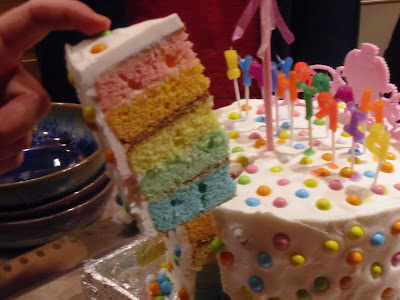 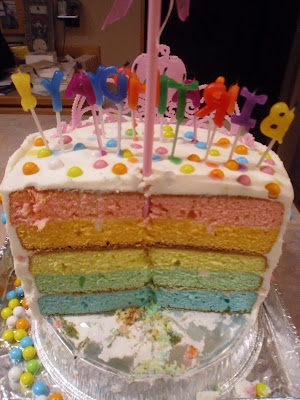 After cake? Presents, of course! I got a new binder for my Playbills (if you don’t know what I’m talking about, don’t worry about it: it’s a theater thing.), a gift card to a favorite workout clothing store, and THIS! 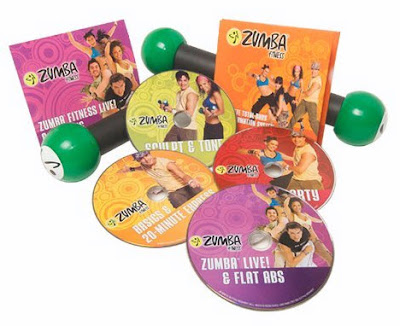 It was a great day, and a fun night. I thought the great stuff was done for the day, and then right before bed, I realized that we had to set the clocks back by an hour, and that was just more icing on the cake.

So folks, I think it’s gonna be a great year…don’t you?