The older boy’s college hosted their annual Family Weekend this past Friday through Sunday, so Jim and I made plans to go up there. (The younger boy originally–before he was struck with a three-day fever–had school on Friday and a full weekend of activities himself, so we left him in the great care of Aunt Julesie.) Actually, Jim had to be at work on Friday, so he planned to take the train in the evening, and I got to spend the day with the older boy by myself. It was a great day, a great weekend. 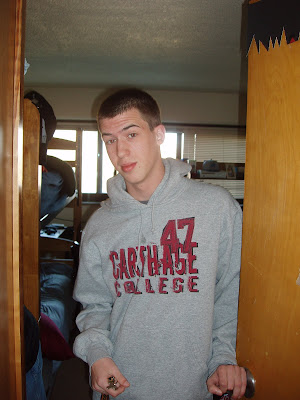 I won’t bore you with all of the details (especially because I am sharing tons of pictures!), but I’ll tell you some of my favorite parts.

Friday was the day on which parents could attend classes with their student. I was all over that, and a little disappointed that on Fridays he only has one class. The great news for me was that his one Friday class is second level German! Whee!

I didn’t take pictures because I didn’t want to embarrass him; in fact, I promised–especially because it turned out I was the only parent who attended that class–that I would fade into the background.

It was a great class. His professor is wonderful. The entire class was in German (I understood about 99% of it, which isn’t bad, you know?), and as luck would have it, they were in the middle of a chapter about Munich: yay!

After class we grabbed some lunch and ate in his dorm room, and then headed out to do some Hanukkah shopping at the local outlet mall, and to grab some provisions at one of our favorites, the Jelly Belly warehouse and retail store. (We skipped the tour: we’ve done it three or four times!) 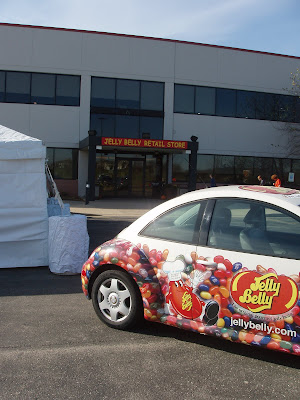 He would not pose for a picture in front of the Jelly Belly Beetle, so I went all paparazzi on him. 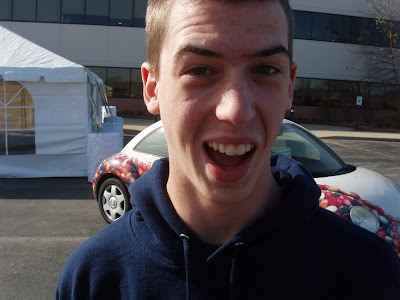 I was, of course, more cooperative. 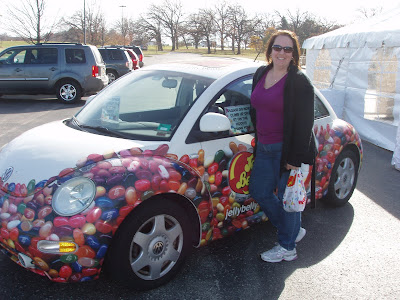 One of the great things about the Jelly Belly retail store is the sampling bar. You could stand there for two hours, trying all the flavors. Yummy. 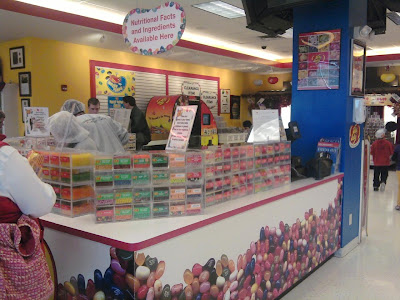 Flavors I WON’T be sampling, ever, are those in the “Bean Boozled” line. Blech. It’s a new concept which you can use to trick your friends. The flavors in this line look exactly like some of the classic Jelly Belly flavors, but taste way worse. 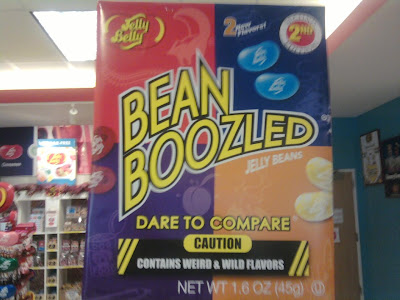 Booger or Moldy Cheese, anyone? 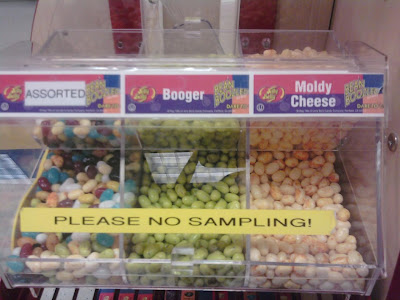 How about Barf, Canned Dog Food, or Skunk Spray? 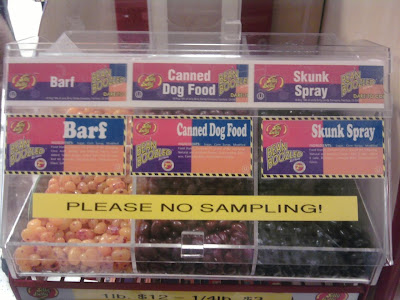 I didn’t think so. Blech. (I bet kids love them, though!)

After we did our shopping, we went back to the dorm room to play some video games and wait for Jim’s train to arrive so we could pick him up and head off to dinner. The older boy’s roommate was gone for the weekend, so we had the room to ourselves and enjoyed chilling out for a couple of hours before heading out again.

Here’s the view from his room at sunset: 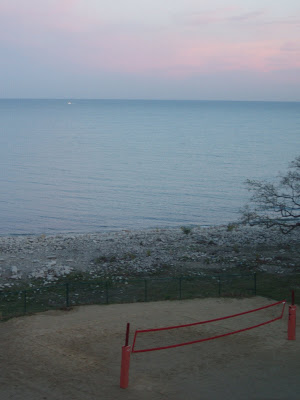 On Saturday we ate breakfast at a place that was once featured on Guy Fieri’s “Diners, Drive-ins, and Dives”: 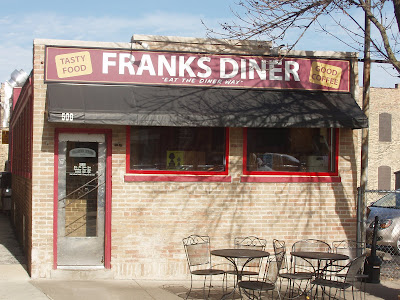 It’s an old train car, and it’s definitely a tight squeeze inside! The overall character of the restaurant is FUN. The entire staff is sassy in a humorous way (not as biting as Ed Debevic’s, but just as funny), and the food is delicious. The co-owners were front and center, cooking up all of the orders, and in fact I couldn’t take my eyes off the grill, which was full at all times. She handles more orders at once than I ever could, even in my imagination. 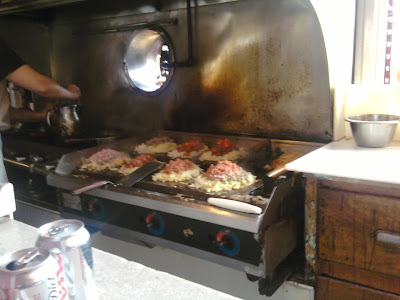 The “House Special” is the garbage plate, which is what Jim had. That’s a half order, by the way. 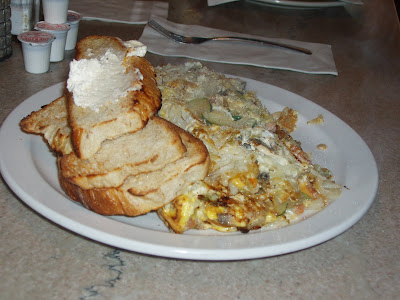 I can’t begin to describe how fun this place is (and we waited for a seat for about 40 minutes, standing right behind the people who were eating at the counter!), so please take a few minutes and watch Guy tell about it. You’ll want to go, I promise.

After brunch, we took in a Ladies’ volleyball match. It was pretty intense! 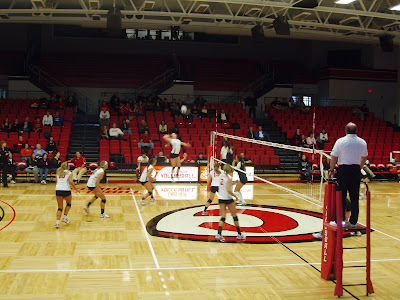 After helping the older boy rearrange his closet area and redo his storage containers to make more living space, we took a walk in his backyard, down at the lake. 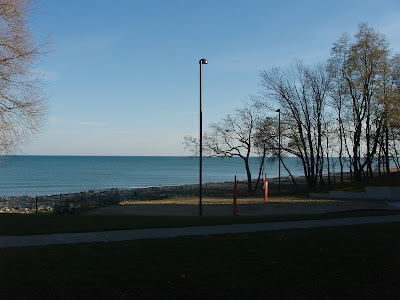 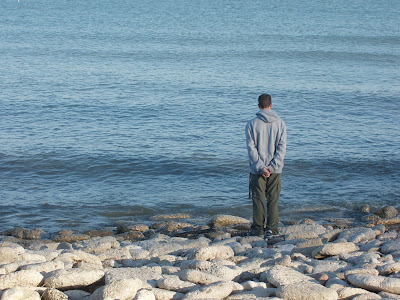 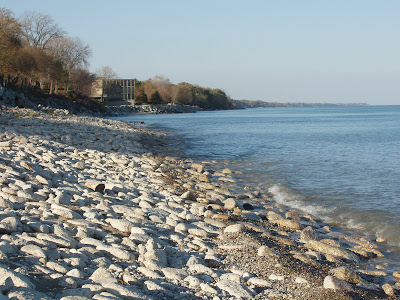 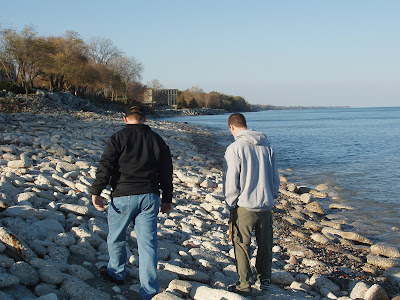 I loved these “chairs” that somebody created out of a few of the concrete “stones” that were all over the beach (to prevent erosion): 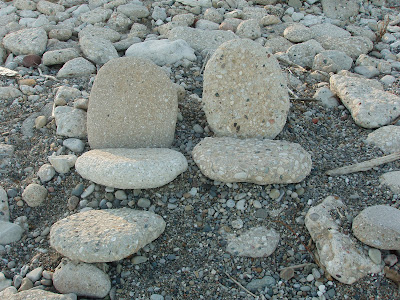 After the “tailgate party” (which was actually not anywhere near a vehicle OR the stadium: it was in a white tent with tables and chairs!), we went to the football game. It was FREEZING outside. Don’t we look cold? 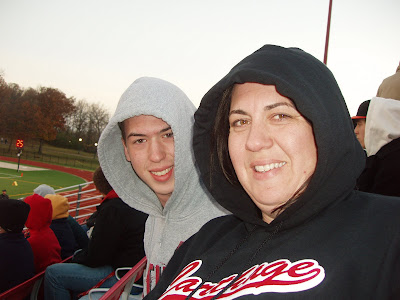 The cheerleaders had to be freezing too; at halftime they had skimpy black outfits on. I definitely saw teeth-chattering going on there. At the beginning of the game (below), they wore fleeces and pants. 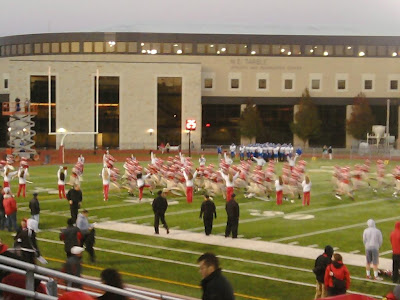 Our mascot looks suspiciously like Syndrome, the villain from “The Incredibles”. 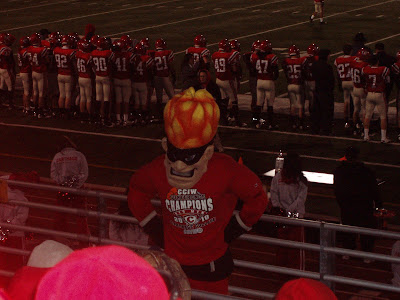 It was a jam-packed two days and, after an hour at Casino Night (which followed the game), Jim and I headed home to see how the younger boy was feeling.

He was much better: he and Julesie had a great time. They made Boo Berry bars, which he promptly sealed up and labeled. I wonder why he felt the need to do that? 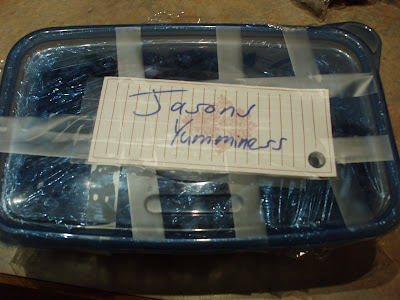 They also carved pumpkins and roasted seeds. I told Julesie that she’s a much better Halloween parent than we are. 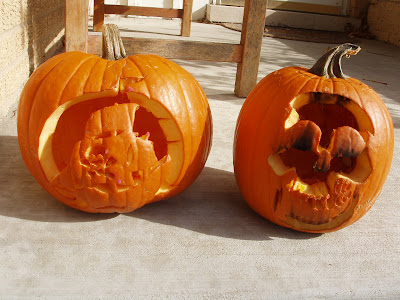 And now? We’re back at our normal routine (whatever normal is!). Hope you had a great weekend!

Next post: An Open Letter To Customer Service Representatives