The Balance Has Shifted

People are constantly asking me how things are going since the older boy left for college. I usually give a longer answer than is probably expected or necessary, but it’s been an interesting phenomenon.

Though I really miss seeing my older son daily (yet, might I add, technology is fabulous, making it possible for us to reach him for a quick second or a long conversation whenever we want, using one of several methods), those of us left behind are doing well, in spite of the hole he left.

What is fascinating to me (and what happened quite unexpectedly) has been the shift in the overall atmosphere in the house.

The older boy’s personality contains the control freak and perfectionist tendencies that he inherited from me (sorry, bud!): we both worry about things that are out of our control, and our attention to detail is so focused that it is annoying–at best–to others in our path.

On the other side of the coin, Jim and the younger boy are much more laid-back about things. It’s not that they don’t care; they just have a firm grasp on what in life can be controlled and what can’t and, thus, isn’t “worth” worrying about.

Before the older boy left for school, though the amount of people on each “side” was even at two-two, the control freaks were winning over the day-to-day mood of the house. The intensity of Type A people can really throw shadows where they aren’t needed.

Since September, I’ve been the only full-time control freak around here and, amazingly, I find myself relaxing a little bit. I’m still focused, but my focus has changed from GO-GO-GO! all the time to something a little more calming, a mood which comes in little waves. I have moments in which I actually feel–dare I say it?–laid back. Practicing the art of the shoulder shrug when it comes to things that really don’t matter much in the grand scheme of things is freeing, to say the least.

Mostly, I “blame” this guy: 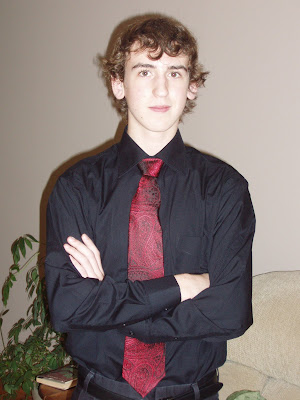 It’s pretty incredible what you can learn from your kids, completely by accident, don’t you think?