I don’t know about you, but I’m still recovering from the weekend. Remember that picture I shared last week, in an attempt to describe to you how I’d feel after the weekend? Well, I was right.

That’s not to say that the weekend wasn’t fun, though. I had a great time, but I worked SO, SO hard.

Midwest Mania, for those of you who, like me, have been too busy to catch up on all of the blogs you read, is a fitness conference that is put on by SCW. Because I am an ACE-certified group fitness instructor, I need continuing education credits (CECs) to recertify, and going to a fitness conference is one of the ways to earn my credits. Last year I discovered that you can actually work at Mania conferences and pay a fraction of the cost for CECs, rather than pay full price and just go as an attendee. I did that last year, and loved being a part of the behind-the-scenes action. Well, except for when I was so sore I could barely move, but whatever.

At last year’s staff party I won my choice of going to any Mania for free (as an attendee) or working one part-time, with a friend, with no charge for the CECs. I chose the latter, and this year my friend Fran went with me. I did my best to tweet updates, which I’ll include below, but on Sunday we were way too busy for much of that.

Thursday evening was the staff meeting, during which we found out that there were about 85 of us staff assistants working the weekend. Oh, and they normally have about 140. (insert ominous music here.) No matter, I still felt energized and ready to go when the meeting was over.

TWEET: Just got home from the staff meeting for Midwest Mania. SO EXCITED for this weekend! Planning my workouts…

On Friday, we had to report for duty at 8:00 a.m. Fran picked me up at 6:00, because we didn’t know how bad traffic would be. As it turned out, we made great time and had an hour to hang out in the conference hotel lobby. The day ahead included being a part of the “turnaround team” (moving workout equipment from room to room as needed, in between sessions) and taking whatever sessions we wanted to.

TWEET: Sitting in the lobby, wasting time before reporting to work! I bet we’ll be setting up steps first…

I was wrong. The steps that haunted me last year were replaced this year by huge blue stability balls. We moved 85 of these balls (not to mention the 80 Bosu Ballast Balls) from room to room and floor to floor on several occasions. Oy.

After our first turnaround of the day, it was time to hit our first session. Originally I had planned to take a Kettleweight class, but we were told at the Thursday night meeting that if we wanted to take a Realryder class, we should do so as soon as possible because once the buzz about it started, classes would fill. Fran and I scurried over to the room, hoping we’d get bikes: we did!

TWEET: Getting ready to do a Realryder class. (google it!) I AM IN LOVE.

The Realryder bikes are SO cool: they were developed to be a more “authentic” type of bike ride, closer to the experience of riding on an outdoor bike. The bike actually moves under you, so you can feel the turns and you are forced to use your core muscles a little more when you stand up, out of the saddle. When we first got on the bikes, it was a weird sensation: the bikes lean about twenty degrees to the right and left. When you’re used to truly stationery bikes like Fran and I are, this experience is sort of mind-blowing.

I pedaled slowly during the orientation, and was looking forward to the actual ride.

By the end of the ride, I was very tired, and very sweaty. And totally in love with my bike.

It was time for the next turnaround, and we were moving balls again. Lots of them.

TWEET: I have always wanted to use kettlebells…just not by moving five tons of them.

Our second session was the one to which I was most looking forward: Zumba. Taught by master instructor Jani Roberts, it was truly a cardio party as the description in our conference brochures claimed. It was so much fun, I haven’t stopped talking about it since. Jani started out by telling the newbies in the room that she teaches nonverbally: all we had to do was watch and imitate, and if we ended up not doing exactly the same thing, no big deal. The goal was to “feel the music”. Fran and I were in the back of the room (I made sure to get myself a spot right in front of a speaker: on purpose!) Class was phenomenal. It was fun, it was challenging, and it was a great workout that worked muscles I didn’t even know I had. I didn’t have too much of a problem following Jani, because she taught on the 8-count, which is how I teach, so I could tell when she was getting ready to change movements. My only problem was the lack of movement in my hips. I tried my best, but I’m going to have to work on loosening that area of my body up, for sure. WD40, perhaps?

TWEET: ZUMBA! More gyrating in this rm than I’ve ever seen. (including me) #shakingwhatmymamagaveme @houseofjules

Here’s a video of Jani teaching Zumba with a couple of other master instructors, back in January. Fast forward to 5:00 (she’s the redhead with the long ponytail), and check out the kind of moves I was doing!

After class, another turnaround, and more balls. 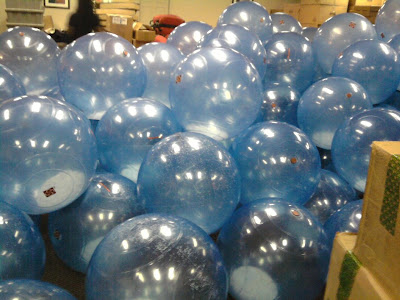 The turnaround schedule during the lunch session was tight, so I skipped the session I had planned on taking, because I would have only gotten about twenty minutes of it. Instead, I hung out in the staff room, having “lunch” with a couple of new friends.

TWEET: U should see all the food in our staff room. Never think that fitness pros don’t eat.

After lunch and more equipment handling, I made a decision with my heart rather than my already sore body:

TWEET: Walking around like an old lady already. My waist kills. So I decided to take Zumba toning class! #carpediem

I was truly glad I did. Jani taught this class too, and I enjoyed it almost as much as the cardio class. My hips seemed to enjoy it MORE than the cardio class: they were more loose in the afternoon!

And then, in the last couple of minutes of class–TWINGE!–my knee told me in its own special way that I needed to back off a bit.

TWEET: My knee says i’ve had enough 4 today. So I think I’m done, but I’m going to wait until I get another message. From myself. #bestinshowftw

One final ball-moving session. This time, we had to move the big blue stability balls (85 of them) to the LOWER LEVEL of the hotel. This is where things got a little hairy. We all did our best to grab two of them, one under each arm. This made walking just a little difficult, because the balls kept slipping down and we kept having to readjust. We all stepped onto the escalator, sideways, with the balls. Please enjoy the visual aid I have lovingly created for this story: 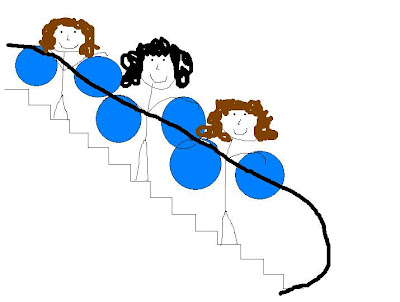 So there we were, happily riding downstairs with our arms full of balls. One of the ladies who works for SCW made the comment that this would probably turn into a disaster because she’d seen it before, but most of us didn’t hear her and the ones who did hear her didn’t heed her warnings.

Well, because of the awkwardness of carrying a ball under each arm and having to ride down an escalator sideways, most of us put one of our balls on the step below us, allowing it to ride down all by itself, under our watchful eyes. That’s when disaster struck.

TWEET: One of my fellow Maniacs (staff members) broke the hotel with a fitness ball. #oops

Okay, she didn’t BREAK THE HOTEL, but she did stop the escalator. How? Well, her stability ball rode happily to the bottom, and before she could sweep it back up into her arms, the plastic of the ball started to “grab” the warm moving handrail. The handrail wouldn’t let go, and the ball squeezed itself under the bottom of the handrail at the bottom, like so: 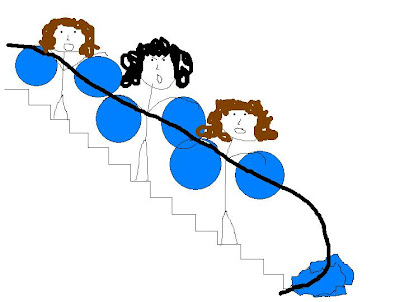 The escalator slammed to a stop (I think one of the girls pressed the emergency stop button), most of us screeched, and Fran (whose ball was NOT the one stuck, by the way), following the advice of the SCW lady, pulled the plug on the ball to let the air out so we could remove it from its tight spot. Unfortunately, the escalator remained perfectly still. Oops is right.

Friday night we had a nice dinner at the staff party, and Saturday we stayed in our town because Fran had an event to attend and the younger boy had Homecoming, so we decided to take a complete rest day and return to work on Sunday. I needed it, too: I was really, really sore. But not so sore that I couldn’t move at all:

TWEET: I walked downstairs unassisted and EVERYTHING. I might actually get some stuff done around the house. Very excited.

On Sunday, Fran and I were the door monitors in the Schwinn cycling room. (yay!) I originally intended to take all three spin classes, but I only did the first one. Fran did the second one, and then we went to the staff breakfast meeting.

TWEET: How do u feed the staff at a fitness conference? On steps of course! 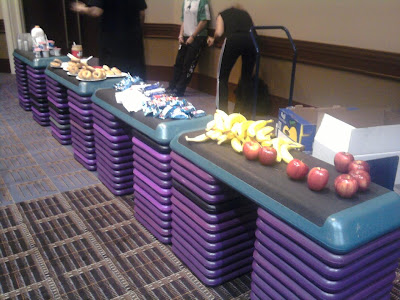 Fran and I went back to the spin room because class number three was starting up, but instead we took apart some of the bikes.

We helped James for a couple of hours (so fun!) and then worked our butts off (figuratively speaking, of course), packing up all of the equipment after the final sessions were over. We had to pack and move everything to a staging area so those who were loading up the 52-foot truck could get it all from one place. We were all so tired and ready to be done; when Fran and I were finally released, I may have done a little jig.

All in all, another fun, hard-working year. I summed the entire weekend up with one last tweet:

I couldn’t stop thinking about Zumba. I think it is exactly what I need right now. After the conference I came home and did an internet search for local Zumba classes, and to my surprise, I found several instructors who hold classes within five miles of my house! I spoke to one on the phone and made arrangements to try my first class with her, today.

And for THAT story? You’ll have to wait until tomorrow.

Next post: Call Me Selfish, But I’m Keeping Zumba Just For Me.