When we moved into this house, it was December of 2000 and the boys were eight and five. They were a great age for giving us input on how they wanted their rooms decorated. The younger boy? Well, he wanted his walls white. Weird, I know, but that’s what he got on three of them. The fourth wall had wallpaper on it–pink hearts–that the previous owners said they put up because the wallpaper under THAT just would not come off. So we wallpapered over the pink hearts with a nice vertical stripe pattern of blue, white, and brick red.

The older boy more than made up for the boring color scheme in his brother’s room. When asked what color he wanted his walls painted, he declared “Dark blue!”

It was Jim’s nightmare.

For me, though, a fan of the show “Trading Spaces” (when it was still new and had a HOST, and when it was still entertaining), the idea of taking a dark blue color scheme and running with it was something so totally exciting I couldn’t believe the possibilities.

We went to buy the paint and picked up the wall color plus a can of color that was a couple of shades lighter for the ceiling. I remember that it took an entire weekend for Jim and I to get that color on the walls, and the ceiling (which we did first) was a bear.

Jim hated it from the first brush stroke.

I loved it, as did the older boy.

I picked up some string lights that were sound-activated (cool!) for the perimeter of the room, and made a “valance” out of old CDs. After adding some silver accents to the room (including the letters of his name for the wall) and reusing his bright red bedding, this kid had a fabulous room. 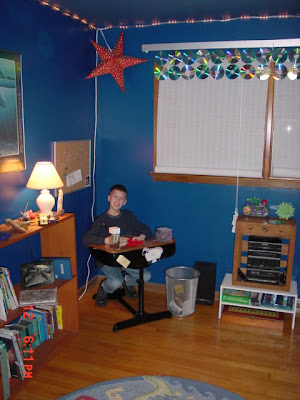 And his father has despised the color ever since.

Over the years, I’ve heard lots of the following:

“THAT COLOR! UGH!”
“Re-painting that room someday is going to be a pain in the a$$.”
“That room is entirely too dark.”
“The ceiling color in that room sucks.”
“I hate that blue.”

Ten years after the room renovation, the room’s kid is in college.

The discussions about what to do with his room began in the spring. The younger boy, who lives in a small, square room, wants his brother’s big room.

At first, I suggested that he just use his brother’s room as his guitar studio: he’d have the use of two rooms but we wouldn’t be yanking his brother’s room from him while he was away at college, which is what usually happens to those first-time freshmen. He liked that idea.

At some point, Jim had a discussion with him, saying, “Hey, why don’t we move you into the bigger room?”

Of course the younger boy liked that idea better. And I came around eventually, but we’re doing things differently from other families (surprised?). I am adamant that my older son will not just come home one weekend, seeing all of his belongings moved and set up randomly in the other bedroom. Sometime in the next few weeks on one of his weekend visits home, he will help us with the room-switching, so he can set up the smaller room the way HE wants it to be.

And then there’s the issue of the walls. A few months ago, I was chatting with the younger boy about this room switch, and I asked him if he liked the blue or not. He said, “Yeah, I want to keep the blue!”

More recently, it came to my attention that his father got to him and had discussions about the walls. Uh-oh. Now?

Now he wants to get rid of the blue.

Don’t get me wrong, it is totally up to him and I’m happy to help him decorate the room with the color scheme of his choice, but the end of the blue period makes me a little, err, blue.

Know what else makes me blue? The thought of how much primer and paint it will take to cover it.