My sister Julesie had a birthday on Friday, and because of the fitness conference I had this weekend–recap post is in progress–and the fact that the younger boy had the Homecoming Dance on Saturday night, we had to schedule the birthday festivities for this evening. We went out to a favorite restaurant, and then it was, of course, time for rainbow cake. Regular readers already know that the rainbow cake is a staple of almost all of our family birthday celebrations: our mom has made us rainbow cakes since we can remember, and I’ve carried on the tradition. (Want a partial look back? Click this.)

The recipe itself is phenomenal: it’s pound cake (ish), which means it’s structurally heavy enough to really hold the shape of those cool Wilton cake pans, of which I have many (Need a Harry Potter cake? Let me know.). The last couple of years have brought both laziness (some of the detail on those pans is crazy and can take up to five hours to decorate!) and a renewed sense of creativity as I often choose to use a plain-shaped cake pan (circle or rectangle) and just creatively frost it.

For Julesie’s birthday cake today, I was inspired by the many Food Network cake challenges that we I watch around here, and decided to create a stack of gifts.

Something else I’ve been mixing up (no pun intended) is the coloring of the batter. Traditionally the rainbow cake is the four colors of food coloring you buy in the store: red, yellow, blue, and green. The last couple of years? I’ve used my Wilton color instead, which blows open the possibilities. Today’s cake was burgundy, violet, pink, and yellow inside. 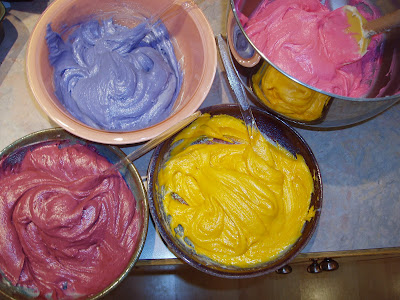 After layering the colored batter into different sized loaf pans, it was ready to bake! 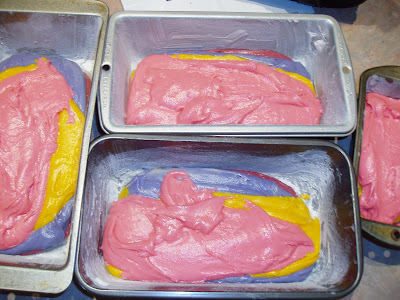 I wasn’t sure if the bake time would be much different since I was making four smaller cakes rather than one large one, so I had to keep checking on it. 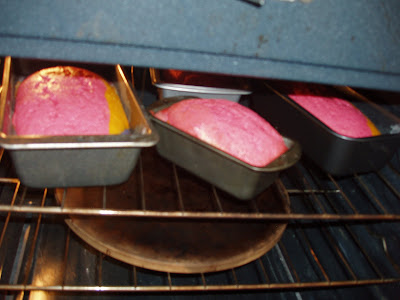 Originally I was going to stack them straight up, but the younger boy suggested that I offset them. 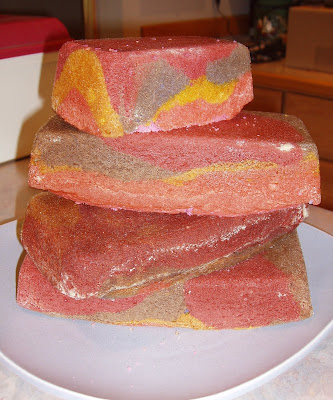 After 2 1/2 hours of decorating (during which I watched three episodes of “Glee” online: multitasking rocks!), I had a stack of yummy presents. 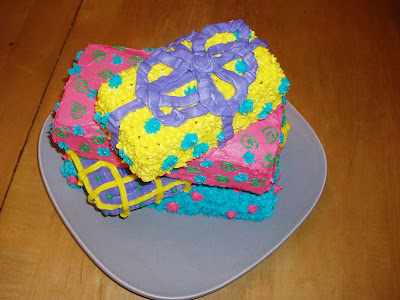 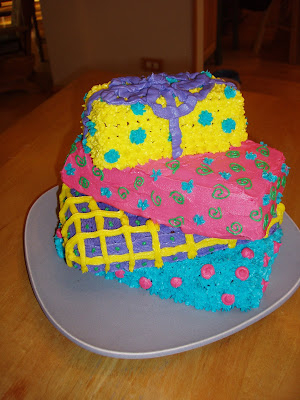 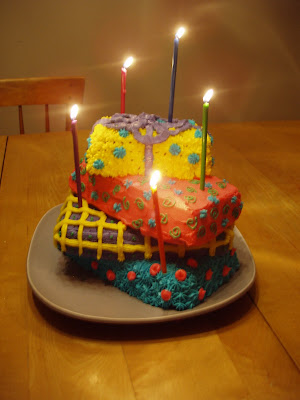 Previous post: I’m Showing You What I Did So You Can Imagine What I’m Doing