The Eyes Have It

Even though some people would try and convince you otherwise, dogs can’t talk.

Our first beagle, the late, great Bijoux, communicated pretty well with us in her own way. WE thought so, anyway. When she had to go outside, she would sit at the back door and bark once, or if it was more of an emergency situation, two or three times. If she was hungry, she would sit near her bowl and, you guessed it, bark.

Sometimes she barks while sitting in the vicinity of the door or her bowl, just like Bijoux did, but usually her cues are non-verbal.

She uses a staring technique which would be extremely hazardous if her eyes had lasers in them. (I think she believes they do.)

When we’re doing our own thing in the house, not really paying any attention to the needs of this adorably feisty beagle, she is plotting. After locating the person who happens to be closest to…

A. the counter on which her treat jar is
B. her food and water bowls
C. the back door
D. the refrigerator (where the carrots–her sometimes treat–are stored)

…she sets her eyes on him or her and does not let up, no matter where in the room this person goes. She keeps her body completely still, her eyes firmly locked on her conquest, focusing in as if her life depended on it. When that person is me, I have a hard time ignoring her; for one thing it’s just hilarious. Also? I think it’s pretty smart…and then I reward her with what she’s waiting for*.

The men in this house aren’t usually moved into action by her laser eyes. I present to you Exhibit A, hot off the presses from an hour ago. The younger boy was eating his breakfast, blissfully unaware of the fact that the hairs on the back of his neck were being burned off by laser eyes. 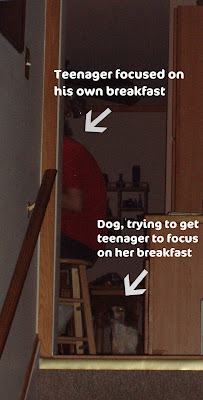 Exhibit A
He finished his cereal, got up, and put his bowl by the sink**, all while being watched by a dog whose only moving body parts at the moment were her eyeballs.

He would have walked out of the kitchen entirely, had it not been for me asking him to feed the dog.

Good thing some of us can talk, I guess.