Our family has always had the most fun on our official “Fab Five” outings and events. (If you’re new here, the Fab Five is made up of me, Jim, our sons, and my sister Julesie.) One of our best-known adventures here on the Scrawl was the time when (two years ago) we got together to make international burgers–including a German burger with mustard and sauerkraut on it, which my German twin Kat was disgusted by–in honor of the premiere of “The Amazing Race”, one of our favorite shows.

This past weekend, the older boy came home from college for a special Fab Five event: attending a live performance of the musical “Rock of Ages” in Chicago, starring Constantine Maroulis. 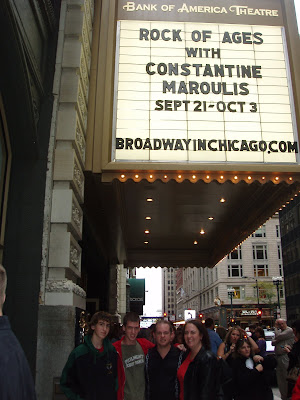 The fifth member of the Fab Five took the picture, in case you were wondering.

The show was FABULOUS (Go see it!They’re on a national tour!)! I wrote a little bit about the show today at The Music Mamas.

The fun didn’t end there, though. I almost completely lost my mind (in a good way) on Friday night when I accidentally discovered (while doing some research online) that the Original Rainbow Cone, a Chicago tradition on the far south side, now has a location in the Loop. One day a few summers ago, the boys and Julesie and I were in the car most of the day trying to visit a few local fun spots, most of which were closed (I didn’t check hours and such before we got on the road), and the last of which being the Original Rainbow Cone. After almost a whole day in the car, covering the north end of Chicago and then heading all the way south, I can tell you that the rainbow cone was one of the best ice cream treats I’ve ever had. Good times.

So after “Rock of Ages”, we hoofed it about 1/3 of a mile down State Street to the Halsted Street Deli. The Original Rainbow Cone is literally served through a door on the other side of the deli from their counter. (Hey, it doesn’t have to be a large location to sell great ice cream!)

What is an Original Rainbow Cone, you ask? Here’s a visual: 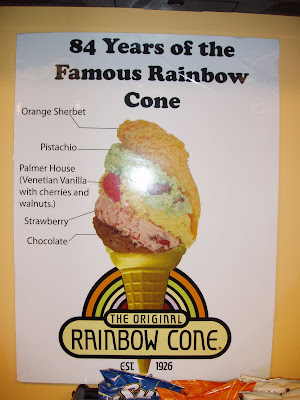 And here’s the real visual, my cone: 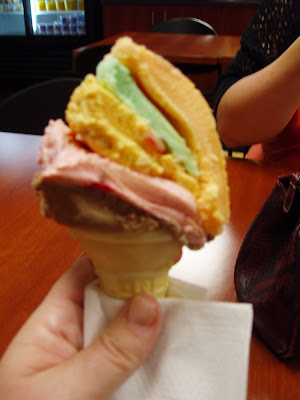 I was happy to discover that it didn’t require an entire day’s worth of riding in the car to thoroughly enjoy a rainbow cone. It was YUMMY.

Fabulous day for the Fab Five, don’t you think?

Tagged as: The Music Mamas

Next post: How To Drive All Over Chicagoland Without Seeing A Thing. Almost.

Previous post: Nine Months Overdue, But Who’s Counting? (Besides Me)