Passion For Learning: A Visit To Scholastic Headquarters!

I was honored to be on the invite list for the Scholastic Breakfast in New York City during the BlogHer conference.

Then I found out that Ms. Frizzle would be escorting us to the company headquarters, and I was psyched. 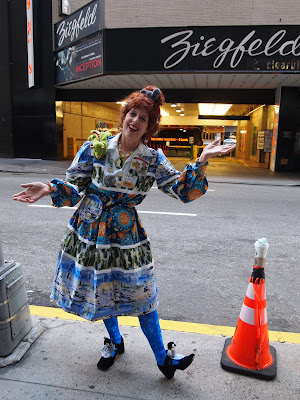 Ms. Frizzle will always hold a special place in my heart; The Magic School Bus books were a staple of the older boy’s childhood. They were his favorites by far, as was the animated television show.

In fact, for his birthday one year (I think he was seven. Maybe eight.) we did a Magic School Bus science party in our backyard, complete with a huge school bus I created out of sheets of cardboard (big enough for all attendees to play in at once), various stations with different interactive science experiments, and a Magic School Bus cake. It was one of the best parties I’ve ever thrown for my kids, hands down.

So you can imagine that my seeing Ms. Frizzle, live (I can’t imagine any woman–other than Lily Tomlin herself, the original voice of Ms. Frizzle–who could be a better live-and-in-person Ms. Frizzle than that woman, above)

Our shuttle to the event? Well of course…a school bus! 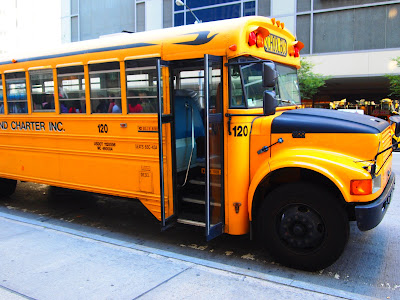 As we rode the bus from the New York Hilton down to SoHo, where Scholastic headquarters is located, I chuckled to myself because I noticed that a bus full of adults sounds EXACTLY the same as a busload of school-aged children. Everyone was excitedly talking about what was to come, and I felt like I was back in school, only it was way more fun.

Upon arriving at headquarters, we were all dazzled by the Harry Potter promo in the lobby, and just walking through the building was thrilling. Upstairs, we found tables that were set up with gorgeous centerpieces containing, of course, books! 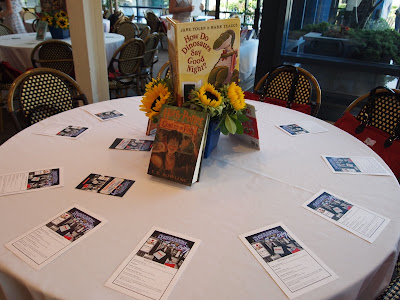 While we waited for all of the buses to arrive (There were two or three, I think), a few of us strolled out onto the roofdeck, and found not only a great view, but a beautiful place where I imagine the Scholastic folks do a lot of hanging out. 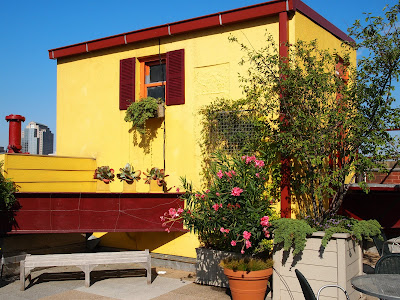 The breakfast was great, but of course none of us really agreed to attend based on the food. The best part of the breakfast was getting to listen to some of the people from Scholastic speak to us. Billy DiMichele (VP of Corporate Productions and Creative Services) started off with an intro and was the emcee for the morning. We then heard about the books which will be released in the near future (from Tracy van Straaten of Trade Publicity), what’s happening with the Scholastic Book Clubs, including ONLINE ORDERING (!!) (from Carol Marchesano), and trends in education, including ideas for parents to promote reading (from Francie Alexander, Chief Academic Officer!).

We learned about “Read Every Day. Lead a Better Life.”, which is Scholastic’s Global Literacy Campaign. It is based on the Reading Bill of Rights, which you can read here.

What I loved was how clearly passionate all of these people are, about books and Scholastic itself, as well as connecting with parents and educators. You would think that would be a given, considering the company they work for, but I never take anything for granted. It was just pure pleasure, listening to all of them, and when they were finished talking, I was a little sad: I could have listened for much longer! (and I also wanted to get back to the hotel and READ!)

At the end of the presentations, we were given some great gifts to go with the empty book bags that were at every place setting, one of which was a $15 gift certificate to use in the Scholastic Book Store downstairs (which was total HEAVEN!), and so off we went! (Disclosure: we were given assorted books and other Scholastic products as a gift, none of which affected what I wrote for this post, by the way!) 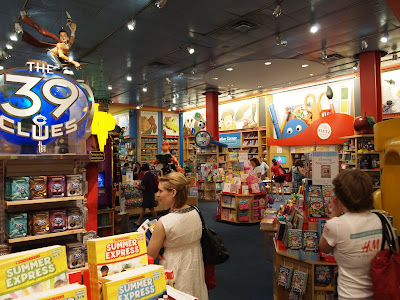 Authors Elisha Cooper and Raina Telgemeier were in the store, signing copies of their books. I bought one of Raina’s, (“Smile”) for myself. I also bought a book for Bean, and pre-ordered MockingJay, the latest release in the Hunger Games series, for the younger boy. 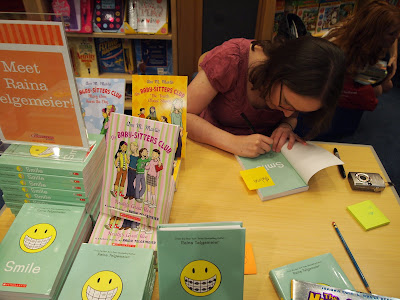 As I was walking around in the store, I caught up with Billy DiMichele and told him what a wonderful event his company put on. He chatted with me for a few minutes and told me that it meant a lot to him to get my feedback. He and the others I met that day are just super people, and I could’ve hung out there for days. (Let me know if I can come back, Scholastic people! I’ll make cookies!)

Before I left, Ms. Frizzle found me, and she was happy to pose for a photo. 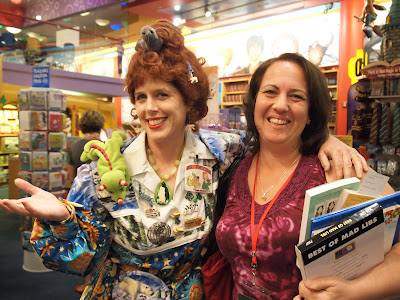 The takeaway from that morning? It IS a better life with books. Truly, it is.

Thanks to the folks at Scholastic (including Ms. Frizzle!) for a memorable day!

Next post: Go On Vacation To Germany With Me, At Your Leisure!

Previous post: Random Thoughts and Pictures: German Style (Or, “I Guess It’ll Have To Go Here”)