When Jim and I were newly married, he was in the Navy, on sea duty. His ship’s battle group was out to sea quite a bit. In fact, in the first four years we were married, he went on three six-month cruises. That’s in addition to one-, two-, or three months out here and there, as well as the cruises that only lasted a week or two.

Ahead of his departure, it was awful. The anticipation of being apart was really pure hell. All of the preparations we had to make each time he left and just the emotional roller coaster we went through on a continual basis was awful. We dreaded these cruises like crazy.

And then, BOOM, he left, and the tears stopped. I figured out how my new, daily life would go and just kept on living it.

In an interesting turn of events that I never would have predicted–even after living that Navy life so many years ago–we dropped the older boy off at college over the weekend and…I was not a hot mess.

Oh yes, you read that right. I did not shed a tear.

I’m not sure why I got through the weekend without using one Kleenex, but I have a couple of theories. First, the logical part of me always knew that this was a happy thing and an inevitable event: of course he would have to leave our house eventually.

Second, the funny thing about raising kids is that, just by the way their activities vary and expand as they grow up, our son was–like any typical teenager–often out of the house working, going out with his girlfriend, or hanging out with friends. By nature, parenting a teenager is prep time for parenting a college student.

Perhaps finally writing my last post helped me out, too. I had been simmering on that all summer long. In my three years of blogging (and nearly 1000 posts!), I have NEVER, EVER thought so hard about how to build a single post. It is one of my favorites ever, and came directly from my heart. Perhaps getting that out left me with a sense of peace about it all.

Or just maybe, seeing his dorm room for the first time soothed me.

Whatever the combination was, it was much like taking off a Band Aid (thanks for that comparison, Ri!). The anticipation is murder, but once you rip it off, you realize it wasn’t that bad. I felt completely at peace when we left him on Sunday, and that was a great feeling.

Here’s how it went.

First, we had to take the “going off to school with the backpack” photo. He went with a much different pose than all of the other “back to school” photos I’ve taken of him. I reflected on how, when he went to kindergarten, his backpack looked huge. Now? Not so much. 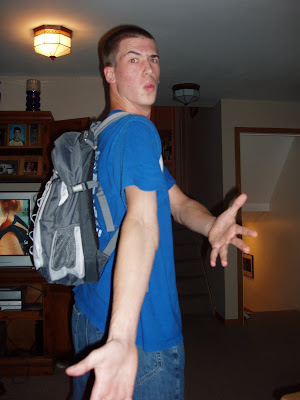 The actual “move-in day” at the college was on Sunday, but they allowed families to bring a load of stuff on Saturday if desired, so we did that. It was worth the three hours (round trip) of driving, because we fit almost all of his things in the truck that first day, and would only have to make one trip from the car on Sunday. 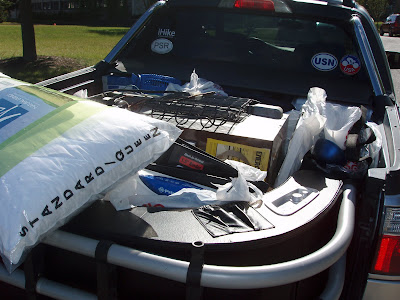 I was happy to see that the door decorating tradition of the Resident Assistants on each floor of the dorm is still intact. They were doing that when I went to college, too! 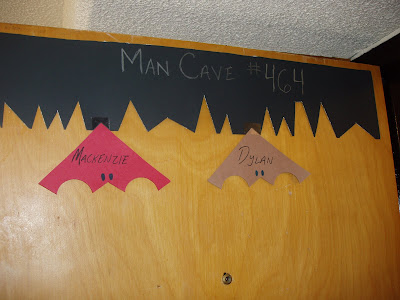 Our next discovery? His room has all new furniture, including new mattresses. New stuff FTW! 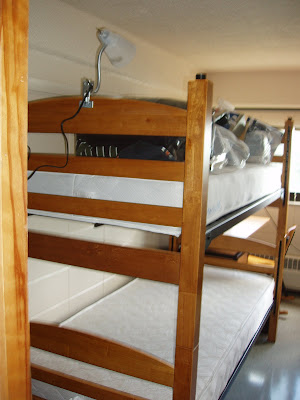 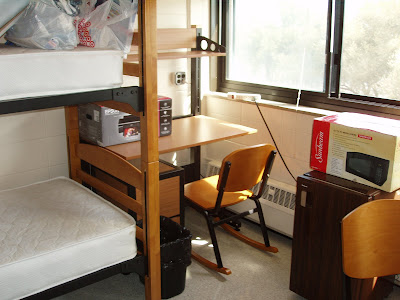 As we were unloading the case of Sprecher soda and two 12-packs of Coke, he suddenly felt like that amount of soda might be embarrassing or something, so he put the Sprecher in the closet and the Coke in his dresser drawers. I don’t know why I giggled uncontrollably about that, but I did. 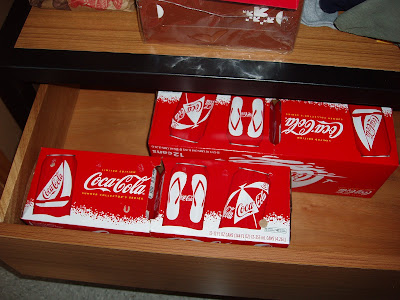 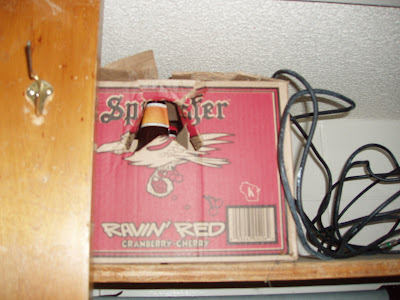 He totally hit the jackpot on the view from his room. The only things between him and Lake Michigan are a sand volleyball court and some rocks. 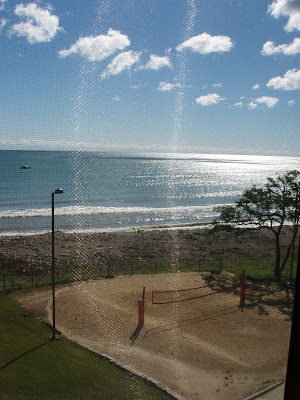 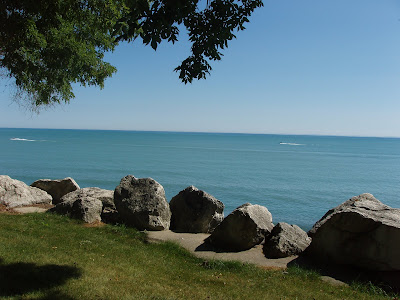 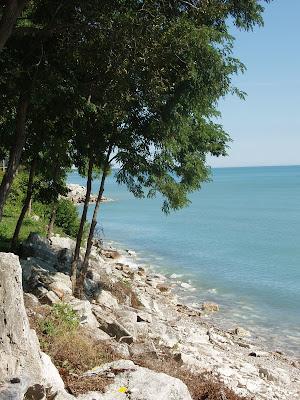 On Sunday we headed back up there for the final move-in, and to set up his room. His roommate had dropped off a bunch of stuff after we went home on Saturday, including a loveseat. They arranged the room perfectly; it’s a little full of furniture, but the boys have lots of storage space and they can see the tv from the loveseat and from their bunkbeds.

As we started to set up his room, I tried to hang back a little bit because I knew that he wanted to do most of it himself. Jim was helping with the stuff that needed to be put together, and the younger boy, like me, ended up being in the way. I knew that Jim was more emotional than I was and needed to be doing things to help, so the I sat on the loveseat with the younger boy, playing games on his iPod Touch. It was the best place for us to be!

Sitting there happily, watching the room get set up, was fun. I was filled with excitement for him, and, after all the tears I had already shed over the last few months as he and I gathered the stuff he would need for his room, I was able to keep the smile on my face with no effort at all. 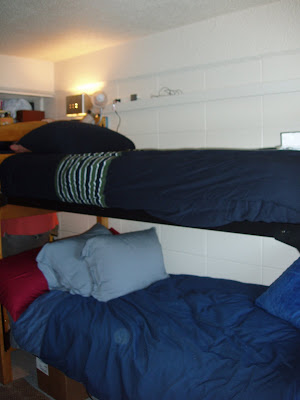 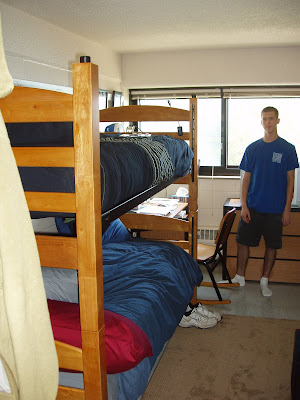 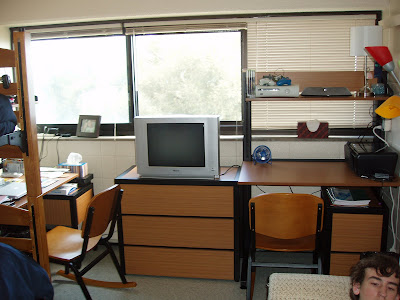 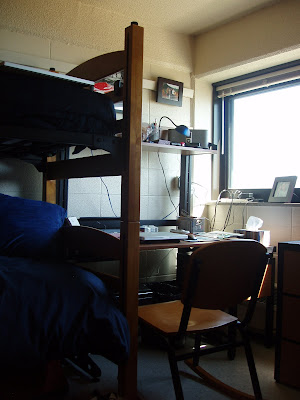 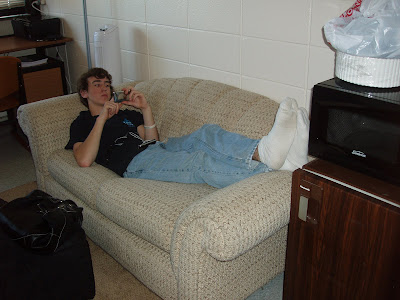 When everything was finished, his roommate finally arrived. He seems like a great kid, and his parents were very, very nice. I’m really excited to get to know them.

There was a New Student Convocation and then a lunch on the lawn of the College President’s home (on the north end of campus). After lunch, we walked to the bookstore so the older boy could pick up his textbooks and so we could get him an ethernet cable. We returned to his dorm so I could set up his computer, and by the time I was finished, the parent program (called “Now What?”) was beginning and we were late. Jim and I decided to skip it and just say goodbye. We didn’t feel like “Now What?” really applies to us. We know what comes next, and felt like we just needed to rip off that Band Aid and go.

And so we did. After quickly hugging our son (and then making him hug his brother), we got on the road for home. Rather than wallow in sorrow and tears, I relaxed into my seat and settled in for a nice, long, happy nap.