They* Made Eating Fun.

A few years ago, Jim went on a week-long business trip to Japan, accompanied by a co-worker friend. This co-worker had never been to Japan before, and drove Jim crazy with the massive amounts of pictures he took, all along the way. He took a picture of EVERY SINGLE MEAL he had while in Japan, too, and the idea of that was pretty funny to us.

Though I didn’t take pictures of every single meal we enjoyed, I’m sure it felt like I did, to Jim I got some pretty good representative shots that will give you an idea of the fabulous food we consumed while overseas.

Enjoy!
(Well, enjoy it as much as you can by just looking at pictures and not actually eating it!)

On our first evening in Germany, we made fettucine alfredo with chicken for Kat and Holger. We made a Caesar salad, too, with homemade croutons (by Kat!). For dessert? Black Forest cherry cake. YUM. 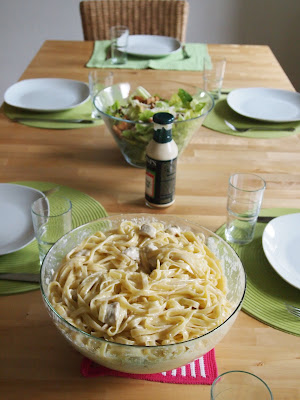 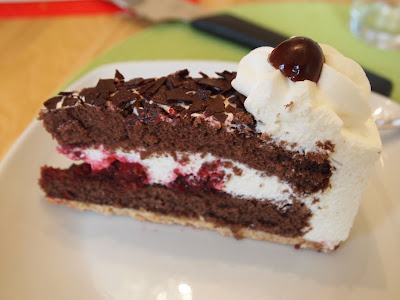 One day, we ate lunch at this lovely cafe. This was the place where the kitchen crew was listening to a Supertramp marathon. 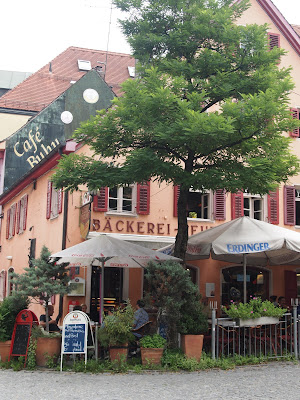 This steak and fries was the older boy’s lunch choice. (YUM.) You may notice that there is some bacon on top. Oops. We don’t eat pork for religious reasons but are not so observant that we don’t make adjustments (without sending food back) if needed. He just pushed the bacon to the side. 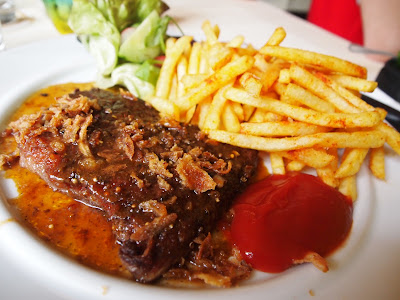 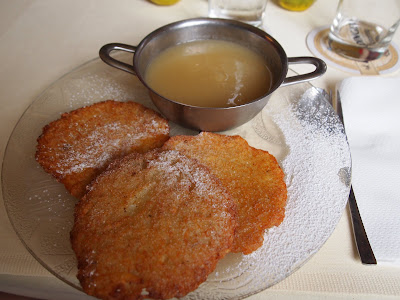 The day we visited Rothenburg ob der Tauber, we enjoyed lunch at a sidewalk cafe. 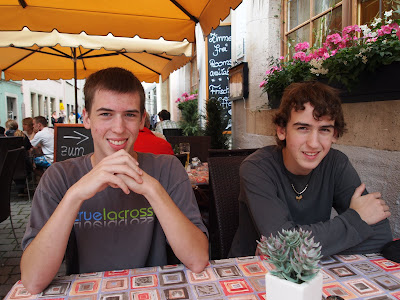 What a cute couple! 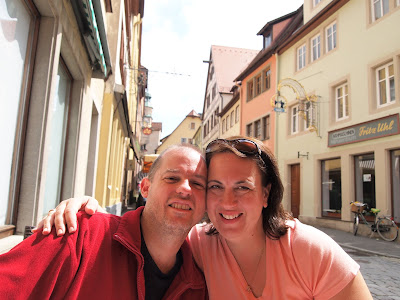 Let’s look at the menu… 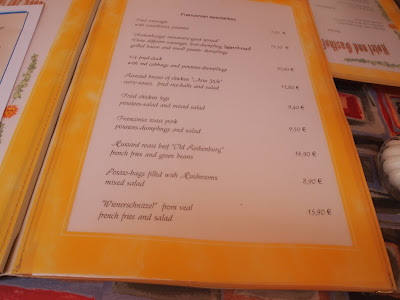 One of the thrilling parts of this trip was Wiener Schnitzel, I kid you not. When I was in Dresden, Germany in 2006 with Kate, I didn’t find Wiener Schnitzel ANYWHERE. It’s not a dish that is a specialty of that area, I guess. Being in Munich, you’re pretty close to Austria, and Wiener Schnitzel (Viennese Schnitzel) is a traditional dish there, so I hit the jackpot on this trip. Would you just look at this? YUM. 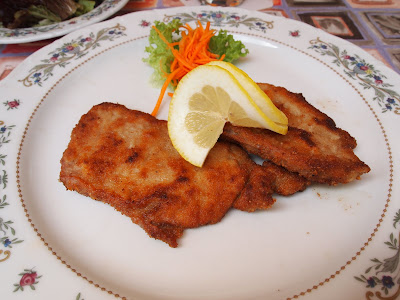 The older boy had a cheese omelet with potatoes. Why? No idea. But he enjoyed it. 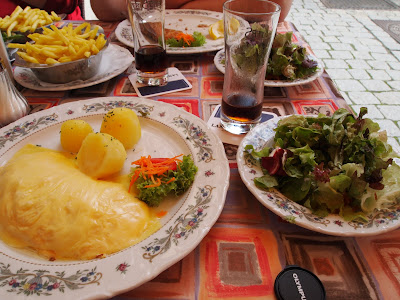 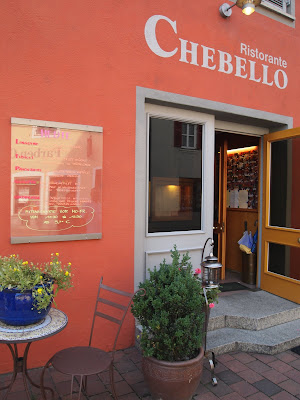 We enjoyed some of the best margherita pizza I’ve ever tasted. 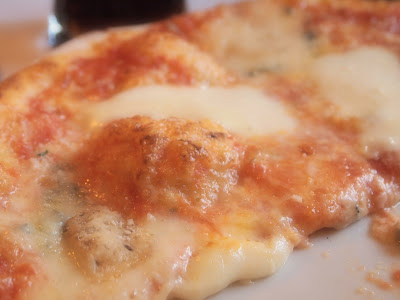 On top of the Zugspitze? Lunch! 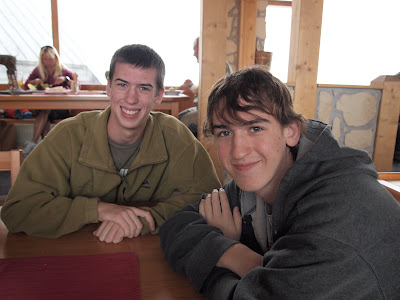 We started with a bread and cheese platter. Yes, it had lots of lettuce on the plate, too. You can see the cheese behind the lettuce if you look carefully. 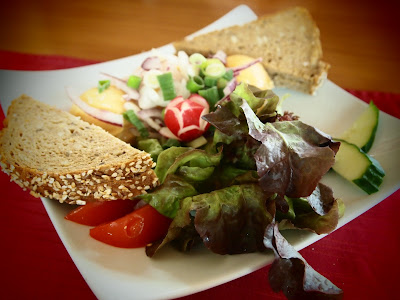 And then? Surprise! More Wiener Schnitzel! 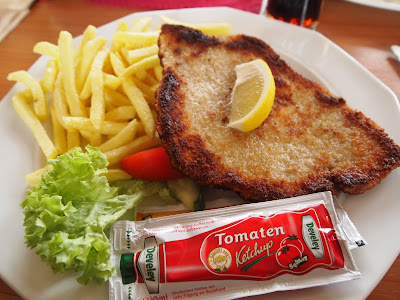 In Füssen, we found a lovely little restaurant for dinner. I ordered this “steak skillet”, which was made up of three different “steaks”, along with delicious vegetables. But oops: the “steaks” were beef, veal (young beef), and–though the menu didn’t indicate this so I could avoid ordering it–pork. Just a speedbump: I ate two bites of the pork before I realized it was pork, then just filled up on the rest of the food, pushing that aside. 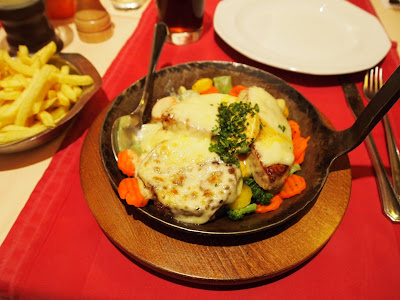 This next place will look pretty familiar to you… 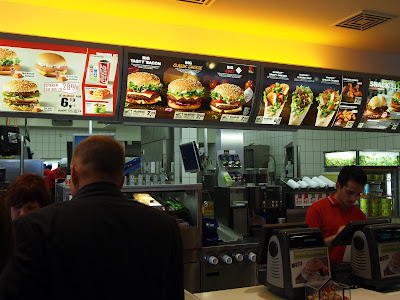 You can get beer at the German McDonald’s restaurants, and their main burger is a Hamburger TS Royal mit Käse (a Royal with Cheese). It’s just as good (so are the fries) as it is in the States. 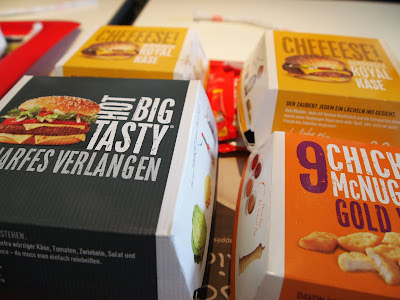 The McDonald’s restaurants in Germany are also making the McCafe more than a logo on a coffee cup: they have a McCafe dessert counter, separate from where you order your burgers! Jim bought a slice of cheesecake. At McDonald’s. 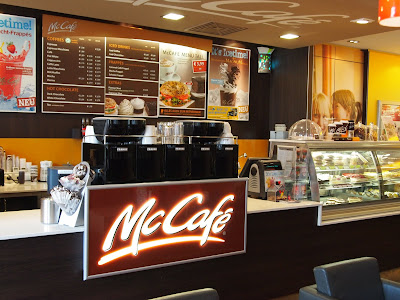 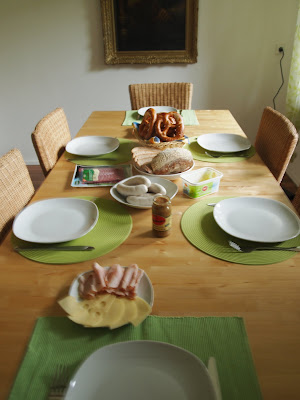 I thought it would be very difficult to be a non-pork eater in Bavaria, which is pretty much the sausage capital of the world, but it wasn’t hard at all. With the bit of flexibility my family has, along with effort on our part to try lots of different things, it was all good in the hood!

Sometimes you just have to have fruit. The younger boy bought an apple at the Viktualienmarkt, Munich’s glorious farmer’s market. I love this picture. 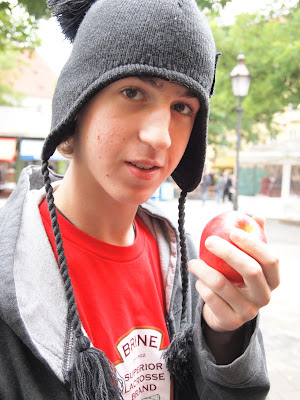 For lunch that same day, we ate at the Viktualienmarkt (yes, we were still there!), at a chain called Nordsee. We had fish and chips. YUM. 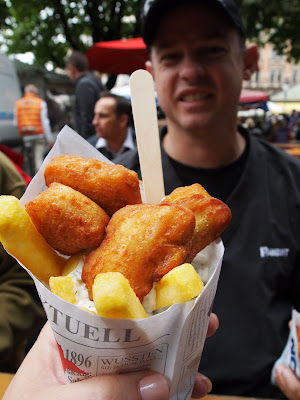 Kat and Holger took us to a restaurant in the next village over, where they are regular diners. The older boy had–what else?–Wiener Schnitzel. I wish I had taken a “before” picture, because it was literally almost the size of his dinner plate. He couldn’t finish it all, and got it wrapped. I called this to-go wrapping his “meat basket”. Guess you had to be there. 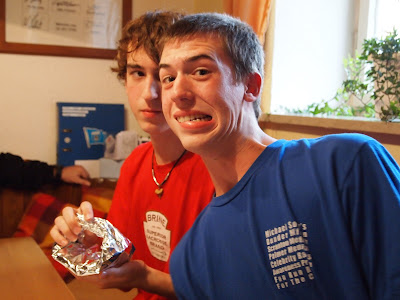 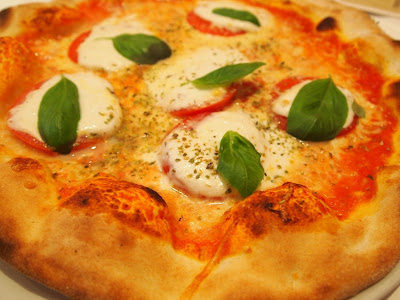 The younger boy went with the Margherita pizza. YUM. 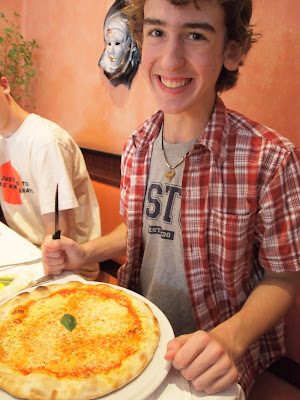 On our final night at Kat and Holger’s before returning home, we wanted to have an American barbecue, and that’s what we did. Jim was the Grill Master of the evening. 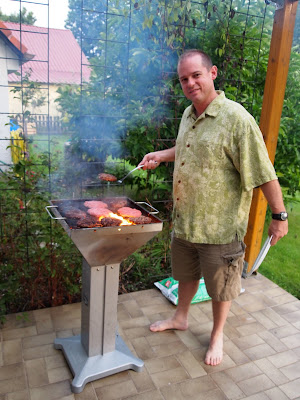 We had burgers, potato salad, chips (even though Holger “couldn’t” eat the chips because he said in Germany you NEVER have chips as part of a meal: they’re always a snack!), and more Caesar salad with Kat’s homemade croutons. YUM. 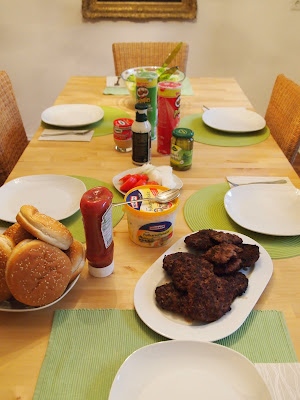 So there you have it, a little food tour of our Germany trip! And guess what? Looking at pictures is calorie-free!

*And by “They”, I mean Kat, Holger, the Germans, the Italians, and Jim the Grill Master.

Next post: We Even Went to Church in Germany…Sort Of.