So These Four Jews Go To Germany…

While on our wonderful family vacation in Germany, we had three Jewish experiences (two were planned; one was not) which I thought deserved mention in their own post.

We first visited the Dachau Concentration Camp Memorial Site, which is completely different from saying that we visited Dachau. When the four of us were leaving Kat and Holger’s house to make the visit there, they made sure to tell us that though the area is known for this horrible piece of the Holocaust, the town of Dachau is a lovely place and we should make sure to visit the Altstadt there, since we’d be in the area. (Check out the website for the city of Dachau here.)

Their telling us that stuck with me ever since that morning, because I think it speaks to what Germany as a nation has been trying to deal with since World War II. The Holocaust was an indescribably horrific event in history and should never be forgotten, but the Holocaust THEN is not what Germany is TODAY.

The presence of reminders (the concentration camp sites), is a good thing, because the circumstances that led to the brutal murders of somewhere around eleven million people (six million were Jewish, but five million were killed because they were gay, handicapped, unionists, or one of many nationalities deemed unacceptable by Nazis) will hopefully never be repeated.

On a side note, I was recently asked by a fellow Jewish person, upon learning where we went for vacation, “So, why would you go to Germany?” (Are you kidding me?)

I’m probably not expressing myself about this very well, but I guess I can just summarize the best that I can by saying that it’s important to learn from past events in order to make a better future. Germany as a nation has moved forward, not by getting rid of any reminders of the Holocaust, but BY keeping the reminders around and moving forward around them.

Our visit to the memorial site was, naturally, a somber one. Going to pay respects at a place like that isn’t something you do for fun, but we felt it necessary to go and learn a little more about that moment in history. Though there were hundreds of people visiting when we were there, it was mostly quiet, except for the voices of tour guides leading their groups around the different areas of the camp. It was eerie, creepy, and sad to be there, and it all started when we entered the front gate, which had the slogan “Arbeit Macht Frei” (“Work makes you free”) on it. 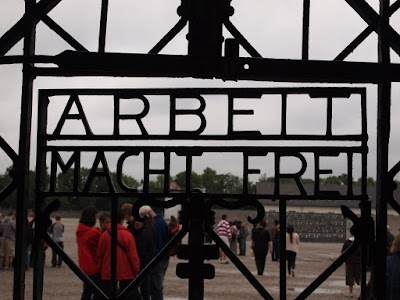 Walking through the buildings, whose windows still have bars on them, was a little disturbing. 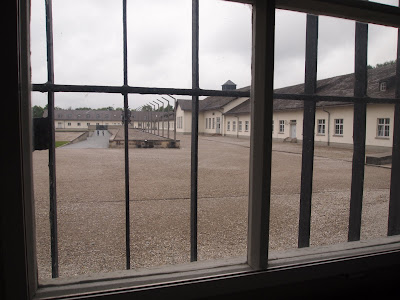 Scattered throughout the rooms were pictures on glass (you can see it in the right forefront) from the Holocaust, so you could see the rooms as they looked back then. The pictures were set up in the approximate spot where they were originally taken. Looking at the now-empty-except-for-exhibit-materials rooms in this way and imagining what they were like back then gave me chills. 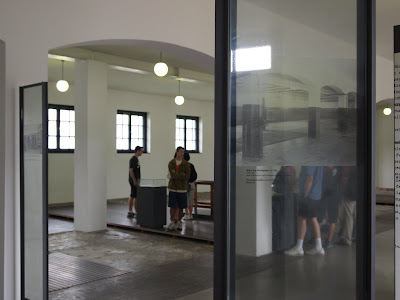 We walked through one of the barracks and got to see how crowded the sleeping quarters were. 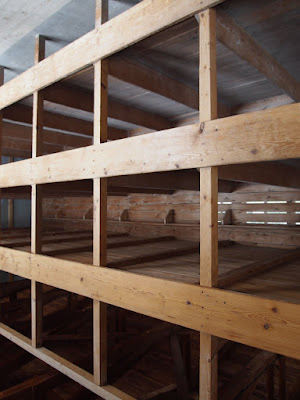 Outside on the grounds, there were several memorials; naturally the one that spoke to us the strongest was the Jewish Memorial. It was built so visitors walk down into it; it’s six feet underground. The only light inside comes from one little opening, through which you can see the menorah that sits on top of the building. It was a very moving experience to go inside. 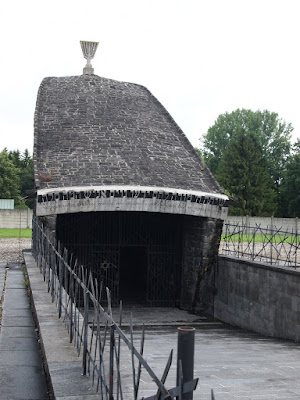 You can read more about this memorial, if you’re interested, by clicking here. 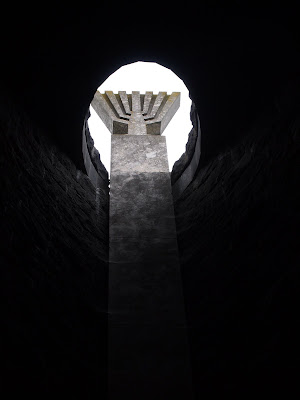 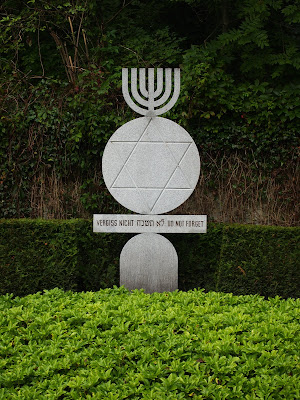 The other planned Jewish “experience” we had on our schedule was visiting the Jewish Museum in downtown Munich. Located on St. Jakob’s Platz, the museum is right next door to the new (2006) temple, Ohel Jakob, which is totally gorgeous outside. We would have loved to see the inside, but it was closed. (I even contacted them a while back to see if we could attend Shabbat services there, but August is their vacation month and they weren’t having them!) 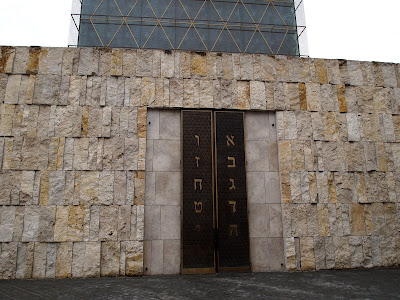 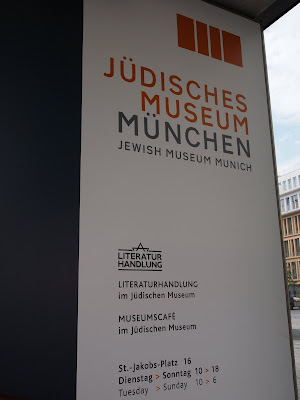 The Jewish Museum, to be completely honest, was–unanimously–our least favorite part of the entire trip, so I won’t spend much time on it. It is relatively new, having opened in 2007, and is made up of three floors. The bottom floor is where the permanent exhibition is, and it was S-M-A-L-L. The second and third floors contained temporary exhibits, which during our visit were mostly photographs and videos that were S-T-R-A-N-G-E. It reminded us of Sprockets on “Saturday Night Live”, and that’s all I’m going to say about that.

The other Jewish experience we had was a total surprise. It happened at the Audi Museum Mobile. We were exploring their temporary exhibit, “Farbverlauf” (gradient), which was made up of twelve cars, each a different color. Behind the cars on the wall were pieces of metal which were painted in different shades of that color. It was quite beautiful, see? 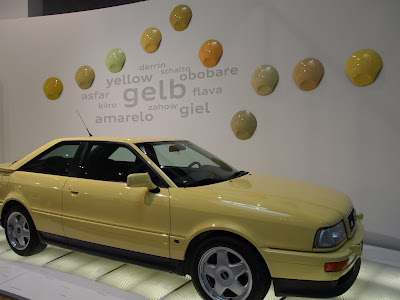 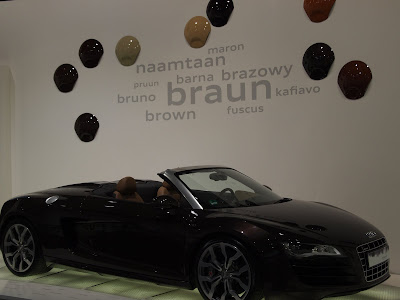 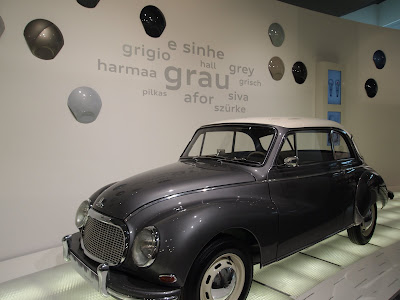 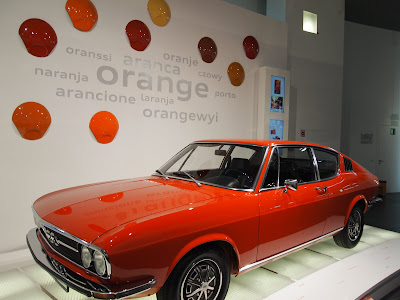 In each color section, there were also video screens that were slowing flashing various items in that color. Blue: blueberries, Cookie Monster, a butterfly… 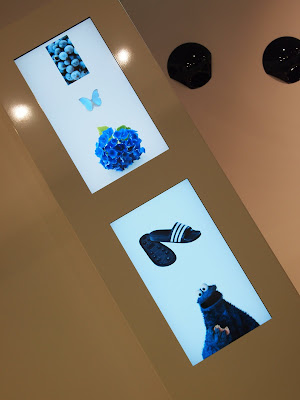 Green: an emerald, a disco ball, the Incredible Hulk… 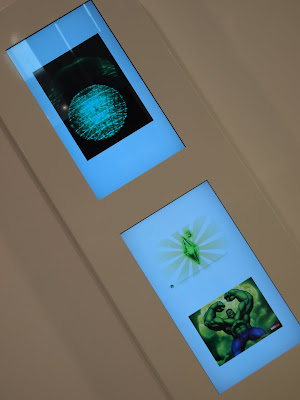 I was watching one of the screens when the younger boy came over to me and grabbed my arm. “Uh mom? You need to see this: come over here to yellow!”

I followed him over and watched the screens. Yellow: a tennis ball, a bumblebee, a rubber ducky, a sponge, Homer Simpson…

…the yellow star used to label Jews during the Holocaust…. 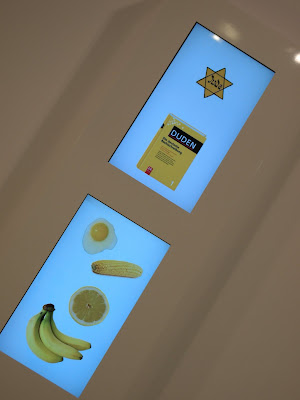 THE YELLOW STAR USED TO LABEL JEWS DURING THE HOLOCAUST was a part of an Audi exhibit about the use of color in automobiles?

I was blown away. BLOWN AWAY. Horrified.
I didn’t understand why it was there, in between Homer Simpson and a bunch of bananas.

We told the older boy, Jim, and Kat and Holger about it, and none of us could wrap our heads around why it was there. I resolved to send a note to the museum upon returning to the States, and that’s what I did:

My family and I were visiting Germany from Chicago this week and explored the fantastic Audi Museum Mobile in Ingolstadt on Wednesday. The museum was very enjoyable, but I have a question about the “Farbverlauf” exhibit because something distressed me very much.

On the wall next to each color display, video screens showed pictures of things that represented lots of different shades of each color. In the “yellow” section, there were pictures of a smiley face, bananas, Homer Simpson, corn…and the thing that was very disturbing to me: a picture of the yellow star that was used to mark Jews during one of the darkest periods in history, the Holocaust. It was a shock to see this, to be sure.

My family and I are Jewish but our German hosts are not and they were disturbed by it as well. I am just wondering if you can explain to me why this was included, as there are so many other things in the world that are the color yellow: why include something as negative as this? I have been thinking about it very much, trying to come to a conclusion that would make sense to put this yellow star in the exhibit, but so far cannot come up with anything. Unfortunately this put a little damper on the end of our visit to the Audi Museum…

We returned home on Thursday, August 19 and I sent that e-mail over the weekend. On Wednesday I had an answer from a museum representative that knocked my socks off.

Dear Melisa,
Thank you very much for your letter and your remark concerning our exhibition „Farbverlauf“ in the Audi museum mobile. We are very sorry to have wounded your emotions by using this sign. We deeply apologize for this presentation.

Among other aspects, the intention of our exhibit is to demonstrate the effects of colours upon the human being – colour symbols may cause different reactions. Looking at all shown symbols again and alerted by your remark, we have decided immediately to remove this historical sign from the exhibit.

If you please give us your post office address, we would allow us to hand over to you, as a little present, our company’s history book „Four Rings – The history of Audi“.

We would very much appreciate to welcome you again in our museum mobile.

Yours very sincerely, The Nice Man at the Museum (I took his name out)

This reply was so kind and so much more than I expected. All I asked for was an explanation; the removal of the symbol from the exhibit–which, I’ve learned since returning home, OPENED the day we visited–not to mention the book he is sending us was a super-awesome bonus. It turned the bad taste in my mouth from that experience into a good one, and makes me feel empowered to act again, the next time something that I believe is wrong happens. It’s a good feeling.

Tagged as: Foreign Fetish, Germany, Ick with a Capital I, WTH?

Next post: CheerFULL, ResourceFULL, and ThankFULL at Hallmark’s Christmas in August Event, NYC 2010