Shop Til You Stop!

Naturally, part of any vacation is finding cool places to shop and buy souvenirs. We were actually pretty controlled on the spending while in Europe, probably buying waaaay less than the average tourist. But browsing was still fun.

We bought lots of postcards to send to Julesie (she collects them) and for the older boy to send to his girlfriend. 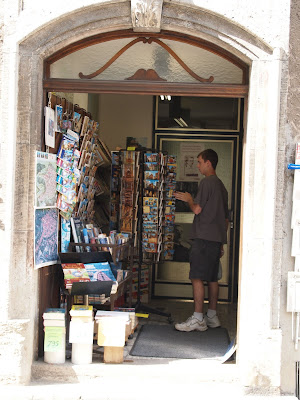 In downtown Munich, we found this totally cool store called Kare. If money was no object and my luggage weight didn’t matter, I could’ve spent hours (and hundreds of Euros) in there. I loved it! I’ll let the pictures tell the story of how fun this place is. 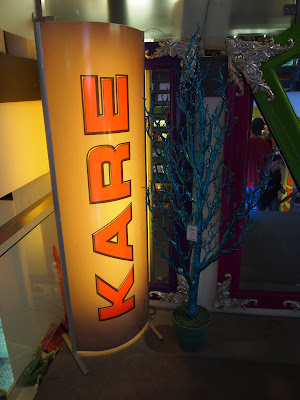 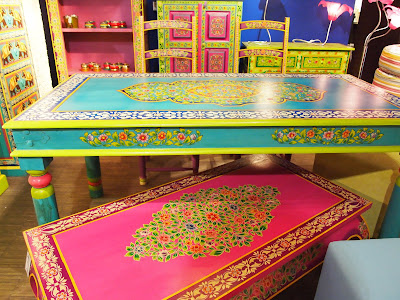 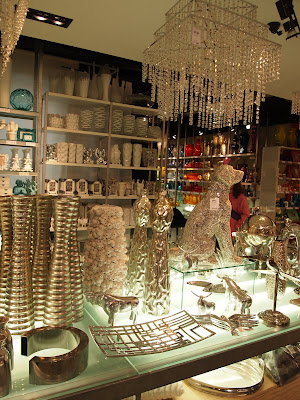 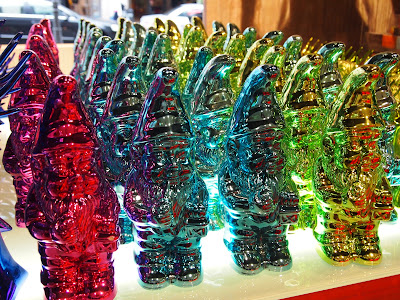 This picture was also taken at Kare, when I told the older boy I found the perfect accessory for his dorm room. He loved it. Alas, we couldn’t drag that thing home, and I’m pretty sure the letters were a little sparkly for his true design tastes. But it made a great photo, don’t you think? 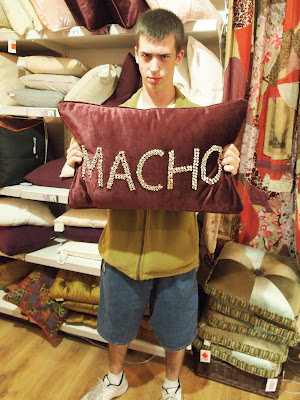 The younger boy found a new hat on this trip. He wore it almost constantly once we shelled out the Euros for it. (and yes, he DID remove the price tag once we left the store.) 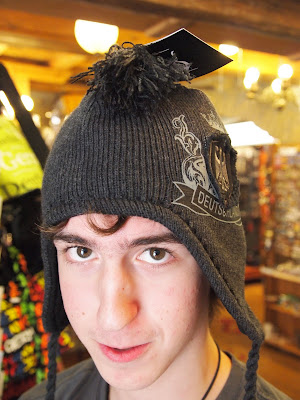 When you travel to Germany, you can find beer steins everywhere. Of course, *these* are the cheap, made in other countries kind. 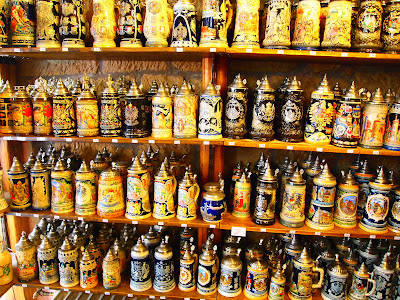 In Rothenburg, we happened upon a small shop in which the shopkeeper talked to Jim for about 45 minutes about the history of the beer stein and why the cheap knockoffs are, well, cheap knockoffs. He explained that a real beer stein is made of STONE (hmm, “Stein” is the German word for….guess what? STONE.), which has a custom-fitted (to that individual stein) pewter lid. 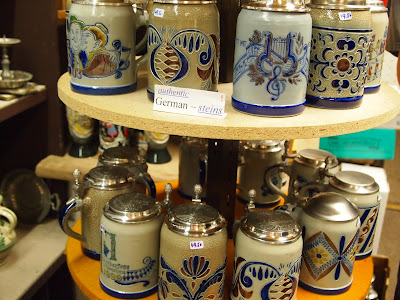 Sold! Jim bought one. The shop owner was lovely, telling us story after story, and even walked with us to the sidewalk, to say goodbye. I wanted to take a picture of him, but developed a sudden case of shyness and “Oh gosh, what if he thinks I’m some kind of freak?” disease. Thinking back on it, he probably would’ve loved it. Oh well…

I loved seeing dirndls and lederhosen in the shop windows. These outfits are the traditional way to dress in Bavaria. We saw lots of men wearing lederhosen (leather pants…but not like you’re thinking!) around town, but not so many women. Kat told me that Sundays are a big day for wearing this kind of stuff. I just think they’re pretty. 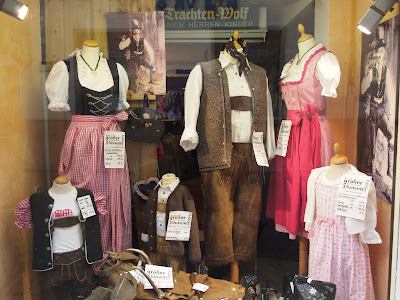 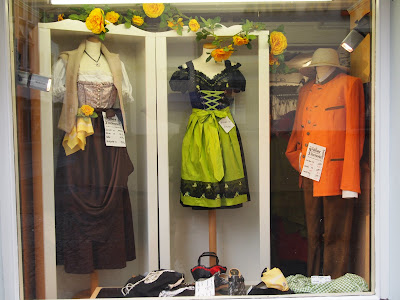 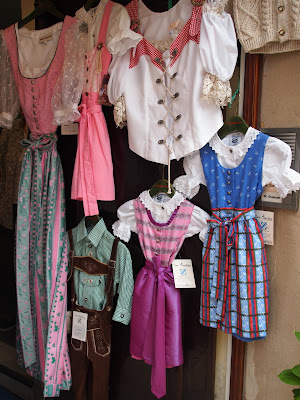 The Viktualienmarkt was one of the things I didn’t want to miss while in Munich; I had seen it on lots of travel shows, and it didn’t disappoint. Kat said, “You know it’s just a farmer’s market, right?”

Well, it’s a GLORIOUS farmer’s market. So much fun. 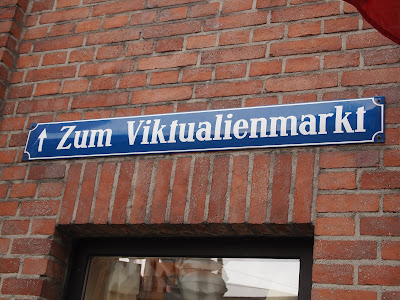 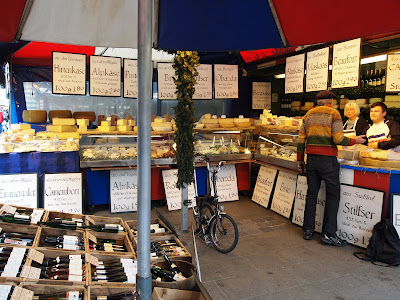 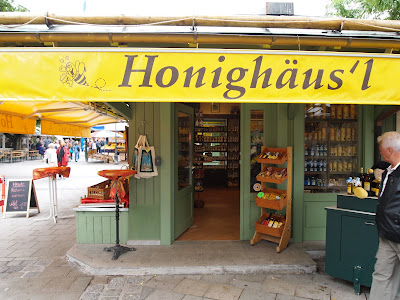 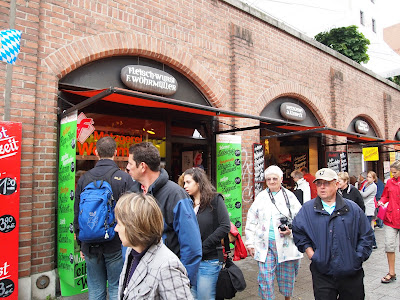 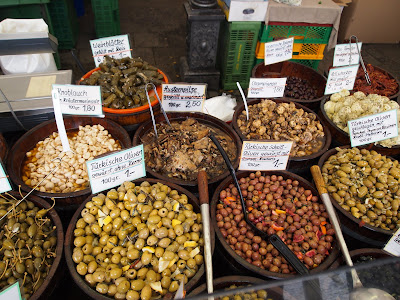 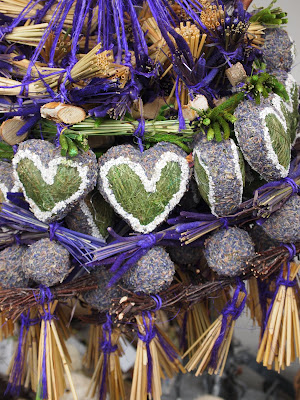 Yeah…and all kinds of other stuff. 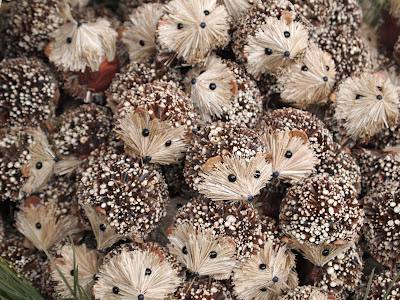 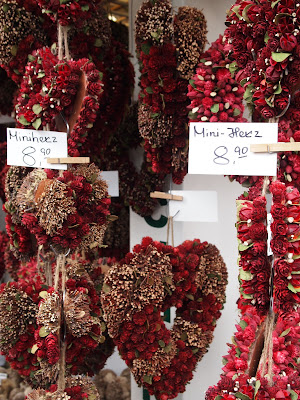 We bought some small items, tried a few samples, and ate lunch there. It was great fun.

Something else that we saw all over the place were….these. 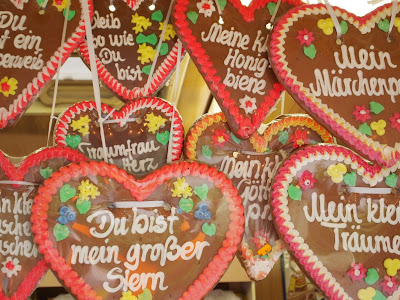 I think they’re fabulous. I don’t know how they taste, but they sure are pretty. Most of the ones we found near the beginning of our trip said things like “Greetings from Munich”, “I love you”, and other generic things like that, in German of course. On the day before we left, we came upon a street festival in Ingolstadt where the ones in the above photo were being sold. The variety this little booth offered was tremendous, and I decided to find one for Julesie, because how fun would that be?

I found one that said “Zucker Stück”, which, literally translated, means “Sugar Piece”. I said to Holger, Kat’s hubby, “So I can translate this to say ‘Sweet Piece’, right?”

He looked at me blankly for a moment and then nodded. “Pretty much.”

Sold! I thought my sister would think that was hysterical, and I was right (of course). She loved it!

I’ve said it a bunch of times here on the Scrawl: MY favorite souvenirs are the photographs I take. I stuck to that pretty tightly on this trip; though I looked for things to purchase as mementos, I only found a small flowered tablecloth to bring home, except for one other thing, which has an interesting story.

My main souvenir from this trip is actually a souvenir from my last trip to Germany, too. When I was in Dresden I discovered that the little man in the “Walk/Don’t Walk” signal lights was different from anything I had ever seen before. Here’s a picture I took on that trip, with my Camedia C-60: 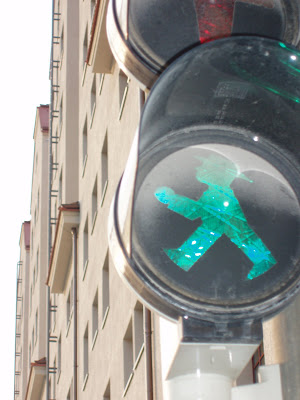 Isn’t he adorable? I learned that the Ampelmann, which was an East German symbol, was supposed to be eradicated after Germany was unified in 1990, but East Germans protested because they wanted to keep him and not have traffic lights like everybody else. (Full story: HERE.) I love the history of it and I think the symbol is so cute. When I was in Dresden I didn’t get a t-shirt or anything with Ampelmann on it, and totally regretted it. I even went as far as to look up some t-shirts on German eBay, but didn’t want to spend that much.

When I found a store in Rothenburg (a Japanese store, nonetheless!) that had an entire section devoted to Ampelmann, I was in heaven. I picked up a magnet and this bag, which now holds my makeup. 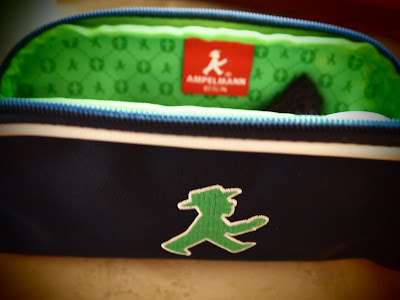 It’s a special souvenir because not only does it remind me of my last trip to Germany, but this one too: Kat originally hails from East Germany! (Score!)

I wish I could have this much fun shopping in the States. Or maybe that’s not such a good idea after all.