On Crazy Kings and Reenactments

While in Germany we spent an entire day (the day after going to the Zugspitze) taking in three of the dreamy castles of King Ludwig II. We started in Füssen, at Schloss Hohenschwangau, which was originally the home of Ludwig II’s parents, and then became his when they died. I didn’t get a really great picture of the entire castle, probably because I wasn’t flying over it in a helicopter, but you’ll get the idea. 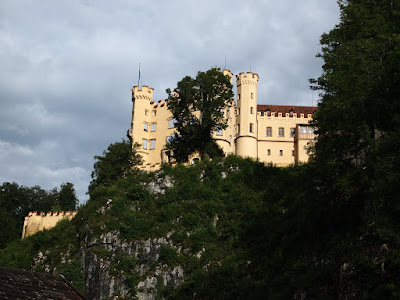 I took a few pictures outside on the grounds, because unfortunately you can’t take pictures inside any of the castles, with a couple of exceptions (I’ll get to one in a minute). 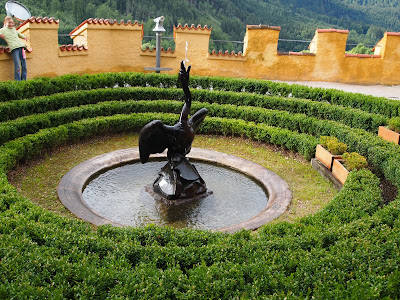 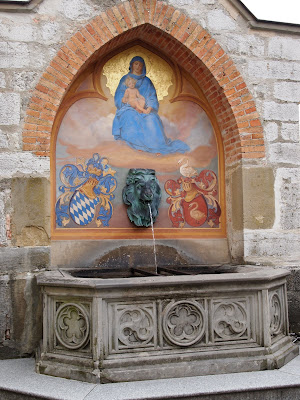 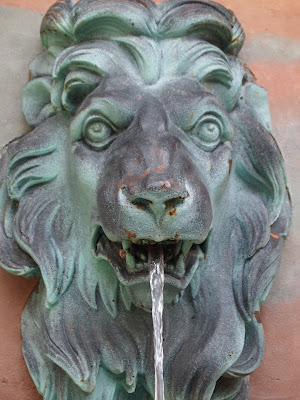 We only had to look into the distance to see our next stop, Schloss Neuschwanstein. Ludwig II had this castle built for himself, just a hop, skip, and a jump away from his parents’ place. Known to Americans as the inspiration for Walt Disney’s Cinderella Castle, (EDITED: A-HA! Tom was right, in the comments. Neuschwanstein was the inspiration for the Sleeping Beauty Castle at Disneyland. I never knew that: thought both castles in both parks were the same, Cinderella’s castles. Don’t shoot me.) Neuschwanstein was intended to be a vacation spot for Ludwig II, and it paid homage to Richard Wagner, his favorite composer (and a good friend). 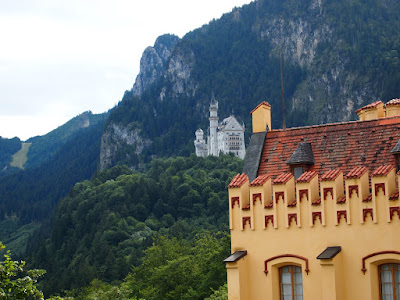 Again, no pictures inside, with two exceptions. Here was Ludwig II’s view of nearby village, 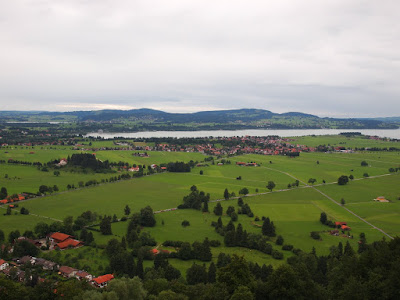 and here was his view of his parents’ castle, Hohenschwangau. 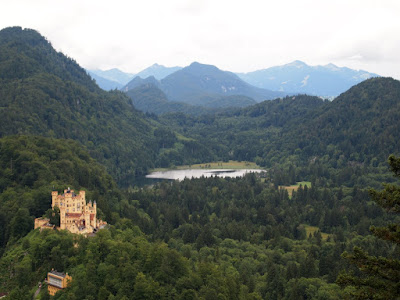 It was a 45-minute walk (there was a bus and a horse/carriage option but we passed) from Hohenschwangau to Neuschwanstein, and we weren’t done there. The best views of the castle were from the Marienbrücke (Mary’s Bridge), which was thirty minutes on the other side of Neuschwanstein. The bridge hovers over a huge gorge over a beautiful waterfall, and was a little nervewracking to stand on because of the hundreds of other tourists who were jockeying for the ideal photo-taking position. Jim opted out and stayed to the side, but the boys and I made our way to the center and were handsomely rewarded with a view that was to-die-for (but thank goodness we didn’t!). 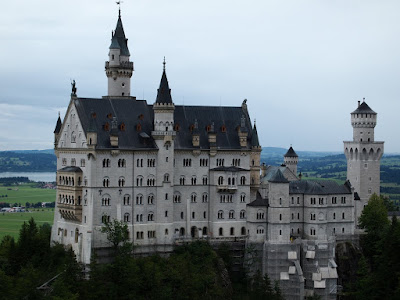 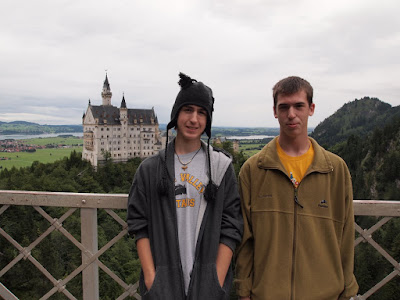 Next stop? Schloss Linderhof. I visited Linderhof on my first trip to Germany in 1983, and I have always remembered how beautiful it was. I was hoping we could make time to take the detour there on the way back to Munich, and indeed we did.

Because it was already three in the afternoon and the lines were crazy, we opted out of taking the tour on the inside of the palace and just walked around the beautifully manicured grounds. (That was really what I wanted to see, anyway!) After being at the massive Neuschwanstein and Hohenschwangau all morning, Linderhof (inspired by the palace at Versailles) looked like it was in miniature. Indeed, it was Ludwig II’s smallest castle. 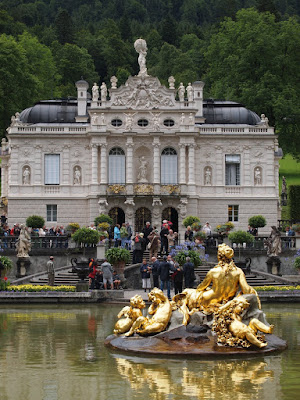 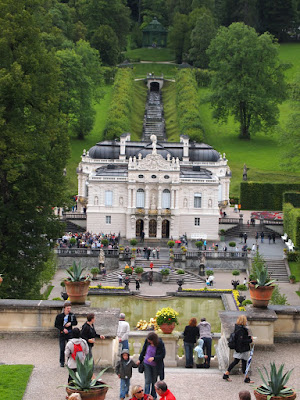 I took tons of pictures here. The “front yard” of the palace extends way out, and you can go up the steps to have an even better view, which I’ll get to in a moment. 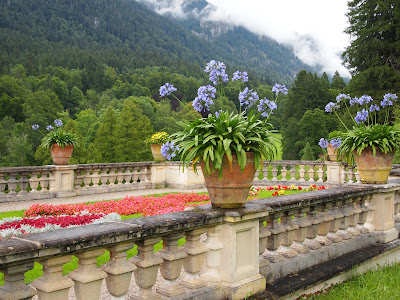 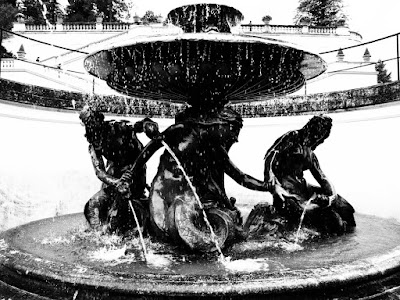 Here’s what you see when you look at the grounds from the palace. 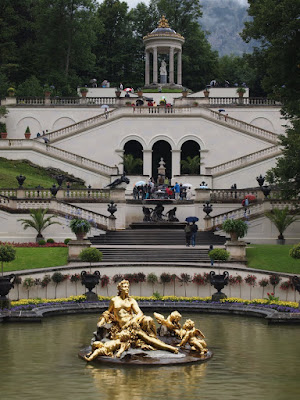 Black and white, grainy lens, anyone? (Love this one!) 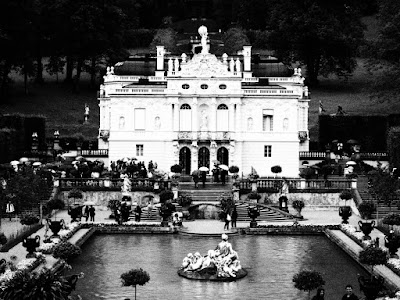 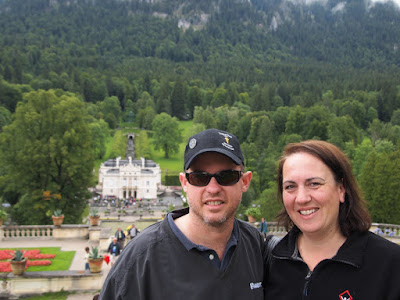 One of the things I really wanted to do was recreate a picture that was taken back in 1983. It’s one of my favorite pictures of all time, and at the time I didn’t even know anyone was capturing the moment. Tina, the girl I stayed with in Germany for the month that summer, and I were sitting at the very top, hanging out and watching what was going on beneath us. As I recall, we had just finished some potato chips. I’m glad they didn’t make it into the shot! Tina is on the left, and I’m on the right. (and yes, that IS a Panama Jack t-shirt. I wore that thing OUT!) By the way, Tina’s dad took the picture. 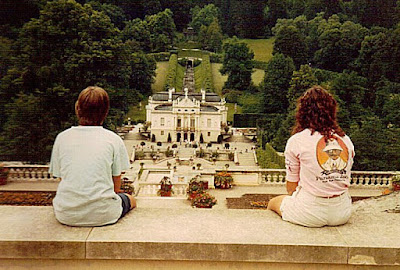 It was a little drizzly, and it wasn’t like my boys were going to just hang out in that exact spot, so I asked them to sit there, and they obliged. Pretty cool reenactment; one of the things I noticed first was that the crowds are much heavier these days than they were in 1983! 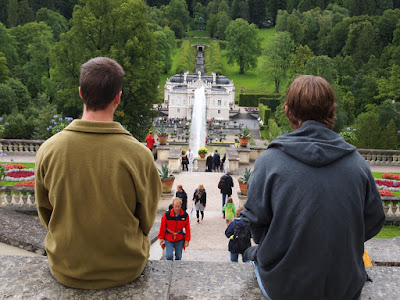 That’s a pretty good place to end for now, don’t you think?

And guess what? One more post and then we will have completed my retelling of our family vacation! You’ve almost made it!

Next post: Random Thoughts and Pictures: German Style (Or, “I Guess It’ll Have To Go Here”)