Apparently I Should Be Eating More Marshmallows.

You might be surprised at what I have chosen to write about today. On second thought, you might not.

In spite of the castles, the Alps, the colorful town squares in the Altstadts of Bavaria, and all of the other local flavor we experienced, what I’ve decided to tell you about first are…

Let me back up a bit. Some of you new readers may not know the extent of my foreign fetish: you can read about why foreigners make me giddy by clicking here.

Anyway, I let Kat know ahead of time that I definitely wanted to hit the grocery store on the first day, not only so I could check it out but also because we wanted to make dinner for her and Holger once or twice while we were there.

You probably won’t be too surprised that German grocery stores look pretty similar to American ones, inside and out. I took photos at a couple of stores, but for the purpose of this post, I won’t indicate which photos come from which store, because it really doesn’t matter. Anyway, here’s the outside of one, Kaufland. (The word “kaufen” in German means “to buy”, by the way.) 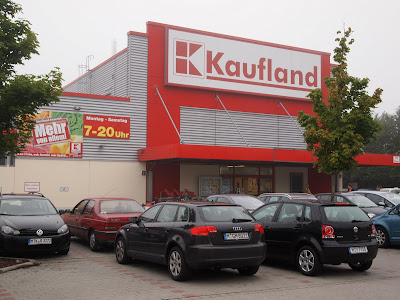 The produce section is pretty much like ours (signs indicate prices in Euros, of course), except that in Germany people still have to weigh their produce before going to the register, like we used to do here years ago. 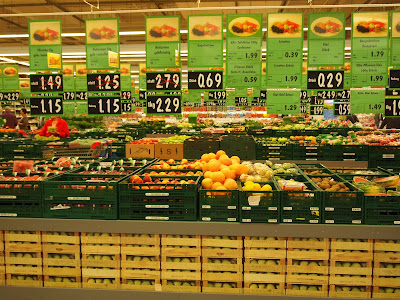 The seafood section is usually pretty extensive over there. I enjoyed the graphics on the wall; they made me feel like the seafood here is fresh out of the water! Our stores should do this. 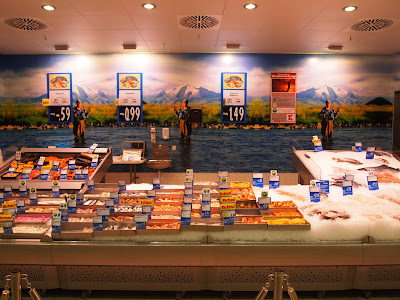 Part of the bakery department is shown here. Germany has tons of bakeries all over the place: there is never a shortage of carb goodness when you travel over there! 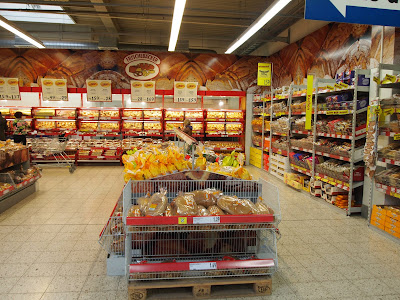 We loved finding references to America in the store. Here are American Buns, for hamburgers. (We bought some for our barbecue!) 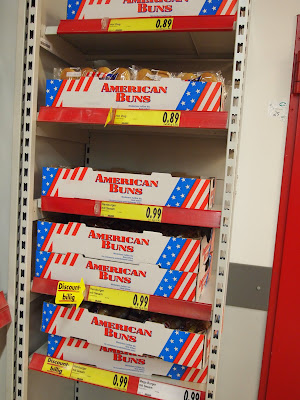 We also found “Cool American” Doritos, which I assume are our Cool Ranch flavor because of the color of the packaging. 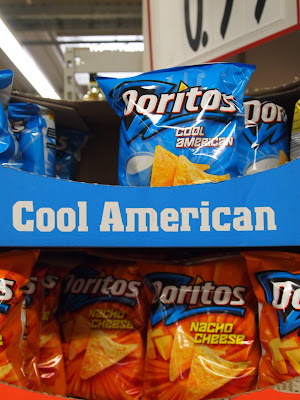 One of my favorite sections in American grocery stores is the International food aisle. I was thrilled to hear from Kat that German stores have American sections, and I wanted to see what products were included there. Honestly, it made me laugh and think twice about the featured products in OUR International food sections. I’m curious to know now if the German section at my grocery store here is as stereotypically-based as their American section. In the American section over there, some of the featured products include microwave popcorn, Betty Crocker cake mixes and frosting, Arm & Hammer baking soda, Swiss Miss (haha) instant cocoa, Cardini’s salad dressings, Jim Beam condiments, Campbell’s soups, generic Cheese Whiz, macaroni and cheese, and jalapeno cheese sauce, Hunt’s Barbecue Sauce, and marshmallows. Oh, the marshmallows. 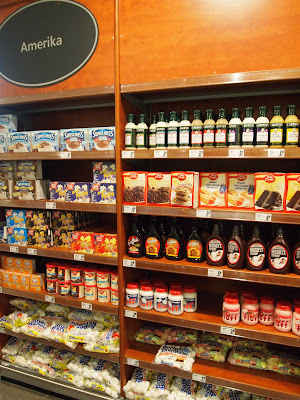 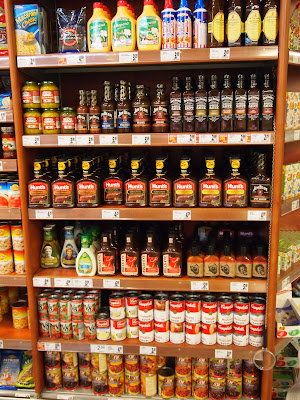 I mean, really. LOOK at all those bags of marshmallows!

They also had Fluff in plain and strawberry. STRAWBERRY. I have never seen that in my life!!

After I recovered from the shock of discovering that Germans apparently think that Americans are hot-sauce-covered-marshmallow lovers, we headed over to the candy aisle so I could stock up on chocolate and gummy bears (okay, cookies too!). Although I can buy Haribo gummy bears here, they come in only two or three varieties. It’s quite different over there. 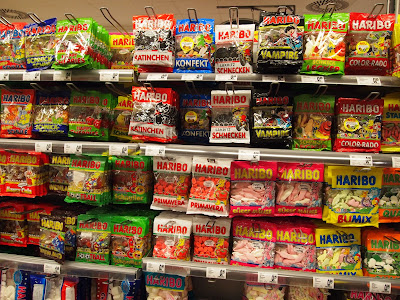 The older boy was with Kat and me on this shopping trip, and as we filled our cart with sugar-based products, I was dreading facing the cashier. It was pretty embarrassing to load up the conveyor belt, that’s for sure! 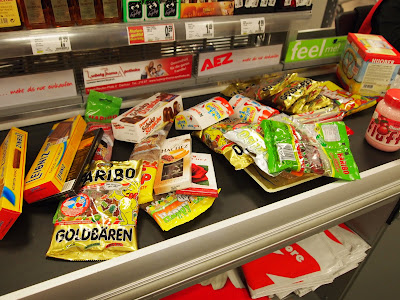 Thank goodness there was no judging on the part of the cashier. I gave her my 64 Euros (Hey! Calm down! We had some dinner items in there too…only about 40 Euros was on junk. And yes, I DO realize that’s about $55 worth. Shut up.)

After we paid and got ready to leave, we took our cart over to the moving sidewalk, which safely and smoothly took us to the lower level. The store is on the top floor of the building and this is their genius solution for getting the groceries to the car without stairs or an elevator. As the older boy said quite often on the trip, you’ve gotta love German engineering! 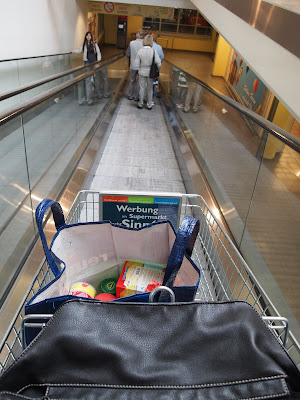 I’m off to the grocery store in a few minutes for our post-vacation stock-up trip, which is sure to cost me more than 64 Euros. I might also pick up some marshmallows.