Above God And Everybody

A visit to Bavaria wouldn’t be complete without taking a drive to the Alps. We left Kat and Holger’s house bright and early one morning (okay, truth be told we were actually an hour later getting out than we originally intended…but we were on vacation so it didn’t matter much!) and drove south. Our destination? The Zugspitze, which is the highest point in all of Germany at 2962 meters (9717 feet).

It’s no easy (or quick!) feat to get to what they call “The Top of Germany”*. You have to ride a combination of trains and cable cars, and in total it took us about an hour to get up there. 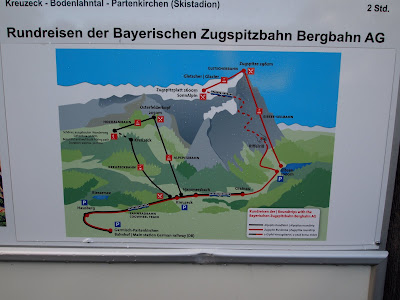 We caught the Zugspitzbahn, which is a cogwheel train, and rode that for a while, passing beautiful vacation homes, green meadows, and gorgeous lakes until the train actually went INTO the mountain for the last part of the journey to our semi-final destination, the stop at Zugspitzplatt. 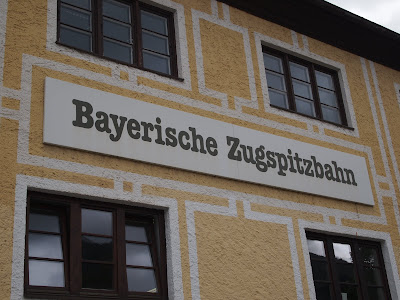 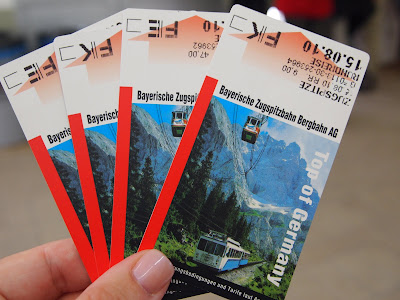 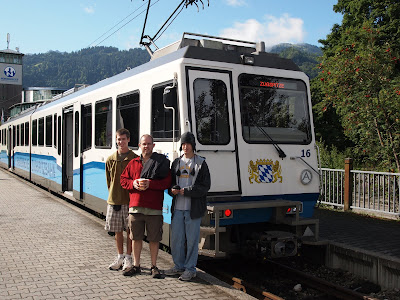 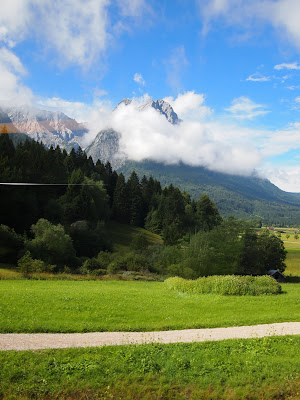 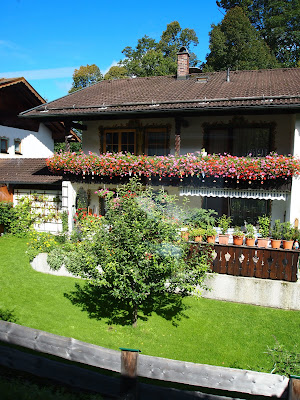 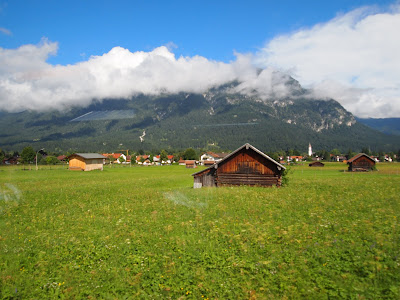 From there we took the Gletscherbahn cable car to the top of the mountain. 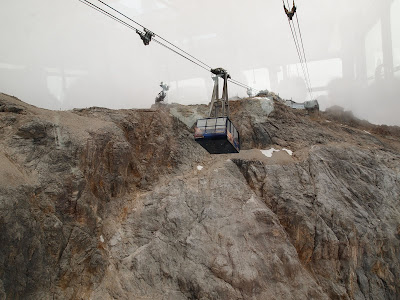 We had been a little concerned about the view we would have from the top, as the weather in Germany since we arrived was intermittently cloudy and rainy, and we were spending a lot of money on a gamble that we’d be able to see anything but clouds while up there, but we had to take the chance as that was *the* day that we planned to visit and couldn’t change it because of a one-night hotel reservation and pre-reserved castle tickets for the following day.

So up we went. The view was amazing from the train and the cable car.

I have to pause the story for a second to tell you that the view inside the train was amazing as well. Look at this photo of Jim, which was taken by the younger boy. I LOVELOVELOVE IT. 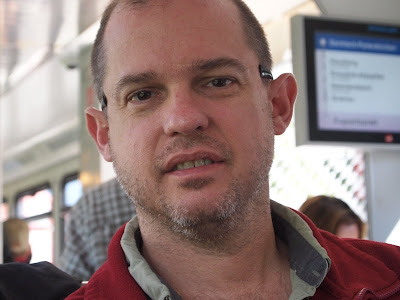 Once we got up to the top there was some cloud cover, but it didn’t seem thick so we thought we’d be okay after a little while. We left the cable car station and decided to go ahead and eat some lunch in the restaurant before heading outside. Upon climbing the steps (seriously, SO MANY STEPS in Germany!!!), the high altitude we were at was now apparent as Jim and I huffed and puffed to the top.

After a great lunch, we headed outside to…the clouds. Oy vey. And it was cold, too. It was two degrees Celsius out there, which is 36 degrees Fahrenheit if you’re wondering. The problem? Jim, the older boy and I only brought shorts (I brought capri pants, too) on the trip. For once, the younger boy–who wears long sleeved shirts and jeans quite often during the summer and gets mercilessly ridiculed by his family for it–was dressed properly for the weather. (Or at least closer than the rest of us!) While the three of us complained about not wearing pants, the younger boy smiled (and neener neenered!) through the windy conditions. 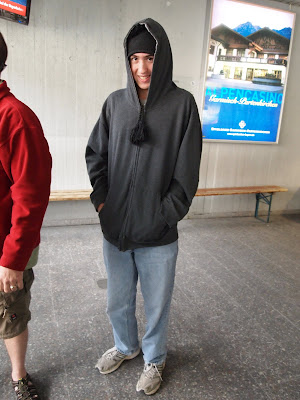 With patience, we were able to watch the clouds being blown around a bit, and were rewarded every now and then–even if only for a minute or two–with a pretty good view, and then the clouds settled back in. We didn’t see as far unto the distance as we could’ve on a clear day, but it could have been way worse, so we were happy. 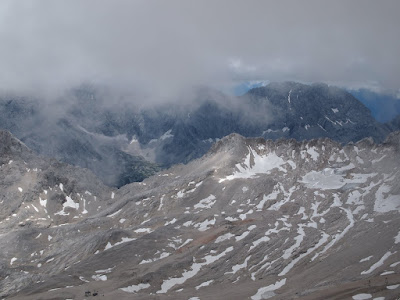 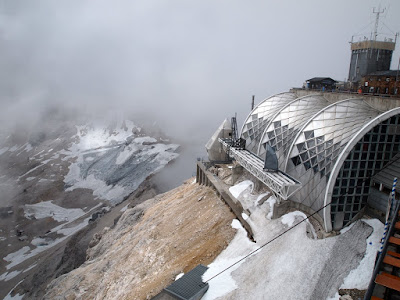 During some of the cloudier moments, I had a photo session with the black birds that were trolling around for scraps to eat. They weren’t much afraid of tourists, I can tell you that! (But there also weren’t any tourists eating any lunch in the Biergarten outside, Germany’s highest!) 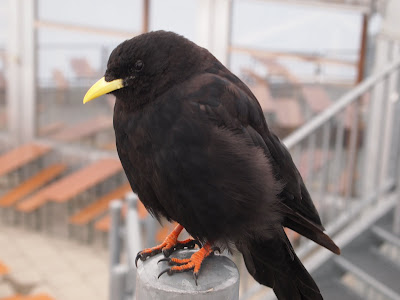 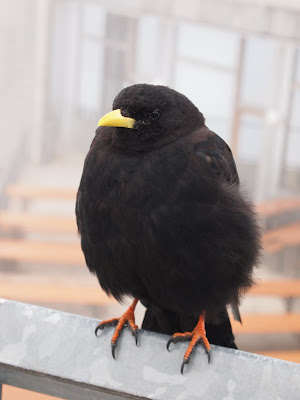 When the clouds parted again, I thought of how my sister once flew, at the age of eight or nine, all by herself**, to see some framily. She wrote us a letter, excitedly telling us how pretty the clouds were and how she was “above God and everybody!” On that day, up on the Zugspitze, I felt the same sense of wonder, clouds and all. 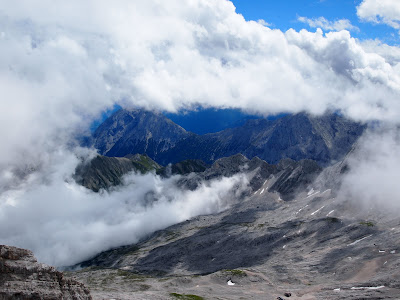 After a while we went in for cocoa, because it was just. that. cold. And then we went back outside for a few more minutes before hitting the souvenir shop and getting ready to head back down the mountain.

The trip down seemed a little more perilous at first glance. We took the Eibsee-Seilbahn, which was a cable car that moved swiftly downward (to the Eibsee trainstation) on a steeper cable than the one we rode up. The cable car was packed, and it was a little nervewracking dropping out of the cloudy sky like we did. Once we broke through the cloud cover towards the top, the whole world seemed to open up for us and it was just gorgeous. 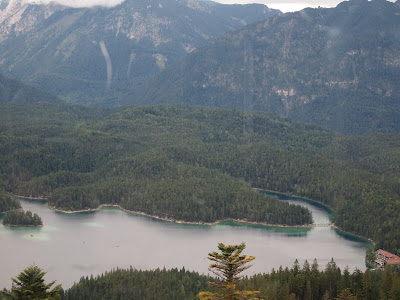 When the cable car made its way over one of the towers and then literally dropped back onto the cable, everyone inside literally gasped in that moment of terror, but then we nervously laughed. I decided to take some video so you can see what the ride was like!

When we arrived in Eibsee, we had to wait for the next train, which didn’t come for another forty-five minutes. It was a minor inconvenience, but we were on vacation with no deadlines, so we went with the flow! 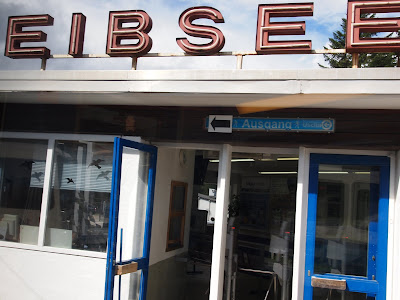 After we made it back to the bottom of the mountain, we got in the car, tired and happy after a wonderful day at the Top of Germany, though energized to continue on our exciting journey!

*It’s not cheap either. But we were on vacation, so that didn’t matter much.
**and on a plane, of course. *snort!*

Next post: Bursting At The Seams, I Had To Put One Elsewhere.

Previous post: Apparently I Should Be Eating More Marshmallows.