You Know How, When You’re Pregnant, It Seems Like Everyone Is Pregnant?

If you’re a regular reader (thank you!), you know that my older son is going to college for the first time this fall.

If you’re not a regular reader, check this out. Or this. Or this. (And then, if you like what you see, why not subscribe or follow using Google Connect, over there in my left margin? I’d love to see you again!)

I’m trying to live in denial about it for a little longer, but it’s hard. The sale ads that trumpet back-to-school items and discounts have begun to arrive, and some kind of magical fairy has told Pottery Barn Teen, The Container Store, and Target that I have a new college freshman, because I have never received sale circulars specifically geared to college students in the past.

Or maybe I have, but never took notice.

And another thing, WHY is it that it seems like there are incoming college freshmen all around me, even in fiction? Take “Toy Story 3″s Andy, for example. After allowing us a front row seat (or, in my family’s case, a center-of-the-row seat in the back half of the theater somewhere) from which we could watch him grow up, he’s leaving us to go to college (to P.U., according to the pennant that hangs in his room). Don’t even get me started on this movie. Okay, too late. It was wonderful. All Fab Five of us (Jim, the boys, Julesie and me) were teary-eyed for the last ten minutes of the film, right after I thought to myself, “Oh, this is going to be fiiiiine. I don’t feel emotional at all.” And then I had a sobfest. I’ll bet you a dollar that a “Toy Story” gift set including all three movies will be out by the holidays. I’m totally buying it.

I thought Andy was probably the only fictional character I’d come across this summer who was off to college in the fall. At least, I didn’t really anticipate finding any more of them. I was wrong.

Yesterday we went to see the Chicago Shakespeare Theater’s new musical, “The Emperor’s New Clothes”. Here’s the synopsis from their website:

The frivolously fashionable Emperor and his opinionated daughter Sam just can’t get along. But with the help of some colorful characters and not-so-colorful threads, the two come to see themselves—and appreciate each other—for the first time. This world premiere CST Family musical based on the classic Hans Christian Andersen fairy tale promises to warm the hearts of children and adults alike!

Cute, right? And it was. But guess what we learned when the show first started?

Sam, the Emperor’s daughter, WAS PREPARING TO LEAVE FOR COLLEGE.

Are you kidding me?

I started looking around for Ashton Kutcher, but he was nowhere to be found.

At any rate, I made it through the show (it was quite enjoyable and I will be posting a review at SSR&S on Tuesday) and we headed home.

A few hours later, I headed out to the grocery store. As I pushed the cart down the aisle in front, I noticed that their DVD section had a huge “50% Off!” sign hanging on it. I walked closer to see if there was anything there that would be worth buying, thinking about the next few days: Jim and the younger boy are off to Boy Scout camp and the older boy and I will be on our own. A new movie would be fun, and at the sale price ($5 for most!), I hoped to find one.

I saw “Superbad” and thought, “SCORE!!!!” Jim and I watched it a while back and I thought it was hysterical.

Side note: The older boy told me (a couple of months ago) that many people at school think he looks like McLovin’. I don’t see it. Do you? 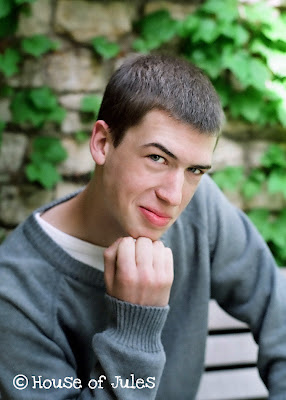 Anyway, I was all pleased with the fact that I found “Superbad” and that I could watch it with the older boy. No matter that, when it came out, I told him he would never, ever, ever watch it. He’s eighteen now. He’ll see it eventually. And regarding the fact that parts of it might be a bit awkward watching it with his mother? Forget that: you might recall that the two of us went to see “Brüno”. Short of watching porn together, that’s about as potentially awkward a movie-watching situation we could be in together. “Superbad” will be nothing.

Oh, and just so I can bring this post full-circle, can I remind you what the plot of “Superbad” entails? I totally forgot the circumstances under which McLovin and friends are running amuck: THEY ARE PREPARING TO LEAVE FOR COLLEGE. (To my sister, who is yelling “How could she forget that???” as she’s reading this: I DON’T KNOW!!!!)

Part of the plot summary, from Wikipedia:
It is two weeks before the end of high school. Evan (Michael Cera) and Seth (Jonah Hill) are long-time friends in their senior year of high school, about to leave for different colleges.

Oy vey. This is making it really hard for me to ignore the fact that my son is leaving for school in less than two months.

Don’t even tell me if Spongebob Squarepants decides to get a college education. I don’t want to know.