Still Too Young To Be Fearful.

As we squeezed into the crowded elevator that would take us up 103 floors to the Skydeck of the Sears “I’ll never call it Willis” Tower, Kate looked at me and said, “I’ve had anxiety about this all week.”

I had no idea. I told her that the gift shop is away from the windows, in the center of the floor, so if she wanted to hang out there, I’d take Bean over by the windows so we could look outside. Oh, and to the Ledge.

Remember how I said that you’d never, in a million years, get me to go out on that thing?

Well, here’s the thing. I was chatting earlier in the day with a woman at the Planetarium, while her daughters played with Bean. She showed me the gorgeous (and mind-blowing) pictures she took of the girls as they were cozied up to the outer corner of the Ledge windows. I thought it would be really cool to get similar pictures of Bean and me (with my loaner Olympus PEN PL-1, of course!).

The elevator took all of sixty seconds to carry us to the top, and we tried to squeeze in at a window so I could show Bean the Planetarium, Aquarium, and Field Museum. Kate was a champ and went to the windows with Bean, even holding her up so she could see better while I snapped photos. As we wove our way around to the west side of the building, the four “ledges” came into sight. Kate said, “Hey Bean, Melisa wants to get some pictures of you out there.”

Without hesitation, Bean ran over to one of them, not realizing

1. there were a couple of people already waiting
or
2. that there might be something to be afraid of.

I found that second one incredible, but completely believable. Children generally don’t think about things like their own mortality or how they might get hurt if they *insert an activity here*. Their ignorance is bliss, and the more I thought about Bean’s lack of fear, the more I wished I could have some of it. Deep down, a little piece of me can reasonably think about the Ledge as being safe; if it weren’t, wouldn’t the glass have fallen 103 floors to the ground by now, carrying with it the happy tourists who just wanted an exciting picture? Most of my brain, though, can’t wrap itself around that idea. The innocence of youth is an amazing thing.

I had big plans, mentally anyway, to step out onto the Ledge with Bean and take a picture of our feet as we hovered over the city. When it came down to it, I just couldn’t do it.

As we waited, I listened to a couple who obviously had differing opinions about the intelligence of going out onto the Ledge. She? Was freaking out. He was using language that you hear when someone is in deep crisis. “LOOK at me. No…LOOK at me. You’re going to be fine. We’re just going to step out on the…LOOK AT ME!” She was shaking like a leaf at the very thought of going out there, and I don’t think he was helping matters much.

It was a little unsettling.

When it was “our” turn, Kate said, “Okay Bean, get out there so Melisa can take a picture!”

Bean said, “I want to do a laying down one.” 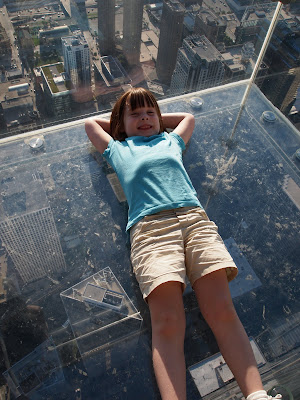 We told her to sit up so I could snap another picture, and I started having heart palpitations. 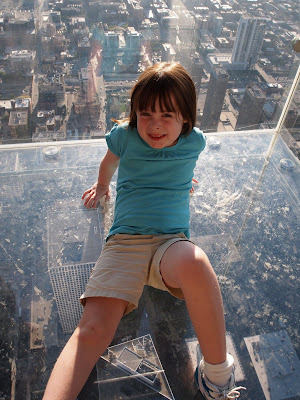 But, as you know, all’s well that ends well. I figure I’ve got about twenty years to figure out what I’ll tell Bean when she calls me up, screaming “WERE YOU CRAZY??? WHAT WERE YOU THINKING???”