You *may* have heard that we are headed to Munich later this summer. The idea for the trip was actually about four and a half years ago, when the older boy was just getting started with his German I class. Having enjoyed the heck out of five years of German class (8th-12th grade) and having spent one month in Germany as a teenager, I knew that I wanted to get this kid over there, to reinforce what he was learning and to make it real. There’s something about traveling to a place whose language you’re learning that solidifies so much in your mind.

Anyway, when the older boy was getting started, I said to him, “You know, I don’t know if you’re going to want to do this, but I personally think that you should go beyond the minimum high school requirements (2 years) for learning a foreign language. By the end of the second year, you’re really just starting to delve into the good stuff. If you do end up sticking with German, I can tell you that I will do my best to get our family over there when you graduate from high school.”

Now, don’t go thinking that this trip was the sole motivator for his completing all four years. At the end of his second year, he really wanted to stop, and I told him it was his choice. Some friends of his were moving on and talked him into one more year. When German 3 began in his junior year, he had a revelation and was a little irritated.

“Mom! Gah! (okay, I don’t really think he said “Gah!”, but it fits) It doesn’t make any sense for me to stop after third year German…I mean, AP German 4 is all that’s left. It just seems like someone should either stop at two or go all the way through four.”

And so he did.

The younger boy just finished up his first year of German and really loved it. (and hey, I will make the same commitment to him! Germany 2013! Woot!)

The three of us will sometimes chat (around the house) in very rudimentary German. The older boy has the best sentence structure; I am very rusty but can understand lots. The younger boy knows the basics. Our conversations are hilarious.

There’s one person who has no idea what we’re talking about, though. Jim does not speak German. He took French I in high school, and I’m pretty sure that he won’t mind that I tell you about how he did very, very poorly in the class. Very. That’s okay though, because even though foreign language is not a strength of his, he more than makes up for it in other areas.

Anyway, since we decided to go to Germany, Jim has made a couple of comments reminding us that he will be the only non-German speaker on the trip. I keep telling him that it’s okay, for three reasons:

1. Most people in Munich speak English.
2. Our awesome hosts, Kat and her hubby, speak English.
3. The boys and I can handle any German that comes our way, if need be.

He’s trying, though. He’s got a couple of words, three to be exact, under his belt. I had the opportunity to tell Kat about them the other day, when she asked me (on Twitter) how I was doing. 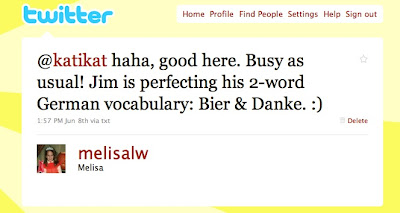 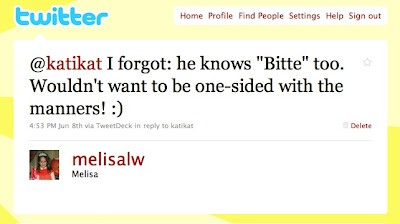 I think we’re all going to be just fine.