Not As Dangerous As Tina Fey & Steve Carrell’s Version, But Our Date Night Was Pretty Exciting, Too.

Our date night last night turned out to be way more interesting (and even exciting!) than we expected.

First of all, we left our house in the western burbs at about 7:30 p.m. The Blue Man Group show (which the older boy and his girlfriend were attending: read yesterday’s post if you missed it!) was at 10:00 p.m., and we wanted to leave plenty of time in case the Eisenhower was as terrible as it usually is. We were shooting to get to the Lakeview area between 9-9:30.

Miracle of miracles, it only took us about 45 minutes to get there, which left us with a new issue: what to do for a little while before the older boy and his girlfriend could just go hang out at the theater until show time?

As it turned out, we ate up about thirty minutes just driving around in the Pride Fest traffic, looking for street parking. That’s right, we happened upon the Lakeview area right in the middle of Pride Fest 2010.

We finally decided to just get the valet parking at the restaurant where Jim and I planned to hang out once the older boy and girlfriend went to Blue Man, and we scored when the valet guy told me to just park right there in the valet loading zone, because he was off at 10:00 p.m., which was way before we’d be leaving the area. Thus, my car was conveniently located right on Halsted for the evening.

The four of us walked to CVS pharmacy (whee! exciting!) and then at 9:00 Jim and I left the two of them at the Briar Street Theater so we could head over to Jack’s on Halsted. (Thanks to @jennifer8582 who suggested that we go to Jack’s!)

We requested seating on the back patio, which was lovely. (BTW, all pictures in this post were taken with my cell phone because I forgot my Olympus at home. Boo.) 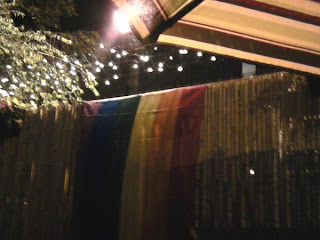 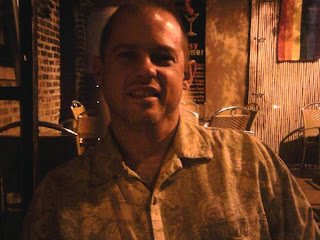 Our server was great. He greeted us with “Hello, friends!” and said things like “I like your style” a lot. I nearly asked him if he wanted to have a seat and share our food. But I didn’t.

We ate dinner early, back in the burbs, but we were here, living the wild life in the city! So we ordered an appetizer to share: Brie Cheese Pizza. IT ROCKED, and I have already googled some recipes. I might call the restaurant and ask them for theirs, though. 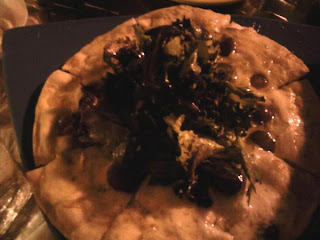 We also got dessert (wild life in the city, remember?) and just one drink each, before Jim switched to coffee. (he was falling asleep! Seriously!)

After we finished, we decided to go walk around the streets and check out the Pride for ourselves. We saw so many interesting things, I can’t even tell you. But I can show you a couple. Here are some mannequins in the window of Hollywood Mirror: 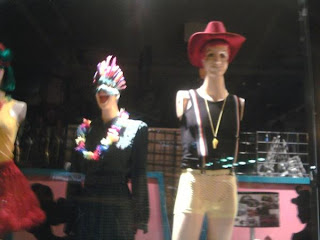 I love the name of this espresso bar in relation to its neighborhood. 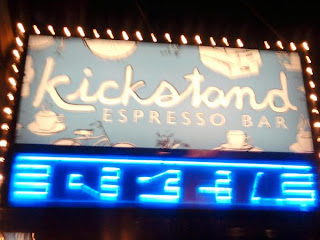 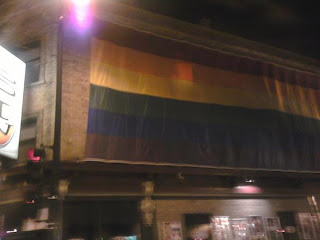 After walking around for a while and seeing all kinds of interesting people, we decided to take a load off at Starbucks. We sat at the window so we could continue to people-watch. 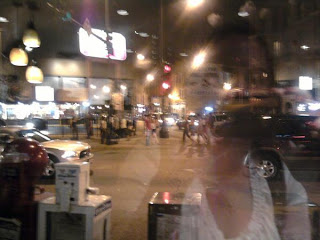 Finally (and I do mean FINALLY), it was about time for the “kids” to appear outside of the theater after the show, so we headed over there, and then we all made our way back to the car. And that’s when things got REALLY interesting.

I was pointing in the opposite direction (on Halsted) from the way home, so I had to turn around. Traffic was awful (this was at midnight), so I drove until I could make a left turn onto a one way street I had turned on (to make my way around the block before we parked) earlier in the evening.

Mistake. You see, towards the end of this little road, there is a huge hole in the street which was covered with construction horses. There are cars parked on both sides of the street. Earlier in the evening, I was able to (as were any other cars that used the street) scoot around the construction mess on the left side, because there was room.

Now? A stupid car had squeezed itself into a parking space which was great for them, but not so great for THE LIMOUSINE full of drunken folks, which had made the mistake of turning onto this road and was now unable to squeeze itself between the poorly-parked car on the left and the huge construction hole on the right. Check out my visual aid, which I spent 45 minutes creating for you. Note the rainbow colors, to go along with Pride Fest. 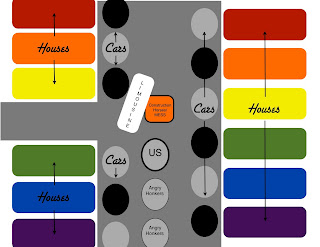 Anyway, we were “lucky” enough to have a front seat to all the action:

~The cars behind us, honking like crazy, as if there was a quick fix to this situation
~The totally wasted girl in the back of the limo, shouting profanities in the direction of all the cars that were honking
~The guy who was trying to help the limo driver navigate, standing in front of my car: so close that had I taken my foot off the brake he would’ve been either a pancake or a new hood ornament

Finally, after nearly ten minutes of total chaos, the limo was able to get itself into the alley, and I was able to (barely) scoot by.

Then, we headed down Halsted and apparently missed our turn onto North Avenue to head for the highway. Oops. We stayed on Halsted and ended up in the West Loop (or Oprahtown, as I call it, because that’s where Harpo Studios is located), and when I finally got on I-94, I was unable to cross all the lanes of traffic in order to get on the Eisenhower for home, so we found ourselves on the south side. Oops.

I got off I-94 and, while Jim thought I was just going to get back on the highway going in the other direction, I didn’t, and tried to head back into familiar territory. This was a little tense, as Jim was worried about the areas we were driving through and I was, as usual, the Queen of Denial, happily just driving. I kept my eyes on the Sears (I’ll never call it Willis) Tower to continually reorient myself.

Then, I just couldn’t figure it out (getting to the highway). I knew approximately where we were, but not completely. So I did what I thought was the best idea: headed east, towards the Lake.

Heck, if you go far enough east in Chicago you’ll end up in Lake Michigan, and I am most familiar with the half mile of Chicago that runs along the lake, so why not?

It was a winning strategy. I got us to State Street and Marshall (I’ll never call it Macy’s) Field’s, turned right on Wabash, and found Congress, which led us right back to the Eisenhower…and home sweet home.

Previous post: The One In Which We Stay Up Way Past Our Bedtime