Well, another lacrosse season has come and gone. This year, with both boys playing (the younger boy on the Fresh/Soph team and the older boy on Varsity), our family schedule was jam-packed. On some weeks, I had three or four evenings of games to watch. It was a lifesaver that the older boy has his own car to get himself to away games for pre-game practice so I could join later, as well as the fact that both of their teams did their Monday through Friday practices at the elementary school in our own neighborhood.

Each of them had a very different season from the other. This was the younger boy’s first time playing a team sport, ever–much like the older boy when he started. The younger boy plays midfield, and had a great time this year, working on his skills and attempting to score some goals (though he did not; there’s always next season!).

The older boy, as you may recall, is a goalie. He stepped up to the goalie position when he started playing two years ago after his middie skills weren’t really working out; the JV goalie was injured and my kid ended up training to be the sub. Last year, he was the starting (and only) goalie on the JV team. This year, partly due to a rezoning in our school district, our club’s three lacrosse teams suddenly had SIX goalies. The older boy ended up making the Varsity team as the number three goalie.

If you know anything about team sports, you can imagine what that means. To say he didn’t get much playing time would be a massive understatement. I won’t go into all of the emotion involved in that except to say that, for me, it was terribly frustrating to watch my kid go to practice for 2+ hours every day, and then stand on the sidelines for every single game, save for 2 quarters (1 at each of 2 different games) during which he was allowed to play, when his team was ahead by a mile.

The great thing? He didn’t complain about it like I did. It was quite amazing. I think he really felt the team spirit and enjoyed being with all of his friends, sidelines or not. It probably also helped that his friends let him know that they were upset he wasn’t getting to play as well, and the two times before the end of the season that he did play, they really jumped on him hard at the end of the games (tradition). He was a great sport.

By the end of the season, it was really hard for me to go to the games, because I Just.Wanted.My.Son.To.Play. I continued going, of course: I still supported our team, and certainly if my kid can stand on the sidelines for the length of a whole game without complaint, I could sit in a little chair on the other side of the field and support my son.

A couple of weeks ago we played our final two Varsity games of the season. The first one, on Tuesday of that week, was against a team whose record is very poor compared to ours. It’s always a high scoring game for us. The second game, on Thursday of that week, was Senior Night. All of the seniors are honored at halftime, and in theory, all seniors are supposed to get a few minutes of playing time. As it happened, that game was versus one of our biggest rivals. Early in the week, I told the older boy not to expect to get to play on Senior Night, just so he’d be prepared in case that really happened. We figured that, if he got any play time at all, it’d be during the Tuesday night game.

On that Tuesday night, I set up my chair to watch the game and was all in knots because I wanted him to play so badly. The coach put the number two goalie in for the first quarter. I was happy to see that, because that goalie had played about the same number of quarters as my son this season.

At the start of second quarter, the same goalie stayed on the field. I felt myself getting emotional and was thrilled that no other parents were sitting in my vicinity because I didn’t want to talk to anyone. I sat there, stressed out and anxious, just waiting. We scored more and more, and I’m pretty sure that at halftime we were winning 12-2.

At halftime, my heart soared: I saw the older boy tossing the ball around with another player, like he was warming up.

And then, at the start of the third quarter, the same goalie (number two) went back on the field. I was devastated.

Our team kept scoring. And scoring.

Before I knew it, the quarter was over. Time for fourth quarter.

WHO IS THAT, walking onto the field?

As soon as he went over to the goal and the quarter started, I started crying. (Remember, I’m in my crying era?) I wasn’t crying the ugly cry; it was just a little bit of teary-eyed business, with an occasional drop falling down onto my cheek.

And then, the dad who takes all of our team pictures at EVERY SINGLE GAME, of EVERY SINGLE PLAYER in action (and very kindly makes a CD for each player with their pictures on it), was standing behind me, and he exclaimed in all seriousness,

He didn’t know who my kid was, after an entire season. Great, I thought, my kid not only got to play for less than 25 minutes total so far, but he will not have any individual photos this year.

Trying not to let him see me crying, I said, “That’s Older Boy Wells.”

“NO, he’s the third Varsity goalie. He’s played for two quarters before now.”

And off he went, down towards that end of the field to snap away.

And there I sat, crying. I was proud of my kid, relieved that he got to play, and emotionally spent.

Toward the end of the quarter, the dad photographer came back and put his hand on my back as he said, “That’s your son? He did a great job!” All I could do was nod, because I couldn’t speak through the crying.

When the game ended (we won 24-5), I got to watch the team jump all over my goalie, for what I thought was the last time. I smiled through my watery eyes and then left the field as quickly as possible so I wouldn’t have to talk to anyone.

On Senior Night, we were all prepared for him to not play. It was a competitive game. It was a miserable game, because it was raining. Halftime, with the senior tributes, came and went. Third quarter came and went. Fourth quarter started and though we were ahead, it was only by a couple of goals.

Two minutes before the end of the game, our coach called a time out. When play resumed, I noticed that the older boy was at the goal! I was thrilled that he got to play on senior night. He made two incredibly awesome saves while he was in, including one against the other team’s best shooter. It would be the last time he played, as he didn’t get on the field during post-season. I’ll never forget it.

Best of all, my very talented sister took this picture after the game, which I plan to enlarge and frame for our family room. I will treasure it always. 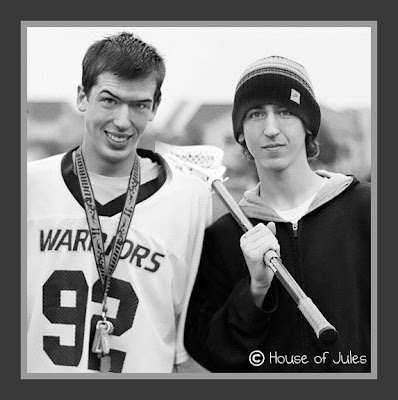 Next post: A Rant On Raising Children Which Isn’t Meant To Be A Rant…

Previous post: A Little Bit Can Last A Lifetime