If Not Now, When?

Bike the Drive is an annual bike ride (duh) in downtown Chicago on Lake Shore Drive, which is one of the busiest (and most beautifully equipped with spectacular views) streets in town. The organizers close the LSD (yes, we really call it that) to cars for the morning, and it’s a phenomenal experience. The total distance, if you do the whole thing, is thirty miles. The last time we did the ride, in 2008, we had a great day. I just looked back at the blog post I wrote about it and almost choked when I saw how much my kids have grown since then, but that’s what happens I guess, when these boys just keep eating and eating like they do.

We weren’t going to do it this year. It’s an expensive venture, at $45 per adult ($15 for ages 12-17). The older boy really, really wanted to do it, and Jim and I thought that it was probably something we should skip this year because we’re trying to spend less in certain areas so we’ll have more money for our trip to Germany this summer.

And then a couple of weeks went by, and I entered my Crying Era*. Then, I got a reminder e-mail regarding registration for Bike the Drive since I’m on the mailing list. As I sat at the computer staring at the e-mail, I changed my mind about not doing it. What brought that on?

The older boy may not want to do it with us next year. Or ever again.

It’s these sorts of things you start to think about when your kid is getting ready for college: taking advantage of opportunities as they present themselves, NOT putting things off like you usually do, and saying “why not now?” instead of “maybe another time”.

I discussed my change of heart with Jim, and he agreed wholeheartedly. I signed us up. It happened to be one of our better decisions of late. Not only was the weather totally perfect (the first time we did the ride, it rained until we returned to our car!), but the boys got along really, really well. Most often, they just tolerate each other. On Sunday, they were…interactive. Goofy. Silly. It put a smile on my face.

It started as soon as we got in the car, at 4:15 a.m. One was a little more awake than the other. In fact, if you replace the two of them, two and a half years apart, with girls who are four years, eleven months apart, you would have a picture of my sister Julesie (not a morning person) and me (SO a morning person). 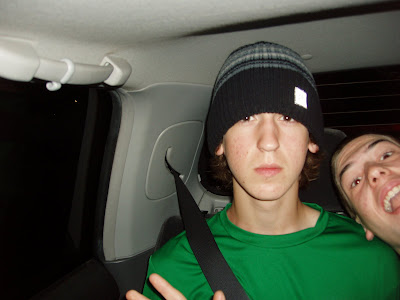 When we arrived in the city and got ourselves and our bikes ready, the older boy got himself psyched up for the morning** while the younger one looked on. 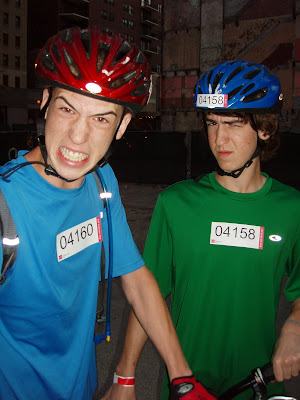 First we rode south, to the Museum of Science and Industry (7.5 miles from the start) and then we rode to the northernmost point (Bryn Mawr, 15 miles from MSI). The 7.5 miles back to the start/finish is my favorite leg, because of this view of the John Hancock building: 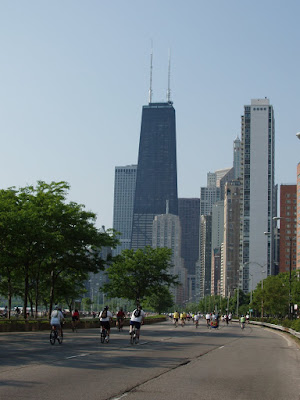 We always make a photo stop here. I tried to get a picture of my three guys, but the younger boy insisted on being up front. I have no idea why he did that, but I think the picture is hilarious***. 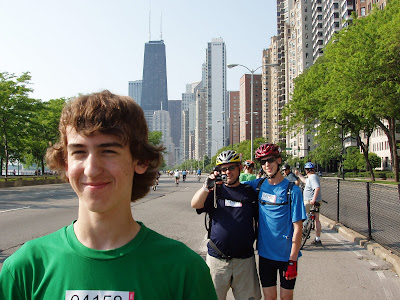 And then, I tried to take some pictures of the the two boys. The photo session started off “normal”, but rapidly declined into something….that I totally love because it’s so silly. 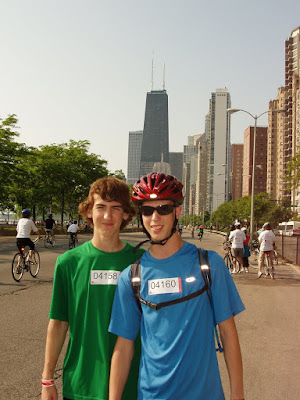 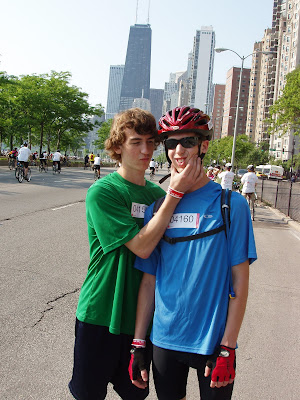 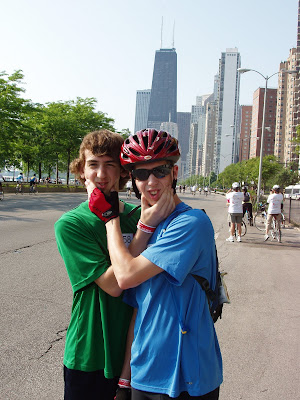 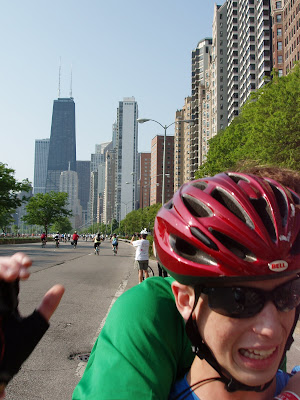 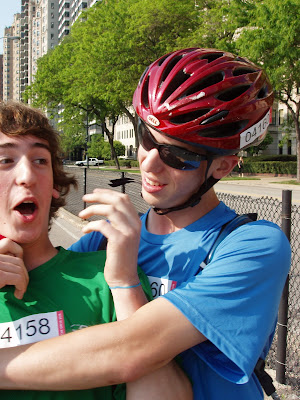 It is these moments that I cherish the most as the way we live as a family begins to take a major shift in a different direction. I’m so glad we had this day!

*Starting on Mother’s Day, I became a hot mess of random tears in preparation for the older boy’s departure for college this fall. I never know when it will hit. It sucks.
**Forgive the red eyes. I was too lazy to fix them.
***Probably why he did it.

Next post: I Always Said I’d Never Do The Couch To 5K Program. (Never Say Never)