A Little Bit Can Last A Lifetime

We are always told how the littlest of actions, good or bad, can affect somebody very deeply. Even so, bad things are, for some reason, kept in the “easily remembered” files of our brain, and the good things are more easily filtered and forgotten. Often you’ll hear or read about the long-lasting effects of a negative remark or some other non-event that, when triggered, can cause a person almost as much pain as it did initially.

You’re in luck today: I do NOT have one of those negative stories. I have a story about one little kindness, one simple little action, that was performed by someone who, I can practically guarantee 100%, thought nothing about it after it happened, even though I think about it often.

First, I have to take you back to the fall of 1985. I was in high school, starting my senior year. It was a great time in my life; I had lots of friends, I was excited about my classes, I had a really fun job working with my friends at a brand-new McDonald’s adjacent to our school, I had an awesome boyfriend (future husband!) and I was on the yearbook staff. 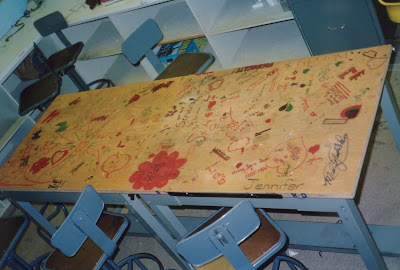 This picture of the table in the yearbook staff workroom was taken in 1985-86 with some old camera I owned in high school. This table has lots of goodies scribbled on it: in addition to our names, it says “Prince and the Revolution”, “I love Jim” (yes, I wrote that), “We are Seniors”, “Class of ’86”, “Prom is going to be AWESOME”, “Oh boy!” and so many other fun things. It was bare at the beginning of the year. Oops.

One of my friends was not only a fellow yearbook staffer but also a member of my McDonald’s crew. Melanie was smart, funny, and beautiful (She still is). We always had lots of fun together. Most of my memories of McMel (my nickname for her AND her nickname for me) are just general, fun, senior year friend stuff. I remember giggling like crazy with her at work, especially the day on which the boy she was dating at the time pulled up to the drive-thru speaker and, over the system that the entire crew in the kitchen and behind the counter could hear (this was before the days of headsets, younguns!), placed his order:

“I’d like to order one *insert McMel’s real name here*!”

But the most impactful moment I ever experienced with McMel was on a deeper level than giggling over a boyfriend’s antics. I was going through a really sad time because I missed Jim terribly; he graduated the previous May and left to start his enlistment in the Navy. One day I was beyond depressed over his absence. I went to yearbook with a huge frown on my face that just wouldn’t go away. McMel was doing her best to cheer me up, but it just wasn’t working.

She kept trying, though.

We had a boombox in the room (Music! One of the perks of yearbook staff!), and OMD’s “If You Leave” started playing. McMel, acting goofy, was singing along and, during the chorus (“I touch you once, I touch you twice”), she was in my face, dancing, and poking my shoulders to the beat of the music. She broke through my stormy mood; she made me laugh.

I think of that every single time I hear that song (and being an ’80s music freak, I hear it often: it’s one of my favorites!). It was just a moment in time, just a friend trying to cheer up a friend. It wasn’t anything that would have made the newspapers (or the yearbook!), but that day, the TLC given to me by my friend McMel meant the world.

Think about that the next time you wonder if what you’re doing will make a difference.

Next post: I’ll Tell You Who He Is…He’s MY SON!