Desperately in Need of a Christmas Miracle

It’s a sad state of affairs around here in regards to the older boy’s car. He and Jim (mostly Jim, due to the older boy’s being smothered during the final couple weeks of senior year with work, testing, lacrosse, papers, prom prep, and other such busy-ness) have been working on the car for nearly two weeks, trying to figure out exactly why it won’t start. Jim has taken apart everything in the starting assembly. He’s tested the starter, ignition switch, and relays, and he was, over the past couple of days, checking each and every wire for a short somewhere.

I have frequently remarked that it would be SO tremendous if he could have a moment much like Clark Griswold in “Christmas Vacation”. You know the scene, right? It’s the one in which he tries desperately to figure out why–oh, why???–the thousands of Christmas lights in his display will just not work, even after he’s checked every single bulb, and then finally (with Ellen’s help), they do, and it’s a Christmas Miracle.

Here’s the scene, in case you haven’t seen the movie* (if you’re impatient, fast forward to 3:50. But really, you’ll miss out on the build-up if you do that!):

When I told Jim that this really reminded me of the whole Clark Griswold thing, he was mildly offended because he thought I was comparing HIM to Clark Griswold, and that is not the case. He is way smarter, sexier, and even-keeled than Clark (no offense, Chevy!).

As smart, sexy, and even-keeled as he is, Jim has come to the end of his options as far as what he can check out himself. This evening he’s putting everything back together and we’re having the car towed to our local mechanic tomorrow, to see if they can find the problem. If it’s too big and expensive, the older boy will have to make the decision to sell the car for parts, because he has to save his money to help pay his college tuition this fall. It’s heartbreaking, because he bought the car with his own money, as you may recall, less than a year ago.

Though it’s highly unlikely, I’m still keeping my fingers crossed that we’ll be singing “Halleluyah” when Jim finishes up tonight: he’s going to try and start it one last time before we call the tow truck. Keep your fingers crossed. 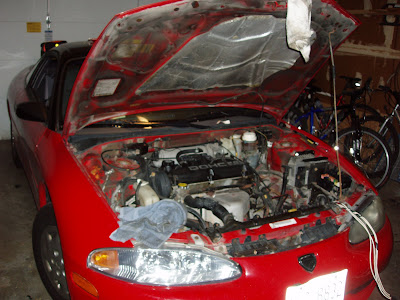 *Haven’t seen this movie? SHAME ON YOU! It’s a classic!