Crossing That Bridge Because We Came To It

The older boy and I met my sister Julesie at the riverwalk today, so she could take his senior pictures. It wasn’t the first attempt; it was the third. Last time, we were in Tennessee for Thanksgiving and although she took a couple of rolls, he was really crabby that day and she said it showed through in the pictures. The first time we tried, it was way too windy and cold. I posted one picture from that session; if you don’t remember it, you must click here, especially if you need a laugh.

We had high hopes for today, and it went very well. I’ll post a couple when she gets done with her photo editing.

What was really fun, other than watching the two of them work together (which is always entertaining), was our little trip down memory lane. Things from the past kept on coming up, like what she used to ask him to say (when he was younger) in order to get the smile for the picture, like “fuzzy pickle!” or “your dad wears pantyhose!*”

Once I shouted “No fillers!” because when he was about four, Oscar Mayer ran a commercial in which “no fillers” was written with mustard on a hot dog. After seeing that ad a few times, the older boy asked me to write “no fillers” on his hot dog, and I told him that I would if I could take a picture. His grin was priceless. I’ll have to find it and post it; it was hilarious.

When some birds flew by behind him as Julesie was setting up a shot, I suggested that he do his Kolokolo Bird line from the 4th grade play, so that they would fly back into the shot because that would be nice for the background.

And then there were the memories of past photo sessions at the riverwalk in general that flooded back to me today. It’s our go-to place for pictures because it’s so beautiful, and it’s really cool to see pictures of the boys at different ages in the same areas, like the covered bridges. 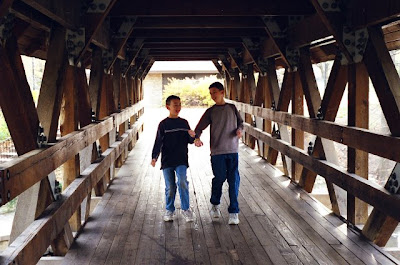 My favorite bridge pictures aren’t the ones in which the boys are on the bridges at all; rather, there’s a spot at the end of one of the bridges where the boys pose for pictures at each and every session.

The older boy posed there today. I can’t wait to see those shots.

He and his brother posed there for me when I was taking pictures of them FOR Julesie in 2007: 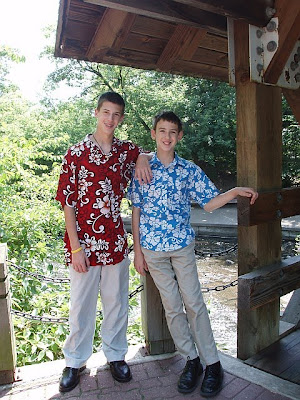 One of my most treasured pictures of the two of them together was taken there eleven years ago. 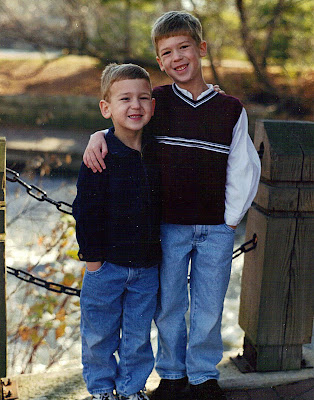 Photo ©House of Jules 1999
Time flies when you’re having sons**, don’t you think?

*He doesn’t, by the way.
**And daughters of course, but that didn’t sound good when I tried to throw it in there.

Next post: They Think I’m Nuts…But It’s All Part of the Plan.

Previous post: Fool Me Once, Shame on You. Fool Me Twice…