I would guess that contrary to what they do or say, all new parents know deep down that comparing their child to another is not a good idea. All of the parenting books say so, anyway. We all know that all children are different, yet playgroups are full of insecure parents who are worried that little one-year-old Johnny isn’t walking as well as one-year-old MacKenzie, or that Susie can string three words together while Becky has yet to say anything, and Becky is six months older.

And it doesn’t stop when the kids have outgrown the playgroups and move on to school. One mom might tell a friend about how her little Terry won the spelling bee, but that friend will almost surely counter with her own child’s spelling accomplishments or, worse, a triumph that’s in an entirely different subject.

We all do it. Even if we don’t say a word in response to a friend’s story about how great her child is at *fill-in-the-blank*, I can say that nine times out of ten, we’re thinking of a counter-boast, and even the most well-mannered, thoughtful types will practically have to cover their own mouths to avoid saying something that will harsh their friend’s mellow AND make it obvious that a comparison is happening.

I knew all of this from the get-go, and over the years it’s been an occasional struggle for me to not only keep my mouth shut at the right times, but also to let go and allow my kids to accomplish what they accomplish at their own pace, in their own way.

For some reason, I didn’t immediately transfer the whole “all kids are different” idea to each and every child (um, that’s TWO) under my roof. The comparison started the moment the younger boy was born. He weighed nine pounds, eleven ounces, which was one pound, five ounces heavier than the older boy on his day of birth.

“He looks so much like me, where the older boy really resembled Jim, don’t you think?”

“His skin tone seems a little more olive than the older boy!”

Why do we parents do that?

Luckily for me, the habit lasted only until the younger boy’s one month mark.

On that day, I took him to a portrait studio, just as I had done with the older boy on his one month birthday. The older boy’s picture was adorable. The photographer placed him in a doll-sized cradle, on top of an artfully-placed blanket. His head rested on a little white pillow and his legs were tucked in “just-so”. I adored that picture (still do!). 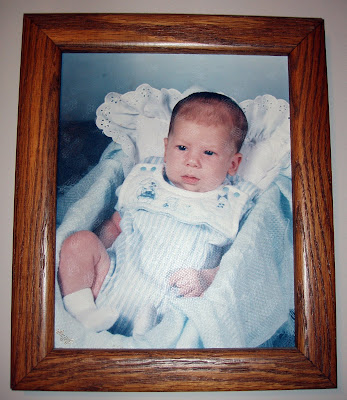 I was so excited when the younger boy turned one month old, so I could take him back to that same portrait studio and get the same picture taken*.

When I arrived, I told the photographer what I wanted, and he set up the cradle, the blanket, and the pillow for me. I carried the younger boy over and placed him in it.

Something was weird. His head was nearly over the top edge and his legs were too long to be tucked neatly inside like the older boy’s legs had been.

And then it dawned on me.

He was bigger than the older boy at the one-month mark**. It never occurred to me that, oh gee, he was nearly a pound and a half bigger at birth and nursed like it was going out of style, and, well, he was HUGE. The fact that I gave birth to both of them did not provide any assurance that they would be alike in any way, not the least of which being their size. Trying to get him into that cradle was like trying to fit a square peg into a round hole. The younger boy would not be a carbon copy of the older boy.

Even today I’m appreciative of that specific experience. It was a sign of things to come. My boys are very, very different from each other, but both very awesome individuals in their own ways. 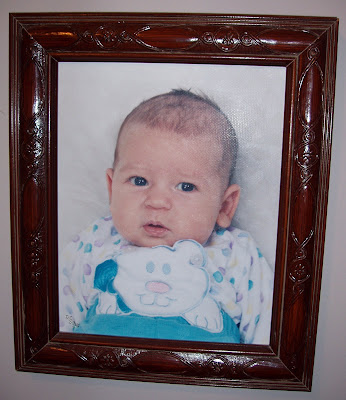 *Why the heck would anyone EVER get the exact same picture like that, of two one-month-old babies? I must have been nuts.
**Duh.