What Kind of Gift Should I Buy For An Eagle Scout?? (I’ll Tell You!)

By far, the general search topic that brings people to Suburban Scrawl (besides the “Melisa with one S” search, of course) is anything that has to do with “Eagle Scout”. As it turns out, there really isn’t much out there regarding etiquette for Court of Honor speeches and gift-giving. People ask me about the gift-giving thing all the time anyway, so I thought I’d write a post about it as a public service, you know, because I’m all about giving the people what they want.

First, for you folks who arrived here because of a search and may not know from being a regular reader what it means to be an Eagle Scout, I should preface with some helpful information. The Eagle rank is the highest rank that can be achieved (or earned) by a Boy Scout. It is never spoken of in terms of winning, i.e. “he won the Eagle rank”, because all ranks in scouting require hard work to get there, the Eagle rank being exponentially harder to earn than those ranks below it. Only a small percentage (most reports claim 4-5%) of boys in scouting will achieve the rank of Eagle, and it is so huge that it is the only high school aged achievement that can stay on a resume for all of his adult life. Think about it: most adult men don’t have things like “First Chair in Band” or “President of my Junior Class” on the resume, do they? Eagle Scout is different, though, because to have earned the Eagle rank indicates that the young man possesses superior leadership qualities. He embodies all of the attributes of Boy Scouting–trustworthy, loyal, helpful, friendly, courteous, kind, obedient, cheerful, thrifty, brave, clean, and reverent. These are obviously great qualities which any employer would look for in a potential employee, and to have Eagle on a resume speaks volumes about a candidate before he even goes through the interview process. Once an Eagle Scout, always an Eagle Scout.

Requirements for the Eagle rank include things like being active in your troop (which can be difficult in high school because of all the other stuff going on), holding a troop leadership position, earning badges, obtaining letters of reference that attest to your character as it specifically relates to the Boy Scout attributes, and leading the execution of a major project which benefits the community. Like I said, it’s huge. 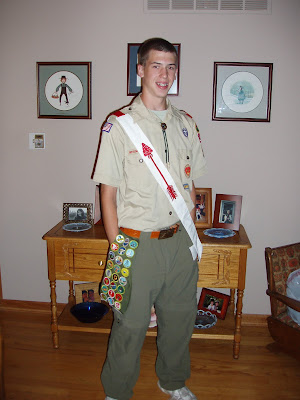 Here’s my son on one of the biggest days of his life so far, the day he officially passed his Board of Review and became an Eagle Scout: August 12, 2009.
If you are invited to a Court of Honor ceremony for a new Eagle Scout, you have options when it comes to bringing a gift. How well do you know this young man? If you don’t know him well, I recommend a card with a nice note about his accomplishment written inside. That’s it? Yes. A sincere note which acknowledges the milestone and tells him how proud you are because you know what a huge deal this is will be really meaningful to him, and will probably be kept indefinitely with his Court of Honor scrapbook or other memorabilia.

If you know the young man well enough to give him more than a card, ideas for gifts are:

1. Money
2. Gift cards
3. Eagle-themed gifts. If you have a local scout shop, go there. I guarantee they have lots of Eagle gifts for purchase. In fact, you can order online, too. Here: I just did a search for you at the official online Boy Scouts of America shop. Click here!
4. Engraved gifts to commemorate the occasion: a pocket knife (don’t worry; he’s an Eagle Scout and knows how to responsibly own a knife.), a picture frame, or anything else that you think he’ll enjoy. Make sure to find out from him or his parents the date of his final Board of Review, because THAT’S the date you would engrave on a gift, when he officially became an Eagle Scout. The Court of Honor is just a ceremony and that date isn’t as important.
5. Books. You can find lots of books about leadership, and you can find lots of books by well-known leaders.
6. Stock: if you want to get a little fancy or creative, you can buy him a share or two of stock in a company he really likes. The idea is that it’s an investment in the future.

Of course it goes without saying that a card and a thoughtful note should be included with your gift!

I hope this helps. Tomorrow I will tackle another gift etiquette issue that I am often asked about: the Bar or Bat Mitzvah gift!

Tagged as: Here’s Your Help

Next post: What Kind of Gift Should I Buy For A Bar or Bat Mitzvah?? (I’ll Tell You!)