Over the weekend I attended a bloggers and brands event at the Hard Rock Hotel Chicago, hosted by Silicon Valley Moms Group and sponsored by some incredible companies, which I’ll write about on my review blog over the next couple of days. Due to the construction mess on the Eisenhower, I left really, really early and–much to my delight–arrived at the Hard Rock approximately an hour early. It was the perfect amount of time to take a walk around the block and take some pictures of the city I love so much. I posted my favorite shots yesterday including this one, the subject of which happens to be in my top five most favorite features found anywhere in the Chicago area: 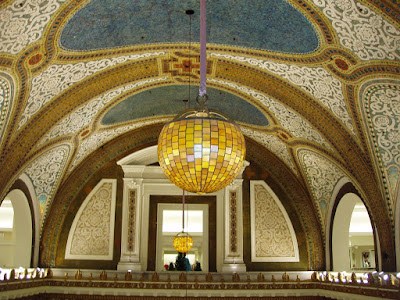 It’s the ceiling over the cosmetics department inside Marshall Field’s (Again? NO! I’ll-NEVER-EVER-call-it-Macy’s) on State Street. This ceiling, created by Louis Comfort Tiffany, was installed in 1907 and is the world’s largest unbroken example of favrile glass. The ceiling covers over 6000 square feet and includes more than 1.6 MILLION pieces of glass.

It is truly spectacular and one of the most beautiful things I’ve ever laid eyes on, in my entire (long) life. I took the elevator up to the fifth floor in order to get what turned out to be great close-up shots. As I snapped my pictures, I thought a lot about the work it took to put that up, more than one hundred years ago. I wondered…

Could those artisans have imagined that it would have lasted so long and brought so much joy to store visitors, and so much pride to Chicagoans like myself?

What would the glass-making process have been like, knowing they needed so much to cover such a large space?

Did they have a party after the installation?

Did they bring their children to the store, and stand under it just like I enjoy doing?

Did their chests puff up with pride whenever they got a chance to tell someone “I did that”?

To be honest, I could have stood right there for hours, just taking it all in, but alas I had other special things to do. That’s okay; I’ll go back very soon. In the meantime, I’ve got these great pictures to stare at… 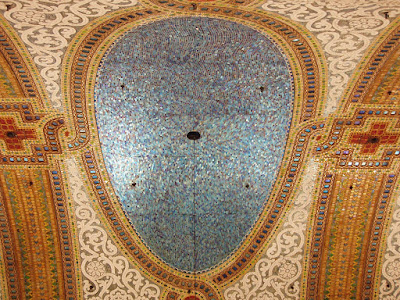 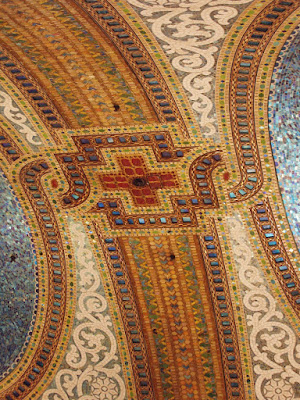 Next post: Need A Hundred Bucks? You Could Win It!