Last week I received an e-mail out of the blue from my friend Rob in Liverpool. Rob and his wife Louise, who I met while on that fabulous trip to Europe with Kate and Scott nearly four years ago, were going to be in Chicago for a couple of days and wanted to know if I would be able to meet them at some point during their stay.

Hell yes, I would!

I was really, really excited to see them again. The hospitality they (and Rob’s parents, too!) showed me in the United Kingdom back in 2006 was unparalleled, and the four days I spent in their home area made up one of the top travel experiences of my life. I was thrilled to be able to visit with them on my own turf, and we made plans to meet for drinks.

Jim and I made our way to the city last night, and it took FOREVER. Can I say, on behalf of all Chicagoans, that I hope the construction crews who are working on the Eisenhower this summer will get the job done as quickly as possible?

And get this: Jim and I didn’t even take the Eisenhower last night. We took I-55 as an alternate route. (Any major construction on any Chicago expressway causes problems on every road. GAH!) Though it would normally take us just under an hour to get to our meeting place, it took more than two hours. I thought I might crawl out of my skin from the stress.

Winter’s over, and Construction Season in Chicago has officially begun, people.

At any rate, of course it was well worth the traffic and stress (and listening to Rihanna’s “Rude Boy” about twelve times) to visit with Rob and Louise.

When we arrived at our meeting place (fortunately only ten minutes late, because we tried to anticipate the hellish traffic and Jim left work early) I found them immediately, and introduced them to Jim. We had a lovely dinner and talked and talked. I was amazed at what they had already seen in Chicago in the two and a half days so far: they’d been up to the top of the Sears (and-no-I-don’t-call-it-the-Willis) Tower, they had walked around Navy Pier, they enjoyed drinks in the Lounge on the 96th floor of the John Hancock building, they’d been shopping on Michigan Avenue, they’d been to Marshall Field (and-no-I-don’t-call-it-Macy’s) on State Street, and they’d been on the “El”. I was a proud Chicagoan. They also, by the way, visited American Girl Place, and were completely gobsmacked (like that? heh.) over the amount of money that was being spent there.

They hadn’t seen Millennium Park yet, so we took them there. When you visit Chicago, you must visit Millennium Park to see “the Bean”, the Pritzker Pavilion, and the Crown Fountain. It all has an ethereal quality at night; it was just beautiful. After walking around the park for a few minutes, we headed back up Michigan Avenue towards the Wrigley Building.

And might I add how terribly PROUD I was of my trusty, dented, pink duct-taped Olympus? Check these out! 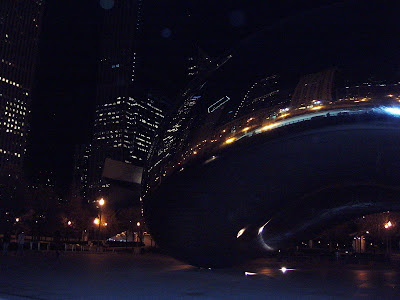 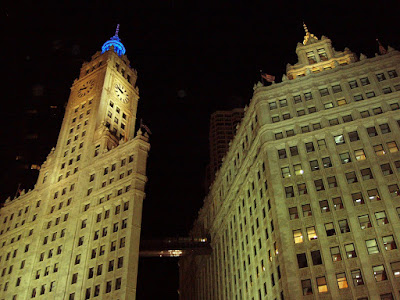 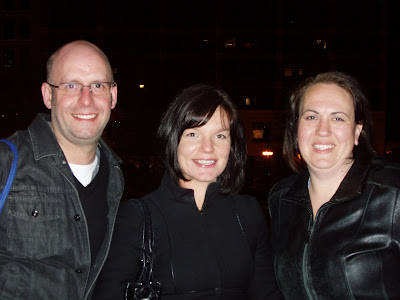 Rob, Louise, and Me

It was a lovely evening with lovely people, and it made me hungry to get back to the UK. I guess I’ll start thinking about that after our trip to Munich…

Thanks again, Rob and Louise, for including us in your Chicago visit! It was wonderful to spend the evening with you! xoxo