It’s Prom Season! Did you know that? If you’re not a parent or if you have small children, you probably don’t put any thought into the biggest dance of the year at all, but in my house the chatter is in full force.

It was a given that the older boy and his girlfriend of six months would be going. She bought her dress last Saturday and has put much thought into her hair and other details, but then preparations had to cease because there was one detail that my son had to take care of: he had to ASK her.

I know. And it’s not even that easy. Back in the day, “asking” was just…asking.

“Would you like to go to the prom with me?”

Nowadays, “the ask” is a bigger deal. The asker comes up with a creative way to ask the potential date, like writing the question on a card, attaching it to a stuffed animal, and presenting it. Or balloons. Balloons are good: the older boy’s girlfriend asked him to the Turnabout Dance a couple of months ago by writing the question on balloons and filling his entire car with them. My friend’s son went to his (potential) prom date’s house, messed up her room (with her mom’s permission and supervision), and left a big posterboard there which said, “I’ll be a mess if you don’t go to prom with me.” You get the idea.

MY son completely amazed me. He set up an elaborate scheme, with the help of his girlfriend’s carpool partner and friend–who happens to be one of the students who runs the high school television studio. On Wednesday he dressed up (tie and everything!) for a dual purpose: a German class presentation and his “ask”. After school he met this guy (and a teacher) in the television studio, and recorded his question, which would be a part of the Friday video announcements during second period. He basically said, “Hey Warriors! (and then, addressing his girlfriend by name…) Happy six-month anniversary; would you go to prom with me? Aaaand…don’t forget, Warriors, today is the last day to purchase your prom tickets!”

This broadcast went out to the entire student body, which numbers around 4000-4500 students. His bravery was so impressive to me, and it was also baffling, because I don’t know where he got it. At his age, Jim NOR I would have ever done something like that: we were both shy with others outside our different circles of friends.

When he told me of his plan, my first thought was “Eeek! He’s either going to be the kid who’s getting high-fived all day, or he’ll become ‘that kid who was all goofy on tv’.” That, however, was me projecting my own teenaged fears. He could have cared less*. And that is perhaps the most outstanding part of this whole thing for me, realizing that Jim and I have raised a kid who doesn’t care much what others think of him: he marches to his own beat. As a parent, all I can say is…Wow.

Speaking of brave, I thought I’d put Jim and I out on a limb and take you back to our first prom, when he was a senior and I was a junior. These weren’t taken with my trusty Olympus (because they are circa 1985), and the quality isn’t the best, but…enjoy. 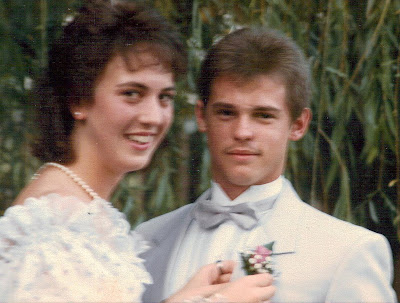 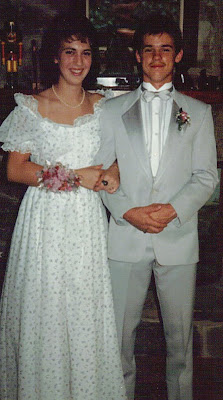 *For the record, he got high fives all day.

Next post: What Kind of Gift Should I Buy For An Eagle Scout?? (I’ll Tell You!)