The Day On Which I Pretended To Have Never, Ever Driven A Minivan At Any Point In My Life.

The older boy came home from school yesterday and announced, “I can get you an oil change at school tomorrow if you just go to the store and get a filter and a container of oil.”

My car has been overdue for an oil change for a few weeks now, and how lucky am I that I am the mother of a son who is taking Auto Mechanics class this semester?

I replied, “Really? That’s awesome! I’ll go out to the store in a bit!”

He looked at me and, in all seriousness, warned me, “Just make sure you get the correct oil and filter. They have to match your car.”

I laughed my fool head off, right in his face.

“Really, older boy? REALLY? Because I thought all filters were universal, and I could just buy any ole’ kind of oil.”

We sat there “Duh-ing” and taunting each other for a few minutes, both of us acting like idiots, really, and then I laughed and went to the store with Jim (Not to make sure I got the right stuff, mind you; he just got home from work early, OKAY? Seriously.).

Today, the boy drove to school with my car and the CORRECT oil and filter.

I, on the other hand, drove his car: 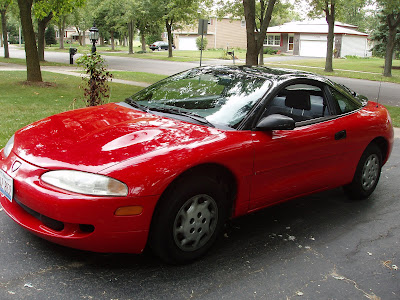 My instinct is to say, in describing this car, how “cute” it looks. But come on, this is my nearly-eighteen-year-old son’s car. Cute is not a word I should say, right? So I won’t. But I’m thinking it.

One of the things I like most about this car is the sound roar of the engine. It sounds like a Mustang. Or maybe that’s just me. You see, I’ve wanted a Mustang since my good friend Justin drove a bright red vintage one in high school. It rocked. I never turned down a ride to school in that baby, I can tell you that!

I even went as far as test driving one when I was shopping for my current car a few years ago. I took the boys to the Ford dealer and told them that I was thinking about getting one, and I needed to see how much room they had in the back.

The answer? Not much.

But I started her up anyway. The VROOM VROOM VROOOOOOOM was ever so pleasing to my ear, and gave me chills. The awesome sound also drowned out the kids’ responses when I asked them what they thought. I think they were saying something about how cramped they were in the back seat, and how uncomfortable it was, and how they were still growing, MOM!, but I could be wrong. It was hard to hear them over the revving of the engine.

In the end, of course, I didn’t buy the Mustang. I knew it wasn’t a sensible car for the mom of two growing teenaged boys. It’s okay, though: I’ll get one eventually.

While I was driving the older boy’s car today, I thought, “This is the closest I’ll get to driving a Mustang for a while”, a statement which I know is totally delusional, since an Eagle Talon is not anything close to a Ford Mustang. But in my head, that statement made total sense. I rolled down the window (only the driver’s side window, and by hand, mind you, since everything is manual), rested my arm on the edge, sat back in the driver’s seat and turned the radio up nice and loud as I lived in my (faux) muscle car-lovin’ world for just a little bit longer, before pulling up into the driveway and returning the car to its rightful owner.