Growing up, I was raised to be the nice girl, a rule follower, a goody-goody (SO not ashamed of that), a lady. 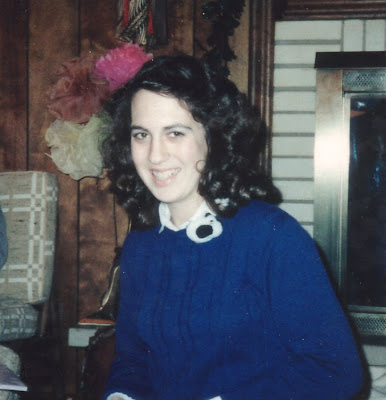 This photo could not have been taken with my trusty, dented, pink-duct-taped Olympus Camedia C-60 because it’s circa 1984. Just FYI. Also, check out how gorgeous (and thick) my hair was. Wish I still had hair like that. Oh, and ignore that little animal clipped onto my collar. Those were all the rage back then. What a stupid trend.

My parents had very high expectations of me, and I’m really grateful for that because I turned out to be a really awesome adult.

Unfortunately though, due to the combination of my parents’ high expectations, my perfectionist tendencies, and my strong desire to please other people, I shied away from confrontation and any form of sticking up for myself when it mattered. I was the person who always thought of a comeback or a snarky remark about ten minutes after the other person walked away from me. I was the person who let others walk all over me. I let them say whatever they wanted, and do whatever they wanted, even if I didn’t really think it was nice, or good, or if it worked for me. I was a follower, most of the time. These traits lasted well into my adult years.

Yesterday I was in the grocery store (where many an epiphany has come to me, for some reason), and I don’t know why but I found myself thinking about one of the most embarrassing exchanges I’ve ever had, and at that moment, I realized just how far I’ve come.

It was about fifteen years ago, and I was still in my twenties. I was working at the nursery in the small health club (my first position at the one I just got let go from last year). A photographer was brought in to take portraits of all of the employees so that each department would have a nifty frame on the wall containing these pictures, in order for the members to get to know us better. We in the nursery had, at the time, uniforms that consisted of these AWFUL baseball-style button-down jerseys that were so very ugly, but that’s another story. Anyway, the photographer was in the conference room and called on each of us individually. When it was my turn, I went to stand on the mark, and this is what he said to me:

“Wait, I’ve got to have you change your pose because you’re a heavier girl.”

And I said NOTHING. I smiled for the picture, and then walked out, probably saying “Byeeee!” as if he were a long-time friend who I had just spent the day with. And then I went home and cried, both at the insult and the fact that I didn’t say something to him about his insensitivity. And then, when the photos came back and my boss put them in the frame and put the frame up on the wall in the nursery, I got to stare daily at a picture that I hated as well as have a constant reminder of what I pushover I was.

One could argue that he didn’t do anything wrong: I was overweight. (I’m still overweight, but waaaaay more fit nowadays) He spoke the truth. But, number one, you never, EVER have to tell an overweight person that they are such. Believe me, we know. Number two, in the interest of being a professional, all he had to say OUT LOUD was “Wait, I’ve got to have you change your pose.” AND STOP THERE. I never would have known what he was thinking. Number three, in the interest of being a human being, he just plain shouldn’t have gone there.

I thought about that yesterday as I was pushing my cart down the aisles of the grocery store and knew without a doubt that I would have handled that situation very differently if it happened today. I don’t know if I changed magically around the time I turned 40 or if it was a gradual metamorphosis, but I stand up for myself now. If I don’t like something, I (tactfully) say it. If someone does something that bothers me, I usually let them know about it. The way I see it is, of course my friends and family have my back, but if I’m not going to stick up for myself, I’m cheating myself out of some hard-earned independence. When I feel like I’ve been wronged, I take it upon myself to make it right. And usually? It works out very well.

I have had a couple of confrontations in the last eighteen months that would never have happened in my twenties or thirties. These “riding the rage” moments simultaneously shocked me and made me really proud of myself. One of them was with a hateful woman who lives down the street from me; you regular readers will remember it as Dog Poogate, not because I called it that when I wrote it but because it just fits and it’s my blog so I can trigger your memory in any way I want. Heh.

The other one, way more memorable, was the time in which that hateful woman touched my meat. If you need a laugh and only have time for one, read that one.

My twenty-something self had a lot to learn. My thirty-something self was well on her way. My forty-something self is finding happiness now that I take an active role in standing up for myself (and my family), and though I wish I had been doing that all along, my life as I lived it is what got me to this point, and I wouldn’t trade my journey for the world.

Next post: Do What I Say, Not What I Do.