It Was A Great (Evan Lysacek) Day For A Rally

Yesterday I attended the rally in honor of Evan Lysacek, Vancouver 2010 Olympic figure skating gold medalist. The rally was held in downtown Naperville, Illinois as a part of “Evan Lysacek Day”. (As you have probably already guessed, Evan grew up in Naperville and that’s why he was given his very own Day.)

I had a great time, and thought you might want to come along on a trip down memory lane.

The rally was set to begin at 4:00 p.m., but you know how I am when it comes to waiting for celebrities: I like to be nice and early. Besides that, I know that whenever something special is going on in the downtown Naperville area, it’s like they’re giving away free money or something, and traffic and parking issues abound.

Knowing those facts as you now do, you will not be surprised in the least that I decided to arrive at the rally a full TWO HOURS EARLY. I’ve been sitting in my house at my laptop for weeks, working furiously to finish my book in every spare moment, so I thought that two to three hours outside was just what I needed. I packed a picnic lunch and a book (sadly, it wasn’t one for “fun”, it was research!), and drove to downtown Naperville.

As it turned out, I was one of only a handful of people who had the brilliant idea to arrive two hours ahead, and it paid off. I sat on the grassy base of Rotary Hill and ate my peanut butter and jelly sandwich, chips, and pickle*, looking at the rows of chairs that had been set up for the dignitaries and being a little sad that I wouldn’t be able to sit up close like the important people. Shortly thereafter, a little girl and her mother arrived, and the little girl asked one of the men who was testing the microphone if they could sit in the chairs.

“Sure”, he said. “Just don’t sit in the first two rows, because those are reserved.”

How exciting is that? I picked up my belongings and made my way up to the fourth row (so I could sit on the middle aisle) and waited. And waited. There was a lot going on, though. Commemorative posters were being sold for two dollars and a radio station set up their tent and DJ equipment behind us, and soon more people began to arrive. And more people. And more people.

At about 3:30, Evan’s bus arrived on the scene, and parked for a bit. The crowd whipped into a frenzy when the bus appeared, and a local news crew took that opportunity to tell everyone to “Keep cheering! Keep screaming! E-VAN! E-VAN! E-VAN!” They got their video, and everyone fell silent immediately. It was a little comical.

I was hoping Evan would come out early, but no such luck. 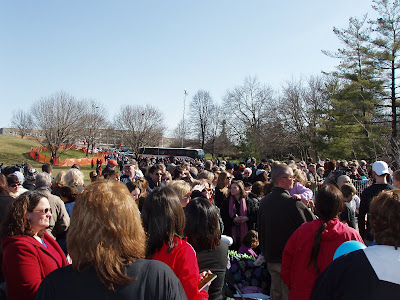 At 3:45, the carillon played its regular quarter-hour song, and between that, the sun, and the happy crowds, I was beside myself. Here are a few seconds, for your enjoyment:

AND THEN! FINALLY! OUR EXCITABLE, BELOVED MAYOR came out to introduce Evan to the crowds. Mayor Pradel (who just survived a heart attack last month, and was recently elected “Hottest Mayor” by listeners of a local radio station) is so much fun. He has enough enthusiasm for the entire Chicago area, and a speech given by him is never boring. I don’t have footage from yesterday but you should click here to see him in action (and then imagine that multiplied by about a thousand times, because that wasn’t anything compared to how animated he really is).

And then, Evan stepped out in front of everyone. (Some of the pictures are a little funky because the sun was shining right at me.) 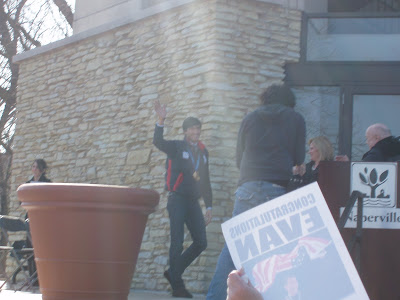 The cameras went wild, and the professional media all got right in his face, making it so all of us couldn’t see Evan, and, well, people started to get really, really angry, yelling “MOVE! WE CAN’T SEE HIM! EVAN, HELP US OUT!” I thought it was going to get violent for a minute, but finally the professionals moved so we could all see Evan. 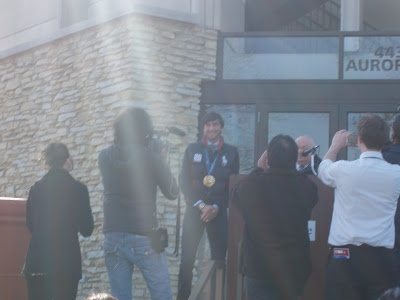 The carillon was set up to play the national anthem, and I have to say with everyone singing together in “light” voices, it was the sweetest national anthem I’ve ever been a part of. It felt nice to be there.

Evan spoke next, and introduced Anna Trebunskaya, his “Dancing With the Stars” partner! (She is beautiful!) He told the crowd how she will be following him around the country on the “Smuckers Stars on Ice” tour so they could practice. 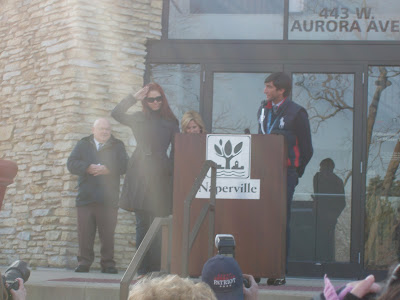 And then? They gave us a sample of the jive they just started working on! 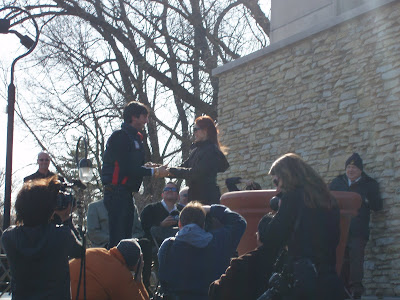 Evan took questions from the crowd. His favorite cheesecake? Seems like all kinds. He named about twenty varieties. Cubs fan or Sox fan? He diplomatically stayed neutral, saying that his parents love the Cubs and his sisters are Sox fans, and he loves his whole family so he just roots for the winner. Where did he skate when he lived here? He named the two main skating rinks in the area, and mentioned a nearby pond he used to skate on during the winter. Will he skate at the 2014 in Sochi, Russia? He thinks so, since he feels most comfortable on the ice, but added he might need security if he goes there. (haha) 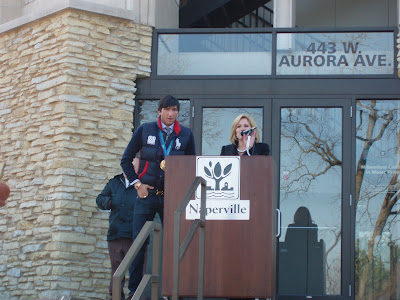 He told the story of how his sister used to be better at skating than he was, and his mom told him that when someone is better at something than you are, you have to work twice as hard, and that has remained his motto since then.

He thanked the community for their support, and he was very humble, and so gracious. He was really lovely. When asked what he would say to the kids out there, he was eloquent. His advice, paraphrased because I didn’t write it down at the time, is this: DO WHAT YOU LOVE. He told them:

Dream your biggest dream. If you want to do something, tell your parents, tell your teachers, tell everyone around you. They want to support you and they’ll do their part to help you get there, and you have to do your part, which means working hard, staying in school, and listening to your parents. And most of all, in THIS generation, know that anything is possible!

He was very inspirational. I wish you all could have been there. I’m so glad I went and was lucky enough to experience this up-close. It was a special afternoon for me, and as a lone blue balloon, released by a child, soared up into the sky next to the carillon, it cemented what Evan said. Great moment! 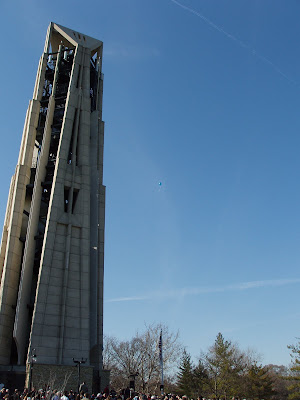 As I walked towards my car, I paused near the barricades where Evan, Anna, and their entourage were walking in order to get to their bus, and I got some closer shots. 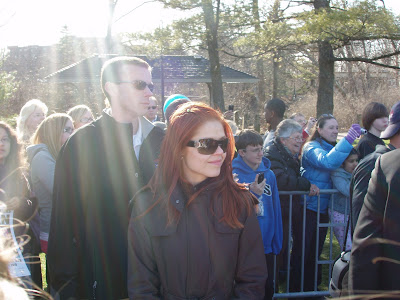 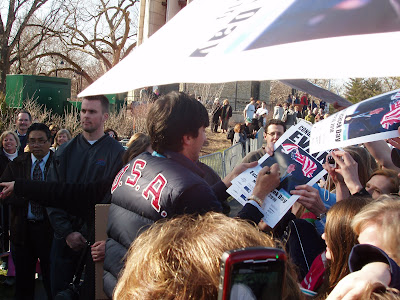 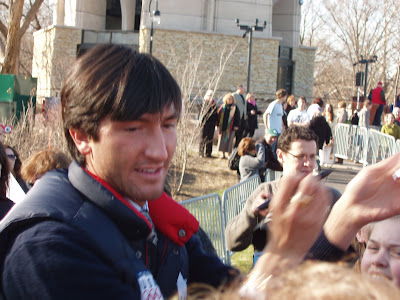 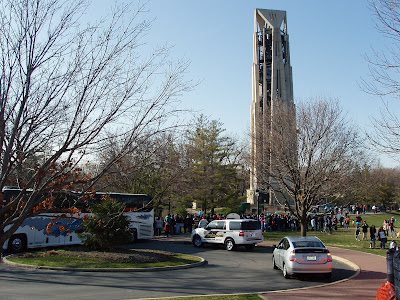 Which brings me to some news. I am now OFFICIALLY a contributor at the Chicago Moms Blog!

I am thrilled to be associated with the Silicon Valley Moms Group and their blogs, and my first post went up today. Click here to read it: it’s another perspective on the rally. The title? “Here’s What I Share With Evan Lysacek’s Mom.” I have to say, it’s one of my most favorite pieces of writing, EVER. You should check it out. Evan’s mom did**.

*WHY is it that PB&J always tastes better at a picnic? Discuss.
**We’re not Facebook friends but I did send her a message about the post and she sent me a lovely note saying that she liked it very much. Woot!

Next post: Here’s The Secret To Having A Super Passover Seder