What is it about teenagers, thinking that their parents were practically born in the Stone Age?

It is an unfortunate set of circumstances that led me to have to write, for the second time this week, about another instance in which I am accused of being older than the hills. To make it worse, the accuser wasn’t even one of my own children. Close, though: it was the younger boy’s best friend.

I was driving the two of them home from scouts on Monday night, and I decided to stop for Shamrock Shakes for the three of us (plus Jim and the older boy), to celebrate the grand news we had just received about the older boy’s college scholarship.

Yes, we celebrate with milkshakes. Shut up; they make me happy: 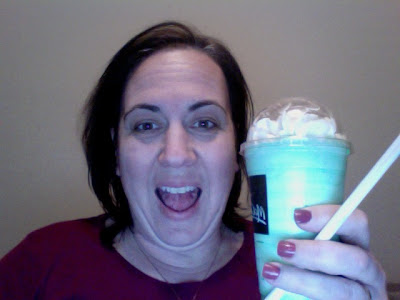 Anyway, where was I? Oh yes, on my way to McDonald’s.

As I was pulling up into the drive-thru lane, the younger boy stated, “It’s too bad that eating at McDonalds for every meal would make you gain a ton of weight*.”

I, being a former McDonald’s crew member and lifetime defender of the company itself, replied, “Well, it really depends on what you eat and how active you are. You know, when I worked there during high school, I worked double shifts over the summers and sometimes ate every meal of the day there. *I* didn’t gain weight**.”

And then the younger boy’s best friend piped in with what–if I were a violent person–could have been his last words:

“Well, they really didn’t have a lot of food choices way back then.”

“WHAAAAT?” I exclaimed. “What do you mean, WAY BACK THEN? I’m not THAT old. What exactly do you think was on the menu when I was your age?”

Not missing a beat, he said, “Probably just cheeseburgers and fries.”

Note that the younger boy knew that it was probably best for him to stay out of it; he didn’t say One. Word.

Suddenly I was a volcano, erupting with knowledge that he probably could have cared less about, but that had to be shared at that moment.

“Well, young man,” I said. “For your information, we had MORE than cheeseburgers and fries. We had…Big Macs. And…Quarter Pounders with cheese. In fact, at that time, Quarter Pounders WITHOUT cheese were still on the menu. We had the first generation of the ‘Big and Tasty’, which was called the McDLT. We even had the ‘McRib’ for a while. And Filet-o-Fish! We had that, too. AAAAAND, for your information, the last time McDonalds only had mainly cheeseburgers and fries available was when the chain first opened, back in the 1950’s. We learned that when we visited the McDonald’s #1 Store Museum over the summer.”

The younger boy’s best friend reacted in the only way a teenager who had just been shut down could react:

And once again, I was driving a car that was completely silent, punctuated only by the sound of milkshakes being sucked up through their straws.

The moral of this story?

Sometimes when we aim to prove how we are so NOT old, we prove that we are anyway.

*I believe his health class screened the movie “Supersize Me” last year.
**This was indeed a moment of irresponsible parental lecturing.

Next post: This One’s For Huckdoll, But You Can Enjoy It, Too.